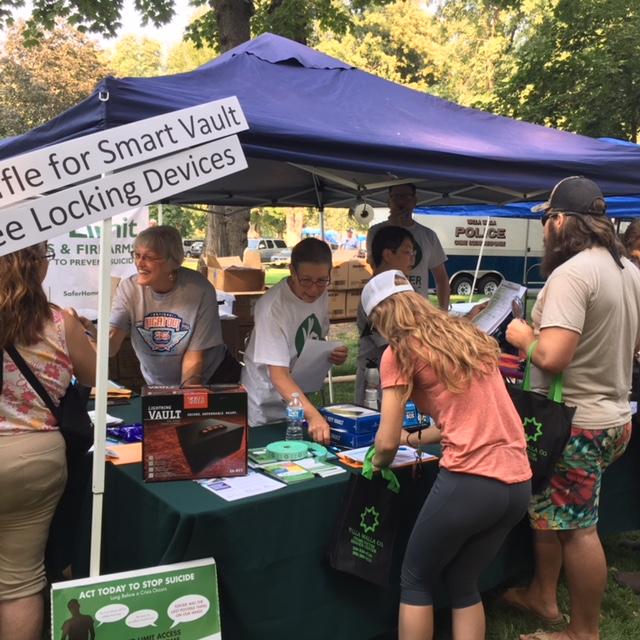 Talking to people at gun shows about suicide prevention and the risks of unsecured firearms can lead to safe weapons storage, according to a new study.

The research by Forefront Suicide Prevention at the University of Washington, from visits to 18 gun shows and other community events around Washington state last year, found that engaging people in a community-based setting, in an empathetic conversation focused on safety, resulted in more people locking up their firearms.

The results are promising, lead author and Forefront co-founder Jennifer Stuber said, because they show that meeting people where they’re at, physically and psychologically, can lead to behavior change that can prevent tragedy.

“We need to be educating people who own firearms or are considering purchasing them that suicide is a possible risk to take into consideration and to make plans in advance to mitigate these risks. So many people are in crisis today — from youth, to veterans, to our men in economic distress and in relationship turmoil — we are all vulnerable. We need to educate firearms owners, both experienced and new, at the point of purchase and other places we can find them to raise awareness,” said Stuber, an associate professor of social work at the UW.

According to national and state data, about half of all suicides involve firearms. In Washington state, three-quarters of all firearm fatalities are suicides, which most people aren’t aware of when they purchase a firearm, Stuber said. Suicide rates are higher among men than women, and higher among veterans than nonveterans. A 2019 Forefront study focused on the potential role of firearms retailers in preventing suicides, by evaluating store owners’ willingness to learn about the issue and train their employees in how to spot and act on suicide warning signs. That study found that many retailers were interested in learning more and adopting prevention strategies among their staff.

The new study tested an outreach strategy created by Forefront known as SAFER, an extension of its multi-faceted Safer Homes, Suicide Aware program, which offers training, education and locking devices for firearms and medications in communities across Washington.

Forefront’s trained staff and volunteers regularly provide suicide-prevention trainings tailored to students, teachers, parents, veterans, health care workers and pharmacists. In reaching out to visitors to gun shows — who are mostly men, often veterans — Forefront designed the brief, motivational interviewing approach it calls SAFER (Signpost, Assess, Facts, Emotion and Recommend) to both educate and listen with empathy. By talking with a person about their familiarity with issues surrounding suicide and their understanding of the risks of unsecured firearms, the volunteer can deliver a suicide-prevention recommendation that encourages safe firearms storage. The volunteer also provides the person with a free locking device for hand-guns, rifles or AR-15s to take home.

In this study, 1,175 people received the SAFER intervention. They took a short, written survey to assess knowledge of firearms safety and suicide prevention prior to the SAFER conversation. Most SAFER encounters took about 10 to 20 minutes each.

Four weeks later, Forefront emailed a survey to people who received the intervention. Of the 372 who completed the survey, 66% said they now kept their firearms secure at home, a 15 percentage-point increase from the 51% who reported doing so during the pre-intervention survey.

“To my knowledge, this is the first study to assess receptiveness to suicide prevention messages and self-reported change in firearm storage behavior at gun shows,” said Ali Rowhani-Rahbar, an associate professor of epidemiology and co-director of the Firearm Injury and Policy Research Program at the UW. Prior studies had focused on clinical or other community settings, including those in Washington state. “This study is novel not only due to its outreach to participants in gun shows, but also because of its empathetic approach to engage them in conversations about suicide prevention. It can serve as a model for other regions of the country to use similar approaches and broaden the inclusion of individuals who might be at high risk of suicide in their outreach and prevention programs.”

Initially, people may not think suicide-prevention awareness applies to them, Stuber said. But that’s a key message of the intervention: Life circumstances can and do change. Even if you never have thoughts of suicide, it’s critical to have a plan to protect yourself, your family, even friends or strangers who visit your home by locking up firearms and medications and understanding what to do if you are someone you care about is at risk.

As part of the SAFER intervention, volunteers also offered a locking device for medications. In the pre-intervention survey, 15% of participants said they safely stored medications — a proportion that grew to about 22% afterward, according to the study. Even a modest increase shows a positive impact, Stuber noted, and provides important information for enhancing the strategy going forward. Currently, the emphasis is on locking up firearms, which is the main goal for the audience and the setting.

Forefront continues to improve SAFER to hone in on the demographics of the person receiving the intervention and to tailor the message accordingly, Stuber said. For example, if the individual has children, the volunteer can focus on the risks of a child gaining access to a firearm and emphasizing the need for a fast-access firearm locking device, which participants also receive education about through a raffle at gun shows.

Another key is to expect emotion, Stuber added. People routinely shared personal experiences with suicide or concerns about friends or relatives, which could end up being an opportunity to counsel or provide resources beyond the individual receiving the SAFER intervention.

“We don’t want to firehose people with facts and statistics. We should be listening more than talking,” Stuber said.

During the COVID-19 pandemic, Forefront has begun offering a “tele-SAFER” intervention, as well, through individualized Zoom sessions facilitated by veterans organizations and nonprofit groups, Stuber said.

The study was funded by a Boeing Global Engagement Grant and the Washington state Legislature. Co-authors were Brett Bass and Morgan Meadows of Forefront; and Anne Massey, a graduate student in the UW Department of Epidemiology.