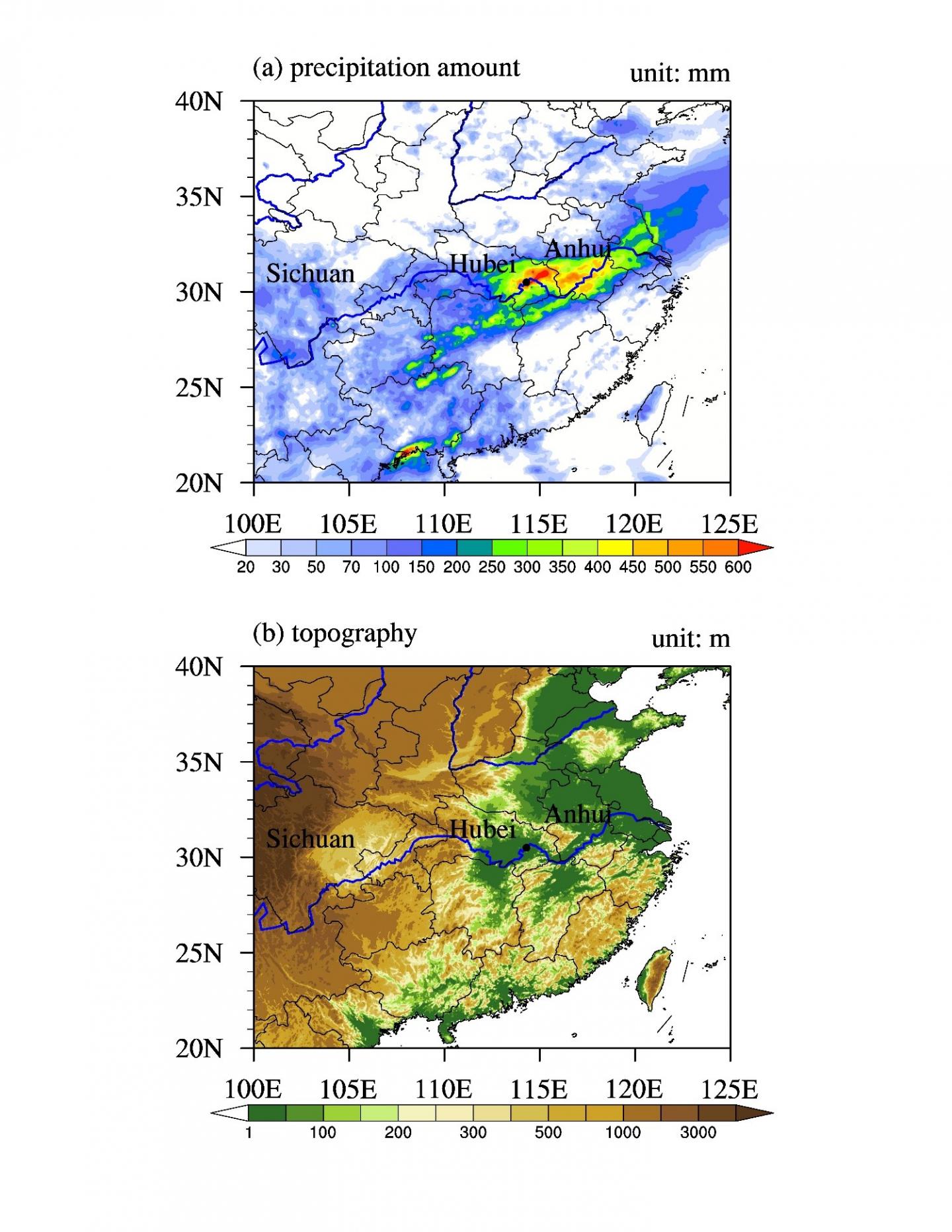 The middle and lower reaches of the Yangtze River Basin (YRB-ML) generally enter the Mei-yu season in the period from mid-June to mid-July. During the Mei-yu season, the YRB-ML often experiences heavy rainfall due to convective systems, which occur and propagate eastward repeatedly in a narrow latitudinal corridor, thereby enhancing their capacity for causing catastrophic flooding.

In the summer of 2016, a particularly heavy rainfall event hit the YRB-ML during the period from 30th June to 6th July, with a record-breaking rainfall amount of 582.5 mm in Wuhan (30.60°N, 114.30°E; the provincial capital city of Hubei province, please see Figure 1). Due to its relatively lower topography compared to surrounding regions, Wuhan suffered a terrific flooding disaster which inundated many roads, trapping residents inside vehicles and buildings. Overall, the event left about 237 dead and 93 missing, affected more than ten provinces and resulted in over $22 billion in damage, making it a high-impact weather event of international significance.

Previous study using global model at relatively coarse resolution can generally simulate the spatial distribution of accumulated precipitation amount of this heavy rainfall event, but considerable model biases still exist. Recently, under the Climate Science for Service Partnership (CSSP China), supported by the UK-China Research and Innovation Partnership Fund, researchers from the Institute of Atmospheric Physics at Chinese Academy of Sciences, have collaborated with colleagues from the Chinese Academy of Meteorological Sciences at China Meteorological Administration, and the UK Met Office, to investigate this event at both global and regional scale by using the Met Office Unified Model (MetUM). Especially, they used high-resolution convection-permitting model (CPM) at regional scale.

Their results show that both the global driving model and convection-permitting model (CPM) can successfully simulate the accumulated amount and the evolution of this heavy rainfall event by using the Transpose-AMIP integration type. However, the global model produces too much light rainfall, fails to simulate the small-scale features of both atmospheric circulations and precipitation, and afternoon precipitation is also excessively suppressed in the global model. More importantly, it tends to generate steady and excessive heavy rainfall over mountainous regions. By comparison, the CPM added some value in reproducing the spatial distribution of precipitation, the smaller-scale disturbances within the rain-bands, the diurnal cycle of precipitation and also reduce the spurious topographical rainfall. “Enhancement of rainfall mountainous terrain is a key factor in this region, our study highlights the importance of getting these effects ‘right’ in models for accurately predicting extremely heavy rainfall”, said Dr. Puxi Li, the paper’s lead author.

The study proves the added value of the convection-permitting model in simulating heavy rainfall event. Researchers plan to go further, “In the future we will use the information in this study to improve global models. More sensitivity tests will also be performed, focusing on the impact of different physical process, such as planetary boundary layer and cloud microphysics”, Dr. Kalli Furtado, the corresponding author of the study, added.

This work was recently published in the Quarterly Journal of the Royal Meteorological Society.

The UK-China Research and Innovation Partnership Fund is a bilateral partnership between the UK and China. It is funded in China by a range of partners and in the UK by the Newton Fund.

The Newton Fund builds research and innovation partnerships with 17 active partner countries to support economic development and social welfare, and to develop research and innovation capacity for long-term sustainable growth. It has a total UK Government investment of £735 million up until 2021, with matched resources from the partner countries. The Newton Fund is managed by the UK Department for Business, Energy and Industrial Strategy (BEIS), and delivered through 15 UK delivery partners, which include the Research Councils, the UK Academies, the British Council, Innovate UK and the Met Office. For further information visit the Newton Fund website and follow via Twitter: @NewtonFund.

New book on next-generation sequencing in medicine from CSHL Press