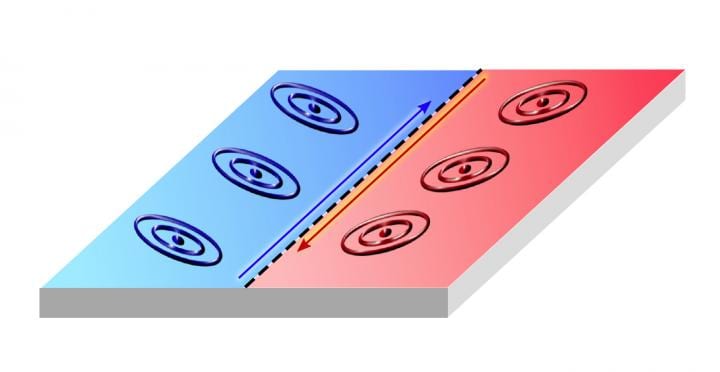 Princeton researchers have demonstrated a new way of making controllable “quantum wires” in the presence of a magnetic field, according to a new study published in Nature.

The researchers detected channels of conducting electrons that form between two quantum states on the surface of a bismuth crystal subjected to a high magnetic field. These two states consist of electrons moving in elliptical orbits with different orientations.

To the team’s surprise, they found that the current flow in these channels can be turned on and off, making these channels a new type of controllable quantum wire.

“These channels are remarkable because they spontaneously form at the boundaries between different quantum states in which electrons collectively align their elliptical orbits,” said Ali Yazdani, the Class of 1909 Professor of Physics and director of the Princeton Center for Complex Materials, who headed the research. “It is exciting to see how the interaction between electrons in the channels strongly dictates whether or not they can conduct.”

The researchers used a scanning tunneling microscope – a device capable of imaging individual atoms and mapping the motion of electrons on a material’s surface – to visualize electron behaviors on the surface of a crystal made of pure bismuth.

With this instrument, the team directly imaged the electrons’ motions in the presence of a magnetic field thousands of times larger that of a refrigerator magnet. The application of the large magnetic field forces electrons to move in elliptical orbits, instead of the more typical flow of electrons parallel to the direction of an electric field.

The team found that the conducting channels form at the boundary, which they call a valley-polarized domain wall, between two regions on the crystal where the electron orbits switch orientations abruptly.

Mallika Randeria, a graduate student in the Department of Physics, who carried out the experiments, said: “We find that there are two-lane and four-lane channels in which the electrons can flow, depending on the precise value of the magnetic field.” She and her colleagues observed that when electrons are tuned to move in a four-lane channel, they get stuck, but they can flow unimpeded when they are confined to only a two-lane channel.

In trying to understand this behavior, the researchers uncovered new rules by which the laws of quantum mechanics dictate repulsion between electrons in these multi-channel quantum wires. While the larger number of lanes would seem to suggest better conductivity, the repulsion between electrons counter-intuitively causes them to switch lanes, change direction, and get stuck, resulting in insulating behavior. With fewer channels, electrons have no option to change lanes and must transmit electrical current even if they have to move “through” each other–a quantum phenomenon only possible in such one-dimensional channels.

Similar protected conduction occurs along the boundaries of so-called topological states of matter, which were the subject of the 2016 Nobel Prize awarded to Princeton’s F. Duncan Haldane, the Sherman Fairchild University Professor of Physics. The theoretical explanation for the new finding builds on earlier work carried out by two members of the team, Siddharth Parameswaran, who was then a graduate student at Princeton and is now an associate professor of physics at Oxford University, and Princeton’s Shivaji Sondhi, professor of physics, and collaborators.

“Although some of the theoretical ideas we used have been around for a while, it’s still a challenge to see how they fit together to explain an actual experiment, and a real thrill when that happens,” Parameswaran said. “This is a perfect example of how experiment and theory work in tandem: Without the new experimental data we would never have revisited our theory, and without the new theory it would have been difficult to understand the experiments.”

The research was funded by the Gordon and Betty Moore Foundation, the U.S. Department of Energy Office of Basic Energy Sciences, the U.K. Foundation and the National Science Foundation.

Millions of tons of plastic waste could be turned into clean fuels, other products

What happens under the Yellowstone Volcano