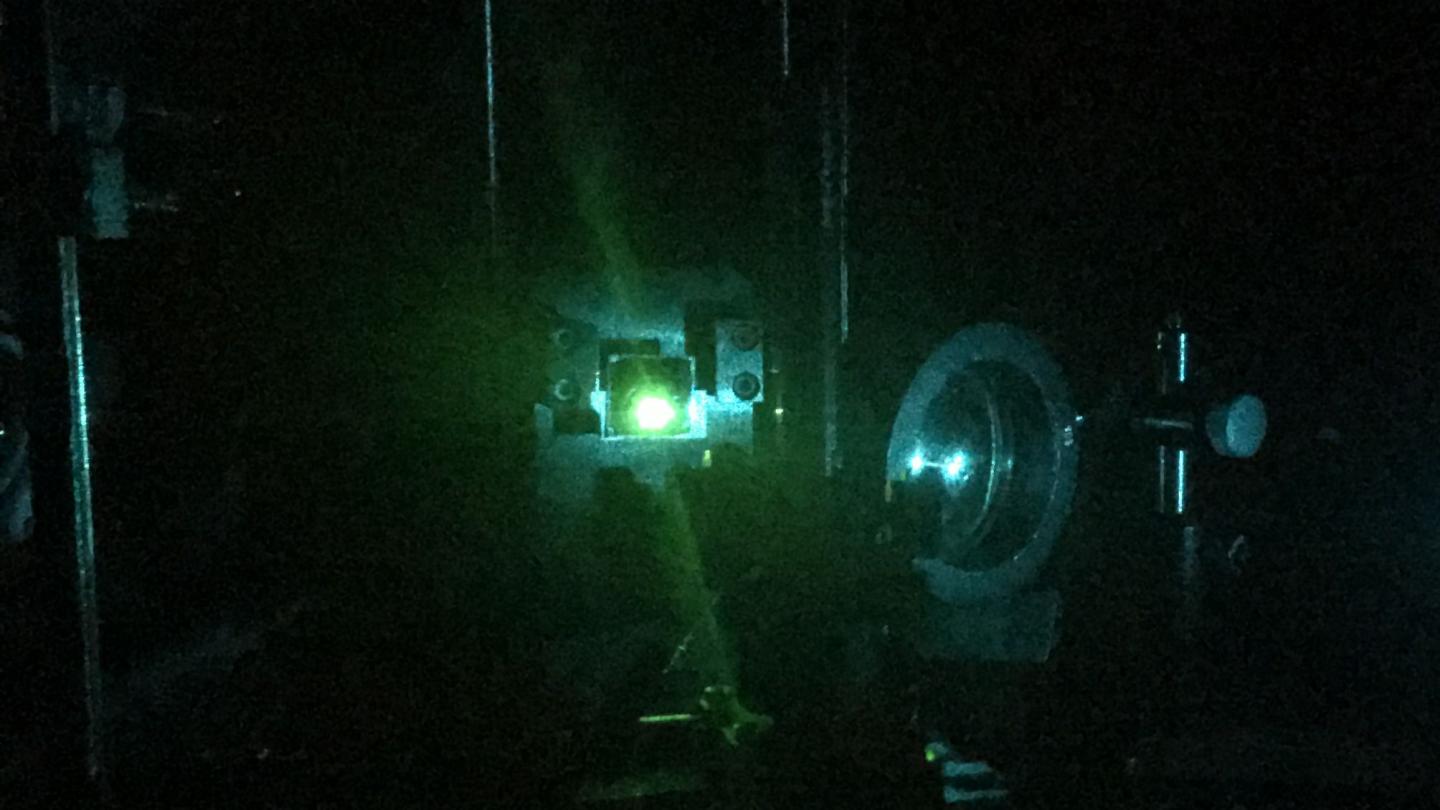 An international team of researchers led by Kyushu University and Changchun Institute of Applied Chemistry, Chinese Academy of Sciences, has demonstrated stable, continuous lasing at room temperature for over an hour from a class of low-cost materials called perovskites by finally overcoming a phenomenon that has so far prevented such long operation.

Used in everything from manufacturing and research to communications and entertainment because of their highly uniform light emission, lasers are often classified by the material in them that converts input energy–usually either light or electricity–into light, with common materials including inorganic and organic semiconductors, gases, and crystals.

Recent developments in a class of materials known as perovskites have made them attractive for lasers because they can be fabricated from solution at low cost to have tunable colors and excellent stability, but a phenomenon termed lasing death causes lasing under constant operation at room temperature to stop after a few minutes for reasons that have been unclear.

Now, researchers from Kyushu University and Changchun Institute of Applied Chemistry report in the journal Nature that they have managed to overcome lasing death in quasi-2D perovskites by taking into consideration energetic states called triplet excitons.

“The realization of lasers based on organic semiconductors has primarily been impeded by losses caused by the buildup of triplets. However, the situation for triplets in quasi-2D perovskites had yet to be fully considered,” says Chuanjiang Qin, professor of Changchun Institute of Applied Chemistry, Chinese Academy of Sciences, and lead researcher on the study.

While energy in optoelectronic devices is often considered in terms of positive and negative charges, opposite charges can also come together and temporarily form an energetic state called an exciton before releasing their energy. Excitons are frequently observed in organic semiconductors and, because of quantum mechanics considerations, most often fall into two types termed singlets and triplets, with light emission being nearly impossible for triplets.

The quasi-2D perovskites the researchers studied are a combination of inorganics and organics, with regions of perovskite crystals consisting of the same components repeated in every direction sandwiched between organic sheets. The team recently found evidence of triplet excitons with long lifetimes of nearly one microsecond in the materials, so they focused on triplets as the possible cause of the lasing death.

“Triplets do not emit light and have a tendency to interact with light-emitting singlets in a way that causes both to lose their energy without producing light,” explains Qin. “Thus, if triplets are present in perovskites, we likely need to get them out of the way so they do not interfere with lasing.”

To do this, the researchers incorporated into the perovskites an organic layer that holds triplets in a low energy state. Because the excitons want to move to lower energies, the long-lived triplet excitons transfer from the light-emitting portion of the perovskite to the organic layers, thereby reducing losses and allowing lasing under constant optical excitation to continue without interruption. Alternatively, the researchers found they could also obtain continuous lasing by simply putting the perovskite layer in air since oxygen can destroy triplets, further confirming that losses caused by triplets are one possible cause of lasing death.

In their best optically powered devices, intensity of lasing under continuous operation was almost unchanged after one hour at room temperature in air with a relative humidity of 55%, and the lasing spectra maintained its narrowness without shifting.

“We have demonstrated the key role of triplets in the lasing process of these types of perovskites and the importance of managing triplets to achieve continuous lasing,” says Chihaya Adachi, director of Kyushu University’s Center for Organic Photonics and Electronics Research and leader of the Kyushu University team. “These new findings will pave the way for the future development of a new class of electrically operated lasers based on perovskites that are low cost and easily fabricated.”