Consumption of caffeinated energy drinks rises in the United States 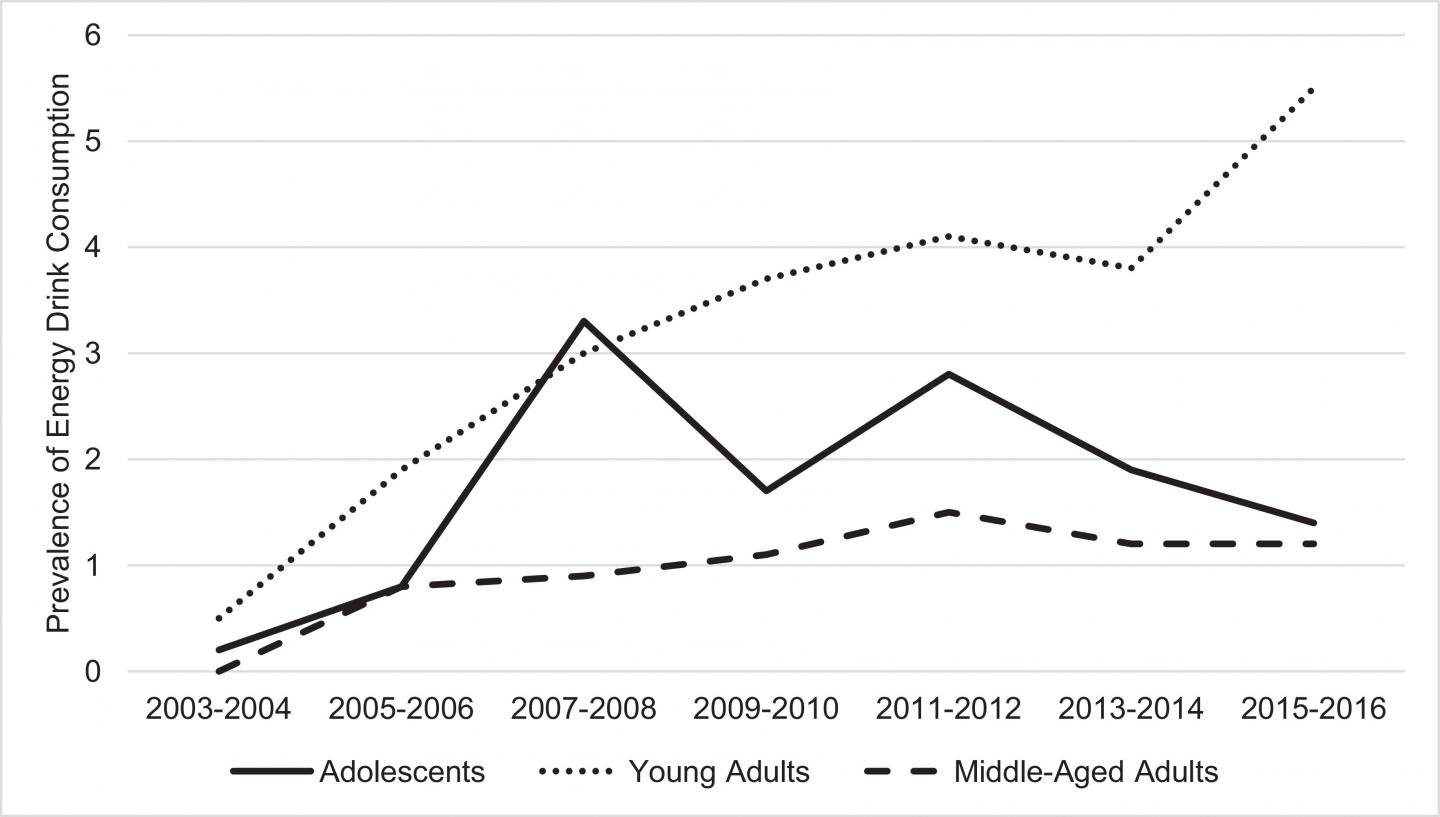 Ann Arbor, April 29, 2019 – According to a new study appearing in the American Journal of Preventive Medicine, published by Elsevier, energy drink consumption in the United States has increased substantially over the past decade among adolescents, young adults, and middle-aged adults. Energy drink consumers had significantly higher total caffeine intake compared with non-consumers and the beverages represented a majority of their total daily caffeine. While the findings indicate that daily intake among adolescents and middle-aged adults may be leveling off and overall use across all groups is relatively limited, use by young adults continues to steadily rise.

“The increasing use of energy drinks, especially among young adults, is cause for concern and warrants continued study and surveillance,” explained senior author Sara N. Bleich, PhD, Department of Health Policy and Management, Harvard T.H. Chan School of Public Health, Boston, MA, USA. “Although the beverages are marketed to reduce fatigue and improve physical and mental performance, frequent consumption of these highly caffeinated and sugary beverages has been linked to negative health consequences.”

Energy drinks are non-alcoholic beverages that contain caffeine, other plant-based stimulants (e.g., guarana), amino acids (e.g., taurine), herbs (e.g., ginkgo biloba), and vitamins. Introduced to US markets in 1997, their caffeine content ranges from 50 mg to 500 mg per serving, compared to 95 mg for an eight-ounce cup of coffee. Although moderate caffeine intake (up to 400 mg/day for adults and 100 mg/day for teens) is considered safe, higher volumes may increase the possibility that individuals will engage in risk-seeking behaviors, experience mental health strains like increased depression, and/or adverse cardiovascular effects like increased blood pressure. Added sugar in many of the energy drinks may also increase risk for obesity, type 2 diabetes, and dental caries. Mixing energy drinks with alcohol, which is growing in popularity among young adults, can lead to overconsumption of alcohol and incidence of alcohol-related events (e.g., car accidents).

Although US Food and Drug Administration (FDA) regulations require that energy drink labels indicate if the product contains caffeine, the FDA does not impose a caffeine limit or require reporting of the actual level of caffeine. While some energy drink companies are taking part in voluntary labeling initiatives, Dr. Bleich noted, “Our findings point to the need for an evidence-based upper caffeine limit and consistent labeling on these beverages to reduce the potential negative health impact on consumers.”

The analysis used data from the National Health and Nutrition Examination Survey (NHANES), a repeated cross-sectional study that is representative of the American non-institutionalized population. The study sample included data for 2003-2016 from 9,911 adolescents, 12,103 young adults, and 11,245 middle-aged adults. Because it was necessary to pool data across the seven survey cycles to ensure a sufficient analytic sample, it was only possible to examine differences in the prevalence of energy drink consumption by sex, race/ethnicity, and educational attainment category for all years combined.

Notably, middle-aged Mexican Americans and young adults with low educational attainment were found to have the highest prevalence of energy drink consumption. “This important finding signals the need for targeted policy and programmatic efforts among these groups,” added Dr. Bleich.

New records show spread of parasitic deer flies across the US