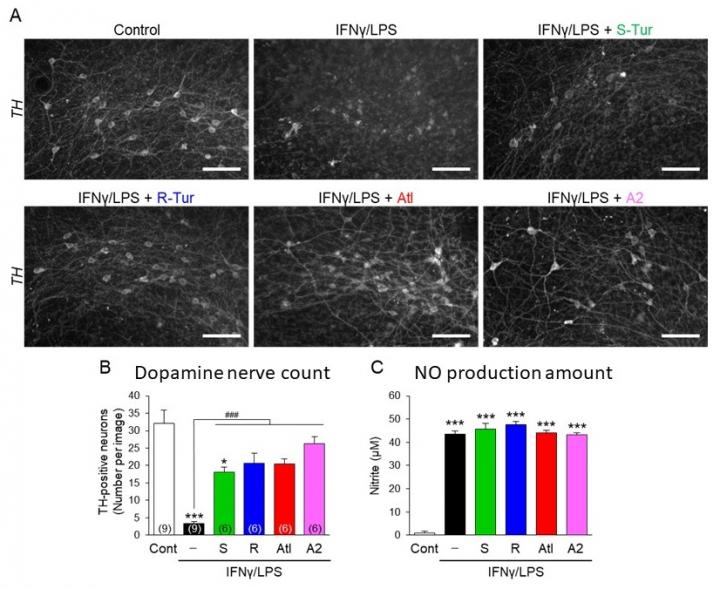 Researchers from Kumamoto University, Japan have found that a component derived from turmeric essential oil, aromatic turmerone (ar-turmerone), and its derivatives act directly on dopaminergic nerves to create a neuroprotective effect on tissue cultures of a Parkinson’s disease model. This appears to be due to enhanced cellular antioxidant potency from the activation of Nrf2. The researchers believe that the ar-turmerone derivatives identified in this study can be used as new therapeutic agents for Parkinson’s disease.

Parkinson’s disease is a neurodegenerative disease caused by the selective death of dopaminergic neurons that transmit information from the substantia nigra of the midbrain to the striatum which results in decreased dopamine production. Symptoms include limb tremors, immobility, muscle rigidity, and other movement disorders. Treatments, such as dopamine supplements, are currently available but there still no way to inhibit dopaminergic neurodegeneration.

Previous studies have reported that the inflammatory response caused by the activation of microglia (cells responsible for immune function in the brain) is observed in the substantia nigra of the midbrain of Parkinson’s disease patients. Further experiments designed to mimic the in vivo state of the midbrain (midbrain slice culture) revealed that microglial activation triggers the selective degeneration of dopaminergic neurons in the substantia nigra, and that nitric oxide (NO) derived from activated microglia was involved in the neurodegeneration. These findings suggest that compounds with anti-inflammatory effects on microglia may suppress dopaminergic degeneration.

“Our study elucidated a new mechanism by which ar-turmerone and its derivatives directly protect mesencephalic slice dopaminergic neurons, independent of their previously reported anti-inflammatory effects on microglia,” said Associate Professor Takahiro Seki, who led the study. “We showed that two derivatives, Atl and A2, exhibit neuroprotective effects by increasing the expression of antioxidant proteins through the activation of Nrf2. In particular, the analog A2 identified in this study is a potent activator of Nrf2 and is assumed to have a strong antioxidant effect. We think it is possible that this compound may be a new dopaminergic neuroprotective agent for Parkinson’s disease treatment, and it could also be used to treat other diseases caused by oxidative stress, such as liver and kidney diseases.”

This research was posted online in Cells on 3 May 2021.