Inside the giant engines in the world’s largest ships are huge heat exchangers made of cast iron; for the first time, a new project is looking for an inexpensive composite substitute for the classical iron components, which can cost vast sums to maintain 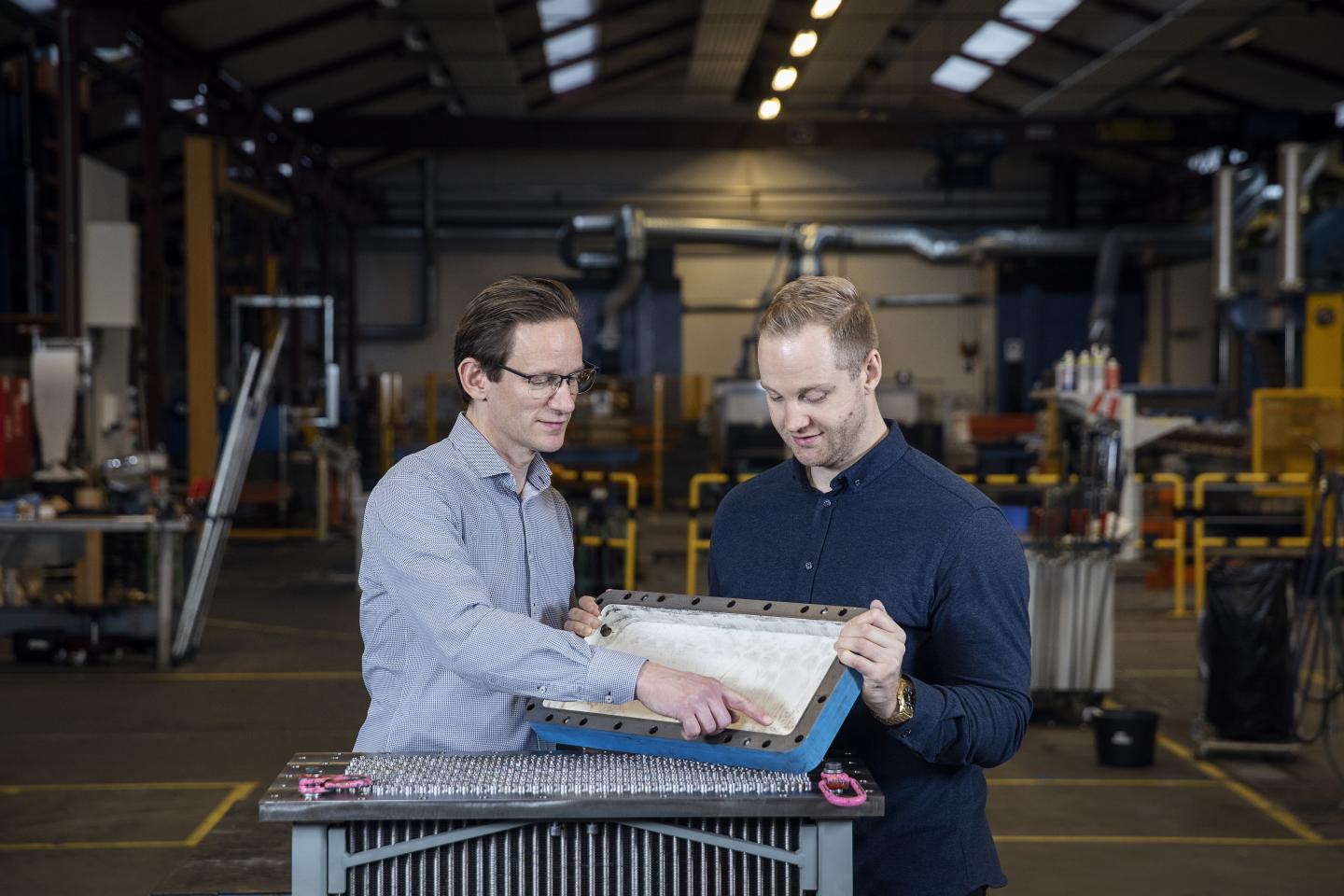 Inside the massive engines in the world’s largest ships are huge heat exchangers made of cast iron. For the first time, a new research project is looking for an inexpensive composite substitute for the classical iron components, which can cost vast sums to maintain.

Danish Vestas Aircoil and the Department of Engineering at Aarhus University have joined forces to find an alternative to the extremely heavy heat exchanger constructions, which for decades have been a central component in huge, turbocharged marine engines.

The aim is to reduce the weight of end plates on heat exchangers which, on the largest engines, can be several metres high and weigh hundreds of kilos. This is the first time anyone has tried to replace the classical cast iron plates.

“We’re going into unexplored territory. Of course, today there’s many alternatives to cast iron, but these are very expensive metal alloys. This is the first time anyone has tried to find a cheaper or corresponding composite solution, but it’s not easy, because the conditions are so harsh,” says Simon Heide-Jørgensen, industrial postdoc on the project, which is being supported by Innovation Fund Denmark and goes by the name of comMEC (Durability of COMposite end plate for Marine Engine Cooler).

“The material we’re looking for must be able to withstand water, salt water, vibrations, high pressure and high temperatures. Not only for a short period of time, but for many years to come. And it should also be a good match in terms of the price of the current solution we’ve been using for so many years.”

There is plenty of financial incentive to find an alternative to cast iron. Today, a leak in the system means the engine has to be stopped and the plates have to be opened to find the fault. But the plates are so heavy that they require specialised personnel and tools. Which can be time-consuming and costly. At the same time, the ship is still costing thousands of dollars every day in downtime.

“It’s ridiculously expensive, so we’re working on finding a solution to make it much easier to handle the plates. We hope to be able to reduce their weight significantly,” says Simon Heide-Jørgensen.

Furthermore, cast iron does not work very well with salt water, so today, to avoid rusting, the entire system is treated with expensive chemicals.

“The main objective of the project is to find a proof of concept for a new material and design for an end plate that can withstand everything, and we want to predict the impact on the plate of long-term exposure to the harsh conditions. From here, the plan is to take the material forward, and hopefully in the long run create a lighter and stronger construction that doesn’t need the chemical treatment,” he says.

The ComMEC project is being headed by Associate Professor Michal Budzik from the Department of Engineering, Aarhus University and R&D Manager Claus Hessler Ibsen from Vestas Aircoil.

Increasing transparency in the healthcare sector: More might not be better

Teams of microbes are at work in our bodies. Here’s how to figure out what they’re doing

Solving the longstanding mystery of how friction leads to static electricity