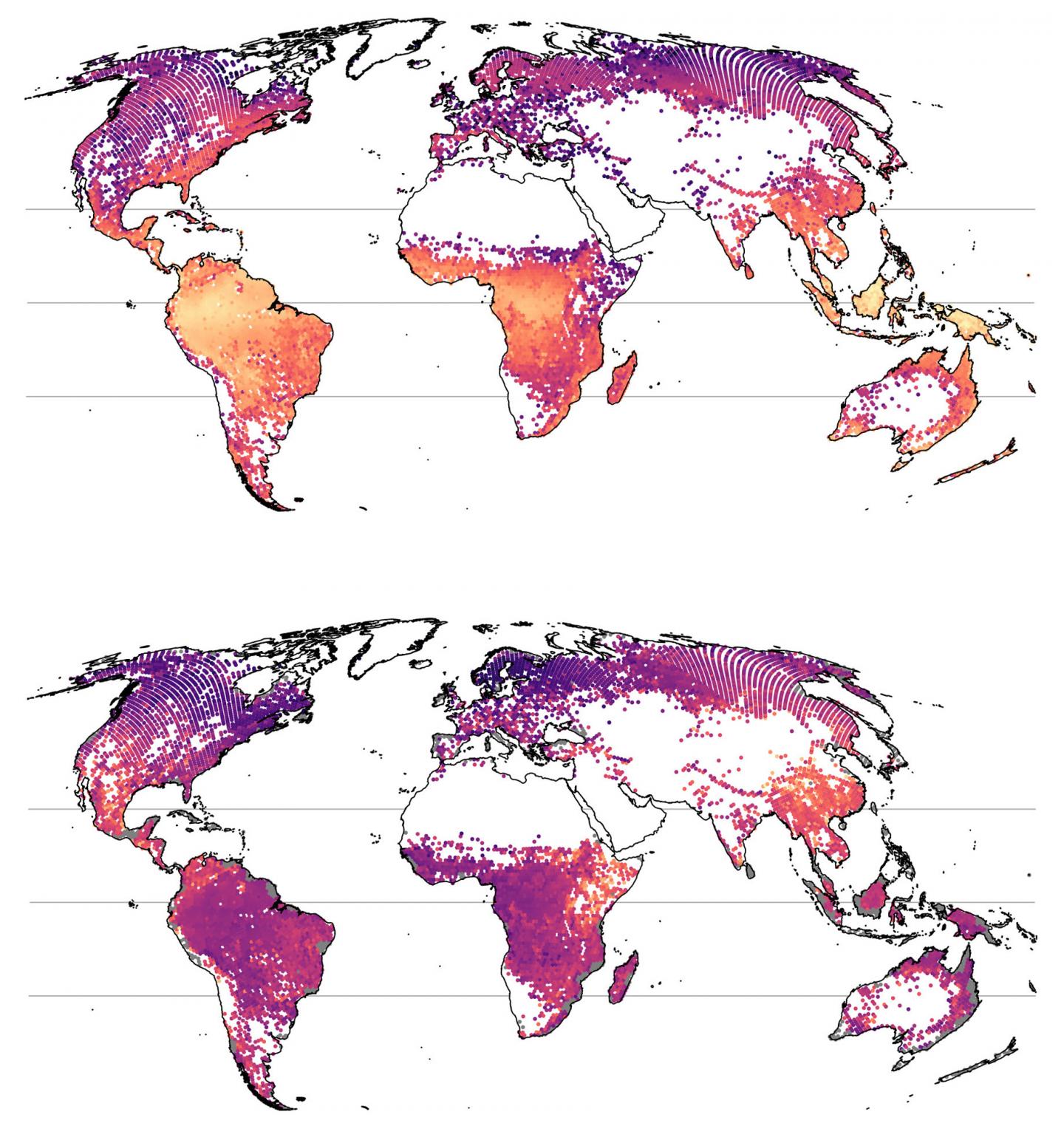 Leipzig, Halle. The biodiversity of our planet is one of our most precious resources. However, for most places in the world, we only have a tiny picture of what this diversity actually is. Researchers at the German Centre for Integrative Biodiversity Research (iDiv) and Martin Luther University Halle-Wittenberg (MLU) have now succeeded in constructing, from scattered data, a world map of biodiversity showing numbers of tree species. With the new map, the researchers were able to infer what drives the global distribution of tree species richness. Climate plays a central role; however, the number of species that can be found in a specific region also depends on the spatial scale of the observation, the researchers report in the journal Nature Ecology and Evolution. The new approach could help to improve global conservation.

Around the world, biodiversity is changing dramatically and its protection has become one of the greatest challenges mankind is facing. At the same time, we still know very little about why some places are biologically diverse while others are poor, and where are the most biodiverse places on Earth. Also, the reasons why some areas are more species-rich than others are often unclear: what role do environmental factors like climate play, and how important are historical factors like past ice ages for the biodiversity we are observing today? Our knowledge is based on scattered local surveys and is full of gaps; especially in tropical regions, where biodiversity can be particularly high. Closing all gaps by comprehensively surveying the whole planet, is, however, simply impossible.

Satellite imagery can close some data gaps; for example, when collating information on forest cover, but these techniques have their limits. “We don’t have to just count the trees, we also need to identify what species they are,” explains Dr Petr Keil, lead author of the new study. “In the tropics, we find hundreds of different tree species in a single hectare. We can identify these only on site. Therefore, most areas haven’t been surveyed for biological diversity – and probably never will be.” Keil and co-author Prof Jonathan Chase are scientists at the German Centre for Integrative Biodiversity Research (iDiv) and at the Martin Luther University Halle-Wittenberg.

Despite the patchy data, Keil and Chase wanted to create a world map of tree species richness. In a first step, they compiled well over 1,000 lists of tree species. These came either from small forest plots which had been surveyed in previous studies, or from whole countries. For most countries in the world, it is known which tree species can be found there, but not where exactly, and also it is often unclear whether specific species are rare or common. In order to be able to calculate the number of tree species for the extensive blank spaces on the map, the researchers developed a statistical model. The trick is that the model combines the available patchy information on the surveyed plots with the information on the country level and also integrates established data on environmental factors like climate. The result is a complete map of biodiversity in all the forested areas in the world.

“It was like a 1000-piece puzzle that we only had a few pieces of, and we didn’t even know what the big picture was,” says Jonathan Chase. “With our approach, we were able to calculate the missing pieces and put the puzzle together.” Using the new method, the researchers can calculate the number of tree species for areas of different sizes; a nature reserve, a country or an entire continent. This enabled them to investigate the underlying causes of the variation of tree diversity on our planet. Their analysis revealed that climate is the most important factor; the highest number of tree species can be found in the hot, humid tropics. Nevertheless, the number of tree species also varies across different places with the same climate, in some cases quite substantially. In southern China, for example, the researchers see a much higher diversity than in other regions with a similar climate.

Importantly, however, just how much ‘extra’ diversity one finds in places like China depends on the view of the observer. “If you’re standing in a forest counting the number of species around you, you might not even notice the difference between China and other climatically similar areas. However, when you move from one site to the next and add up species observed across many sites, the difference really pops out”, Jonathan Chase says.

This disparity between adjacent areas is called beta diversity. Within a larger region it leads to a high total diversity. Keil and Chase have shown in their analysis that this measure of diversity is particularly high in the dry (not wet) tropics, especially in mountainous areas like in southern China, Mexico, or in the Ethiopian highlands. One reason for this high beta-diversity might be events in the geological past, like ice ages. “During the last glaciation, the trees could survive only in mountain valleys, and different populations were isolated from each other as a result,” explains Petr Keil. “If you stand in one of these valleys today, you see a medium number of tree species. But if you climb over the ridge and hike down into the neighbouring valley, you find different tree species, and still others in the next valley.”

Keil and Chase are primarily concerned with understanding how biodiversity is distributed on the planet and what factors are driving it. But their model can also be useful for developing strategies for conservation, especially in forests where tree diversity has not been heavily influenced by humans. For example, in the case of the mountains of China, protecting only one valley is not enough; it is the diversity of different valleys which gives this area its high biological value. “In order to really understand and protect biodiversity, we have to look at the local and regional scale at the same time,” says Keil. “That is, we need both the perspective of a naturalist standing in a forest and the big picture of an entire country. Our approach now enables that”.

Who should Fido fear? Depends on relationship