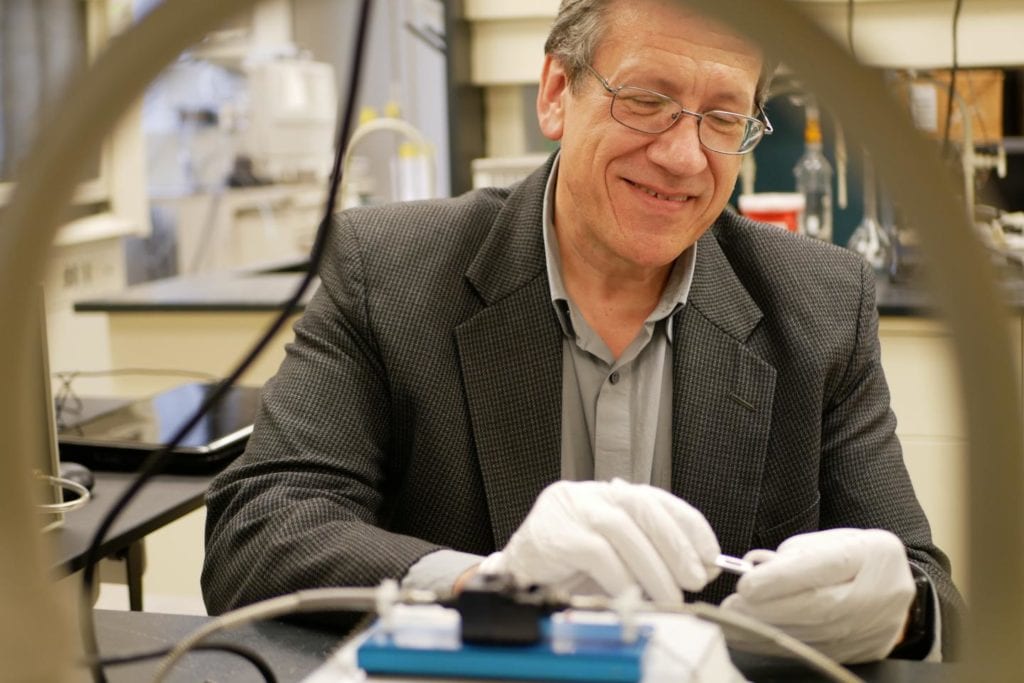 As far back as World War I, militaries have used large-scale chemical weapons in warfare. A number of treaties have banned these chemical agents since then, but chemical warfare still manages to make headlines today. In 2013, the Syrian military used sarin gas to devastating effect during the country’s civil war.

With troops deployed around the world, the U.S. military seeks to ensure soldiers’ safety against potential chemical attacks. University of Cincinnati Professor of Chemical Engineering Anastasios Angelopoulos is studying potential defenses for these chemical agents. One solution lies in the very fabric of soldiers’ uniforms.

The National Science Foundation recently awarded Angelopoulos a $324,551 grant to study the transport behavior of organic molecules, including those similar to chemical warfare agents, in the commercial polymer Nafion.

The research is a collaborative project with University of Florida Professor of Chemical Engineering Sergei Vasenkov and UC professor Jonathan Nickels, who is co-principal investigator on the grant. A key goal of the work is to create a protective membrane that can be woven into soldiers’ uniforms.

“Nafion is a very unique type of polymer,” Angelopoulos says. “It has the very important property of being able to transport ions very rapidly, but at the same time, it hinders the transport of gases, like oxygen. Organic liquids, like chemical warfare agents, have much more complex transport behavior in Nafion that cannot now be predicted.”

The idea is to incorporate the naturally flexible Nafion membrane into a soldier’s clothes to detect chemical agents in the air while preventing them from interacting with the skin.

“The project is geared toward understanding how the complex structure of Nafion can be used to trap and convert chemical warfare agents into benign materials,” Angelopoulos says.

Angelopoulos has an extensive background in fuel cell research and has worked with Nafion for years. Nafion plays an important part in electricity generation using fuel cells.

If hydrogen and oxygen were to mix or electrical current were to flow directly from the anode to the cathode rather than through an external device, the reaction would short-circuit. That’s where Nafion comes in.

Nafion has unique structural properties that provide for electrical insulation and gas separation, while also promoting the passage of ions. This is especially useful in fuel cells, but Angelopoulos was drawn to its broader implications. If Nafion’s structure could be sufficiently understood, he thought, perhaps it could be manipulated to prevent the transport of chemical warfare agents.

Nafion is already known to limit the transport of large organic compounds such as those found in chemical warfare agents. The problem has been Nafion’s effectiveness in the presence of water.

Soldiers sweat. A Nafion membrane woven into the fabrics of a uniform only works if it can be effective when soldiers sweat into it. Water can readily transport through Nafion, which poses a problem if chemical agents also pass through.

“This is a very important question to answer if you want to figure out how to immobilize these chemical warfare agents,” Angelopoulos says. “We can’t answer it right now.”

The purpose of the NSF grant is to address this question and also determine how to convert these same agents into benign forms through chemical reactions. After all, once an agent is trapped within the threads of a soldier’s uniform, he or she won’t want to carry it around all day.

On top of serving as an effective membrane to slow down and trap chemical reagents, Nafion can serve as a catalyst. In previously published work, Angelopoulos used Nafion to detect different organic molecules that we exhale in our breath, which he then used to diagnose disease.

“I’ve been working with Nafion for a number of years,” Angelopoulos says. “It was only when I was working with the chemical compounds in breath that I started to make the connection to chemical agents.”

When a patient exhaled onto a Nafion membrane, a reaction between a chemical pre-immobilized in the membrane and the reagents in the breath occurred, creating organic synthesis products known as Flavans.

In other words, Angelopoulos could determine chemical compounds present in a person’s breath based solely on the color of the reaction. At the same time, the intensity of this color reflected the concentration present.

Angelopoulos realized that Flavans could further react with chemical warfare agents to form benign products when applied to a soldier’s clothing. On top of that, during this process, Flavans changed in color.

“Not only are soldiers protected by chemical warfare agents with this membrane – they’re also aware of the chemical agents present in their environment,” says Angelopoulos. “That’s the beauty of this approach.”

Current defense against chemical agents involve bulky uniforms with limited mobility (imagine something similar to the suit Jeremy Renner’s character wore in the film The Hurt Locker). Nafion, however, is popular in thin membranes and coatings specifically for its durability, thanks to its Teflon-like backbone.

“The goal with Nafion is to have clothing that is flexible that gives the soldier maximum maneuverability,” says Angelopoulos.

To reach this goal, the research team must evaluate these materials and how to blend them into a fiber that can be woven into a suit. A key to this goal lies in the way we understand the chemical warfare agents trapped in the Nafion membrane – What causes these agents to be trapped in the membrane? How much agent can accumulate in the suit before saturation? How does one even wash this suit? With the high price of Nafion, answering these questions first is necessary for a commercial scale-up.

“Once we obtain fundamental understanding of how these organic materials imbibe into Nafion, we can start making some practical materials,” says Angelopoulos, who is already working on a future proposal on this aspect.

The end result will eventually be a super suit of sorts: a color-changing, chemical-absorbing uniform that contours to each individual soldier.

Angelopoulos has a long history with studying chemical agents, starting with his first job after college at a U.S. Army research lab. There he first understood the importance of detecting and protecting against chemical warfare agents.

Beyond his professional interest in Nafion, Angelopoulos’ work with this material really hits close to home. He has two stepsons serving in the U.S. Army.

Angelopoulos says this work with Nafion sprang from a combination of factors: his background with the Army, his work in fuel cell research and now this strong personal investment because of his family.

“I think it was just synergy, a matter of connecting all these dots,” Angelopoulos says. “I wondered what would happen if I took chemical agents to drive reactions in a Nafion membrane. And it works beautifully.”

Angelopoulos and the research team still have plenty of questions to answer, and the funding from NSF will allow them to explore the vast implications for this technology. When all is said and done, the team hopes to offer several more practical uses for the unique polymer Nafion, while serving a greater national good.

“We all have to participate in ensuring the health and wellbeing of the soldiers who are fighting for us,” says Angelopoulos. “The most important aspect is using this work to help protect the individuals who are fighting to maintain our freedoms.”

How skin cells protect themselves against stress

How returning to a prior context briefly heightens memory recall

Scienmag Oct 31, 2019
Credit: Johns Hopkins Medicine In a bid to determine factors linked to the most debilitating forms of…