Colonization of the Antilles by South American fauna: Giant sunken islands as a passageway 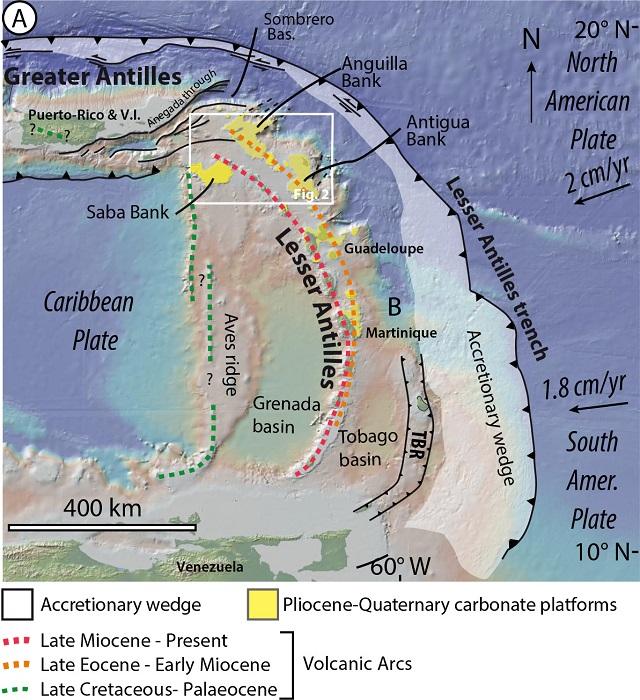 Fossils of land animals from South America have been found in the Antilles, but how did these animals get there? According to scientists from the CNRS, l’Université des Antilles, l’Université de Montpellier and d’Université Côte d’Azur, land emerged in this region and then disappeared beneath the waves for millions of years, explaining how some species were able to migrate to the Antilles. This study will be published in June 2021 issue in Earth-Science Reviews.

Fossils of land animals from the Antilles, including mammals and amphibians, have their closest relatives in South America. The crossing of the Caribbean Sea from South America was therefore possible, but how?

As swimming across the continent must be ruled out, given that several hundred kilometres separate the South American continent from the Antilles, the dispersal of this fauna has been attributed either to natural rafts coming out of the continent’s flooded rivers, or to the existence of land bridges that are now submerged.

A scientific project involving geologists, palaeontologists and geophysicists1 is now solving some of the mysteries related to these terrestrial species in the Antilles. The researchers have reconstructed the geography of the northern Lesser Antilles over the last 40 million years and have shown that the movements of the tectonic plates at the junction between the Lesser Antilles, the Greater Antilles and the Aves Ridge (an underwater mountain), have several times given birth to archipelagos and islands quite close to each other, which were then swallowed up in the course of time.

In addition to tectonic movements, the glacial-interglacial cycles for 1.5 million years (Quaternary) have favoured the appearance and disappearance of archipelagos. Indeed, during these cycles, the sea level decreases or increases according to the storage of water in the ice caps or their melting (the duration of these cycles is about 100,000 years). The formation of these archipelagos could thus have favoured terrestrial connections between the Aves Ridge, the Greater Antilles and the Lesser Antilles.

Scientists will now extend their studies southward, between Guadeloupe and South America, to reconstruct the past geography of the entire Caribbean Plate, in order to define more precisely the nature of the terrestrial species’ dispersal paths between the Americas.