Collecting the right quantity of evidence: How the brain makes a difficult decision 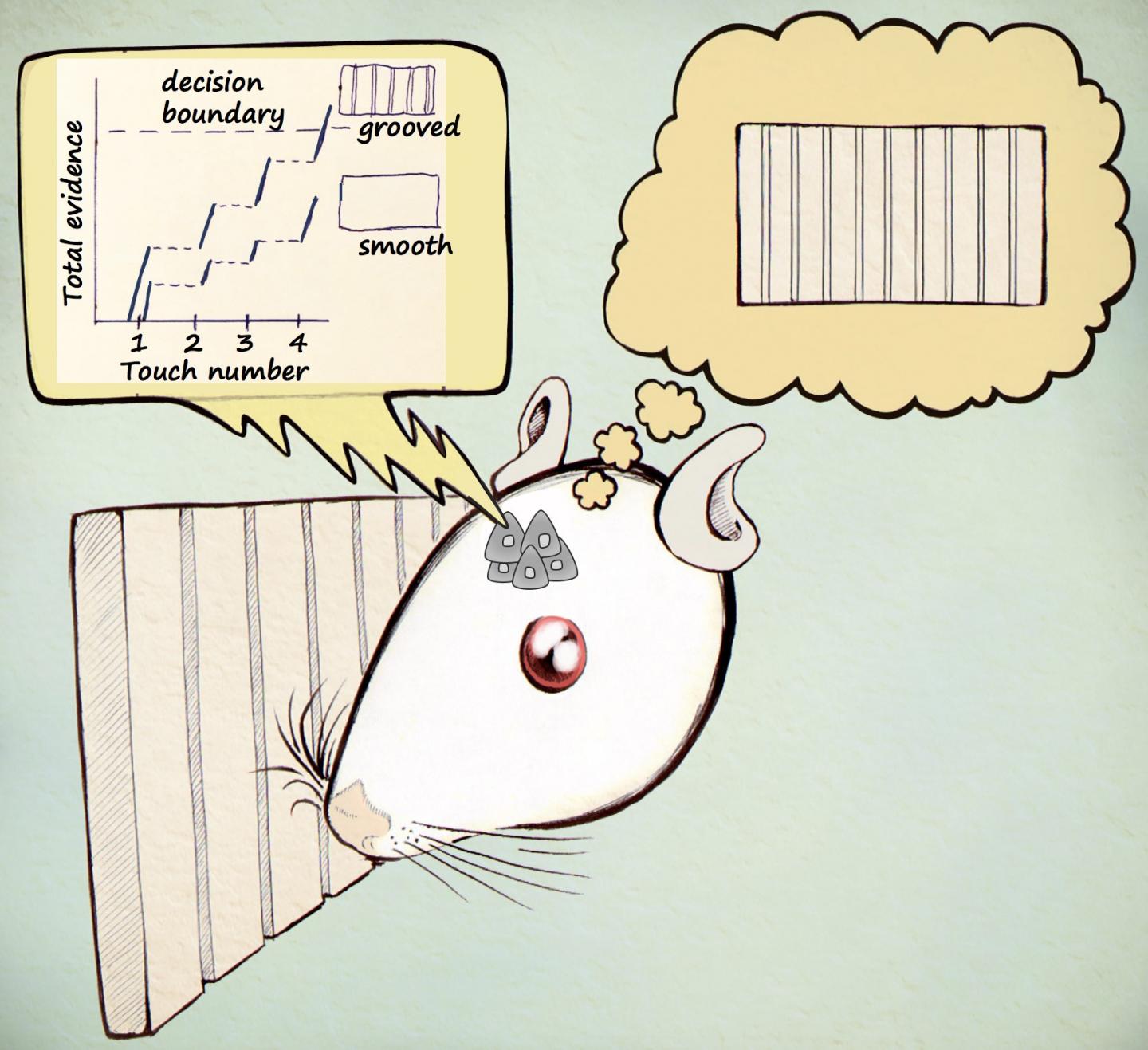 New research conducted in the Cognitive Neuroscience group of SISSA shows that a perceptual decision – recognizing an object and taking the appropriate action – is triggered as soon as the brain’s processing networks accumulate the exact right quantity of sensory information. Our sensory receptors continuously collect information from the outside world, allowing us to understand what surrounds us and to behave accordingly. Recognizing the identity of an object often seems almost instantaneous. However, sometimes information enters the sensory system more gradually, in fits and starts, and an immediate percept is not possible. How, then, are signals accumulated over time? When does the nervous system decide that “enough is enough: it’s time to act”? Two new publications in Current Biology by Yanfang Zuo and Mathew E. Diamond (director of SISSA’s Tactile Perception and Learning Lab) show that the brain compares the incoming sensory evidence in favor of competing percepts and expresses a decision as soon as the total acquired evidence for one choice reaches a fixed boundary. The studies uncover fundamental brain mechanisms underlying decision making in an uncertain world.

Reaching a boundary in visual perception

To date, how the brain commits to a decision under conditions of gradual, uncertain sensory inflow has been studied almost exclusively by having a subject (a human or monkey) view a computer monitor displaying many dots moving in different directions. The subject is tasked with judging the overall direction of the majority of the dots (this is akin to watching the main hall of Grand Central Station from a balcony at rush hour to assess whether more people are entering or exiting). If 100% of the dots on the monitor are moving to the left, the percept forms immediately and the decision is fast and easy. But if 55% of dots are moving to the left and 45% are moving to the right, motion signals must be collected over time. Decades of neuroscience research have shown that the incoming signals in favor of the two possible choices (left versus right) are in competition: the viewer can report a motion percept as soon as the total amount of visual motion information in favor of one of the two alternatives, integrated over time, reaches some fixed quantity. The model formulated to explain these results, “bounded integration,” is simple, efficient, and computationally optimal; there even exist robust neuronal correlates. But does the model generalize beyond visual motion perception?

“Sensory-perceptual decision making is a pervasive element of behavior, carried out countless times each day. We wanted to see whether the “bounded integration” model for explaining visual motion perception can explain perceptual judgments in a different sensory modality, in a different species, and in a different form of sensing” explains Mathew Diamond, the senior author of both articles.

While primates are experts in vision, rats are experts in touch, especially when it comes to using the whiskers of their snout to identify the texture of an object. The perception of surface texture is critical to rats’ behavior, for example in the selection of nesting site and materials. Rats move their whiskers in a forwards/backwards cycle at 10 Hz, sweeping them across the surface on each cycle. Thus, rather than receiving sensory evidence (as in vision), the rat creates sensory evidence by actively controlling its own whisker motion. In the new published work, the investigators presented one of three possible textures before the rat on each trial. According to which texture it sensed through its whiskers, the rat selected a reward location, with the correct location set according to actual texture identity. Meanwhile, the investigators took video records at 1,000 images per second to examine whisker shape, motion and angle. They also measured neuronal activity in two regions of the cerebral cortex that are dedicated to processing tactile information.

When is enough enough?

On some trials, the rat touched once and quickly made its choice; on other trials, the rat touched as many as six times. If decision making were based on bounded integration, then the rat would end its exploration as soon as it had generated enough evidence to support a reliable choice, and its average accuracy would be independent of the count of touches. An alternative hypothesis proposes that a pattern generator in the rat’s motor system pre-sets the upcoming trial’s touch count even before the rat makes contact. The results turned out to be consistent with the bounded integration framework – accuracy was unrelated to the number of touches.

The main conclusions of the two studies are illustrated in this cartoon, where the rat must identify the texture as grooved or smooth. The first Current Biology study identified the nature of the tactile evidence: whisker kinematics (bending and motion) differ according to the contacted texture. Once kinematic features are converted to neuronal firing, the brain begins to process texture information, as shown on the left. While the information acquired in a single touch indicates one texture more strongly than the other, the signal is graded: whisker kinematics are consistent with the grooved texture to some degree, but also with the smooth texture to some degree. Thus, there are different quantities of evidence in favor of both textures, shown as the upward steps in the plot. The main finding is that the rat makes its choice when the total quantity of evidence for one texture, summated across touches, reaches a boundary. Here, the total evidence in favor of the grooved texture reaches the boundary on the 4th touch, while the total evidence in favor of the smooth texture remains below. As shown on the right, once the evidence for the grooved texture reaches the boundary, the rat forms a percept – a mental image of the object – and makes the correct choice. Had the evidence for the smooth texture reached the boundary first, the rat would have made an incorrect choice based on an erroneous percept. That is exactly what happened on 20% of trials.

Where is the information accumulated? The second Current Biology study shows that the somatosensory cortex encodes the whisker kinematics of individual touches, but does not accumulate information over the sequence of touches. Instead, somatosensory cortex distributes packets of evidence to a downstream brain region that integrates information across time (depicted here as the neuronal cluster in the rat’s head). On every trial, the rat stops whisking and makes its decision as soon as the summated quantity of touch-by-touch evidence reaches a boundary.

“The framework of decision making through bounded integration, previously attributed to primates, thus extends to rodents,” comments Diamond. A final observation concerns individual differences. “We tend to think that individual humans are different, but all rats must be alike. We were able to compute each rat’s decision boundary. Those with a higher boundary lost more time collecting evidence on each trial, but had better overall performance because they needed more certainty before committing to a decision; they traded speed for accuracy.” That is, rats are aware of how much they know, and decide when they have enough knowledge, a fundamental element of cognition. Current work is exploring other forms of tactile cognition.

Yanfang Zuo was a postdoctoral fellow at SISSA and is now at the Institute of Neuroscience of the Chinese Academy of Sciences in Shanghai.

An ion channel with a doorkeeper: The pH of calcium ions controls ion channel…

Scienmag Jun 25, 2019
Biochemists identified the structure of a ring located at the opening of the TRPML2 ion channel that can be blocked…

The world is getting wetter, yet water may become less available for…