Many of the drugs we utilize in modern medicine are naturally produced by microbes. Penicillin, an antibiotic derived from certain molds, is one of the most notable natural products due to its recognition as one of the biggest advances in medicine and human health. As DNA sequencing has become cheaper and faster, scientists now have access to hundreds of thousands of microbial genomes and the natural products they produce. However, Doug Mitchell (MMG), the John and Margaret Witt Professor of Chemistry at University of Illinois, says this pales in comparison to the number of compounds these organisms have the capacity to make using the genetic pathways they possess. 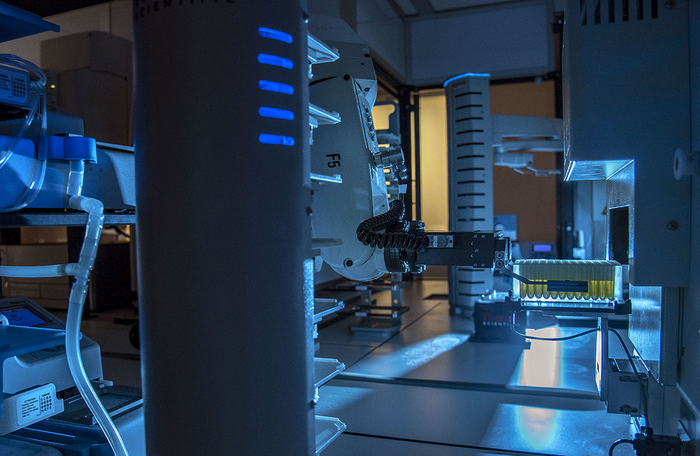 Many of the drugs we utilize in modern medicine are naturally produced by microbes. Penicillin, an antibiotic derived from certain molds, is one of the most notable natural products due to its recognition as one of the biggest advances in medicine and human health. As DNA sequencing has become cheaper and faster, scientists now have access to hundreds of thousands of microbial genomes and the natural products they produce. However, Doug Mitchell (MMG), the John and Margaret Witt Professor of Chemistry at University of Illinois, says this pales in comparison to the number of compounds these organisms have the capacity to make using the genetic pathways they possess.

“This is just the tip of the iceberg,” said Mitchell. “There’s a disparity in what we know today in terms of known molecules versus what nature has the capacity to produce. Like 100 to one at least.”

One group of natural products that has become a popular source of antibiotics are called ribosomally synthesized and post-translationally modified peptides, or simply, “RiPPs.” Traditional methods for accessing RiPPs are slow, and involve taking genes one by one and putting them into a model organism, like E. coli, to see what compound it produces. However, in a new paper resulting from a massive collaborative effort at the Carl R. Woese Institute for Genomic Biology, researchers were able to discover and characterize new RiPPs at an unprecedented speed and scale using the Illinois Biological Foundry for Advanced Biomanufacturing. iBioFAB is a laboratory automation system which can evaluate and assemble multiple synthetic gene pathways from hundreds of genes at once, something that would traditionally take many researchers and much more time to accomplish. This project features a collaboration between Mitchell’s lab, the lab of Huimin Zhao (BSD/GSE leader/CABBI/CGD/MMG), the Steven L. Miller Chair of chemical and biomolecular engineering, and the lab of Wilfred van der Donk (MMG), Richard E. Heckert Endowed Chair in Chemistry and Howard Hughes Medical Institute Investigator.

The three co-first authors, Alex Battiste, fourth year PhD student in the Mitchell lab, Chengyou Shi, fifth year PhD candidate in the Zhao lab, and Richard Ayikpoe, a postdoc in the van der Donk lab, described how they each led a part of the project in their respective labs. Shi’s team ordered synthetic genes and then assembled them into candidate pathways, or gene clusters, using iBioFAB integrated with a genome mining program called RODEO. Then, different classes of the gene clusters were given to Battiste and Ayikpoe’s teams to test which pathways were functional and likely to produce new RiPPs in E. coli. Any structures of RiPPs that showed antibiotic activities were characterized in detail by Ayikpoe’s team. The high-throughput technology allowed for 96 pathways comprised of about 400 genes to be tested at once, with the production of 30 new compounds.

“Compared with traditional RiPP discovery methods, our platform is scalable and high-throughput in many aspects, from the biosynthetic gene cluster identification, the cloning, the production, and detection and characterization,” said Shi. “This, I would say, is the first such platform for large scale RiPP discovery.”

Out of the new compounds discovered, three were found to have antibacterial properties. When tested against Klebsiella pneumoniae, which are highly virulent antibiotic-resistant bacteria, the newly discovered antibacterial RiPPs were found to be effective at killing the dangerous bacteria. The researchers say this could be a new avenue for discovering compounds that are effective against bacteria that are resistant to current antibiotic drugs.

“We found three RiPPs that have antimicrobial properties against pathogens that are known to be involved in hospital acquired infections, including Klebsiella,” said Ayikpoe. “This research shows that by using this platform to extend the number of biosynthetic gene clusters that we can screen at once, we are more likely to discover anti-microbial compounds that could have therapeutic properties.”

The team says the goal of the paper is two-fold: to demonstrate the ability of the high-throughput technology to quickly construct and test gene clusters for new RiPPs, but also to emphasize the kind of large-scale collaborative projects that are made possible within the IGB. “There’s no way that any one of our labs could have done all of this on their own. The IGB has provided the crucible for this kind of interdisciplinary research,” Mitchell said.

Battiste described how the IGB inspires collaborative projects like this one naturally through its design. “The IGB makes it very easy to just talk to people when you see them all the time in your theme, which lowers the barrier for starting projects with them,” Battiste said. “Everyone in the MMG theme works on similar stuff even if we’re from different labs. So we all have different types of expertise but they mesh well together, and you get to learn about the types of techniques they’re using. It’s been one of my favorite parts of working here, the sense of camaraderie amongst all of the people on the team.”

To highlight the spirit of collaboration embodied by their paper, the labs are working with the Department of Chemistry to create a video to showcase both their research and all that the IGB offers to empower projects like these, and to hopefully inspire more of them. The video is set to release soon to accompany the publication of the paper in Nature Communications.

All three co-first authors described how their education, research, and job prospects have benefitted greatly from their time at the IGB, highlighting that it is both the people and the technology together that make IGB a great place to conduct research. “The collaborative atmosphere that the IGB offers in diversity and growth, both in terms of science and social life, is really remarkable.” said Ayikpoe.

This research was supported by funding from NIH.

A scalable platform to discover antimicrobials of ribosomal origin