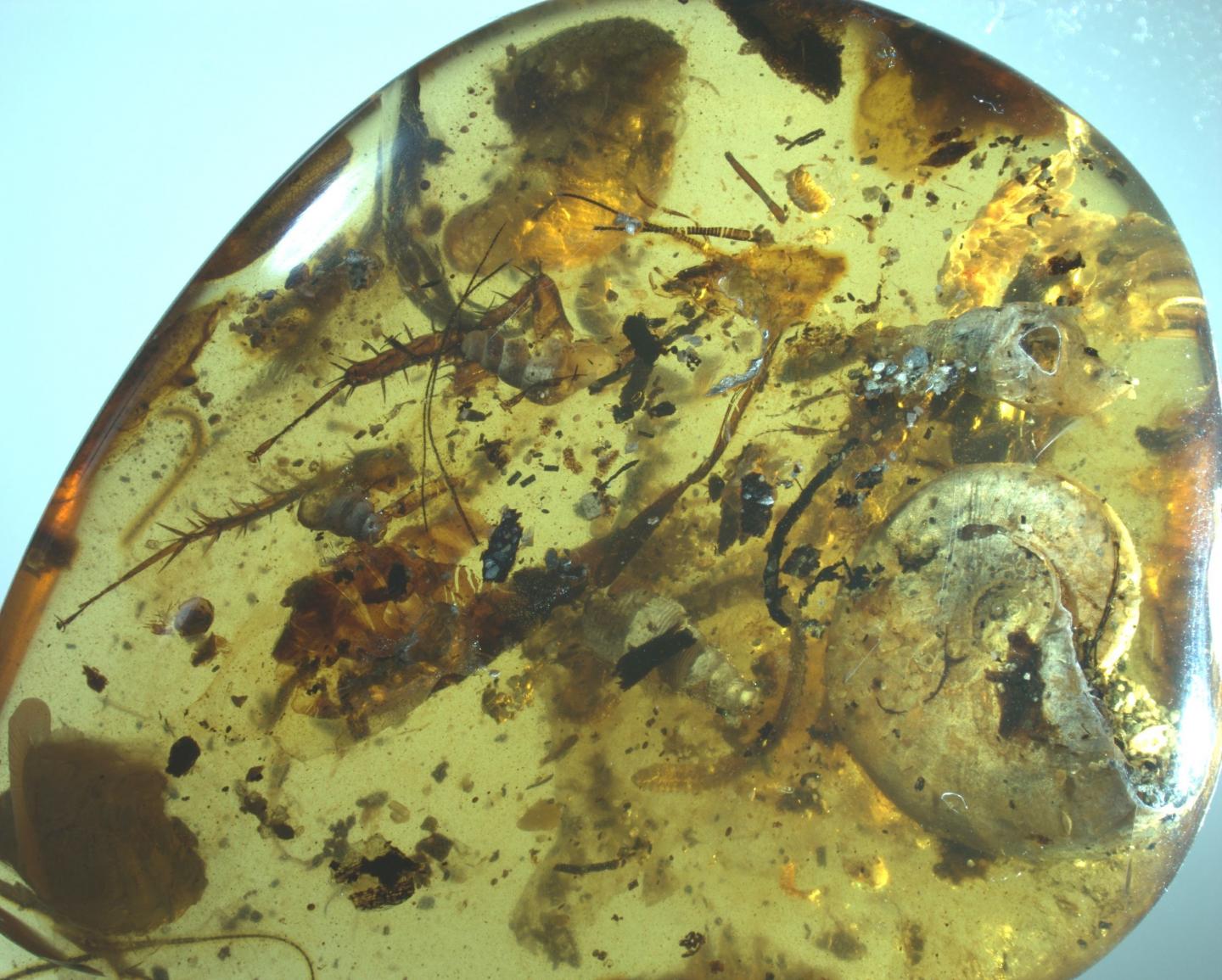 Most amber inclusions are organisms that lived in the forest. It is very rare to find sea life trapped in amber. However, an international research group led by Prof. WANG Bo from the Nanjing Institute of Geology and Palaeontology of the Chinese Academy of Sciences (NIGPAS) reported the first known ammonite trapped in amber in a study in PNAS published on May 13.

The ammonite, a kind of sea animal, was trapped in 99-million-year-old amber from northern Myanmar. The amber is 33 mm long, 9.5 mm wide, 29 mm high and weighs 6.08 g. Besides the ammonite, the amber also encases a diverse assemblage of organisms that today live on land or in the sea, including at least 40 individual animals.

Of the terrestrial fauna found in the amber, mites are the most abundant. Also present are spiders, millipedes, cockroaches, beetles, flies and wasps, most of which would have lived on the forest floor.

Of the marine fauna, in addition to the ammonite itself, sea snails and sea slaters are present. The slaters are like those living on the seashore today.

The researchers used X-ray micro-computed tomography (micro-CT) to obtain high-resolution three-dimensional images of the ammonite including its convoluted sutures, which are important for identifying ammonites.

They found that the ammonite is a juvenile Puzosia (Bhimaites) and its presence in the amber supports a late Albian-early Cenomanian age for the amber deposit. This discovery represents a rare example of dating using amber inclusions.

But how on earth did the ammonite, an extinct sea-dwelling relative of squid, get preserved in a piece of amber that also contains land-based animals? The ammonite and sea snail shells offer possible clues.

The shells are all empty with no soft-tissue, so the organisms were long dead by the time they were engulfed by resin. The outer shell of the ammonite is broken away and the entrance of the shell is full of sand. The amber also contains additional sand.

The most likely explanation for the appearance of both marine and terrestrial organisms within the amber is that a sandy beach covered with shells was located close to resin-producing trees. The flying insects were trapped in the resin while it was still on the tree. As the resin flowed down the tree trunk, it trapped organisms that lived near the foot of the tree. Reaching the beach, it entombed shells and trapped the slaters living there.

Echo chambers may not be as dangerous as you think, new study finds

Scienmag Feb 1, 2019
Researchers from the University of Malaga (UMA) evidence that levels of this vitamin in the body decrease in those…