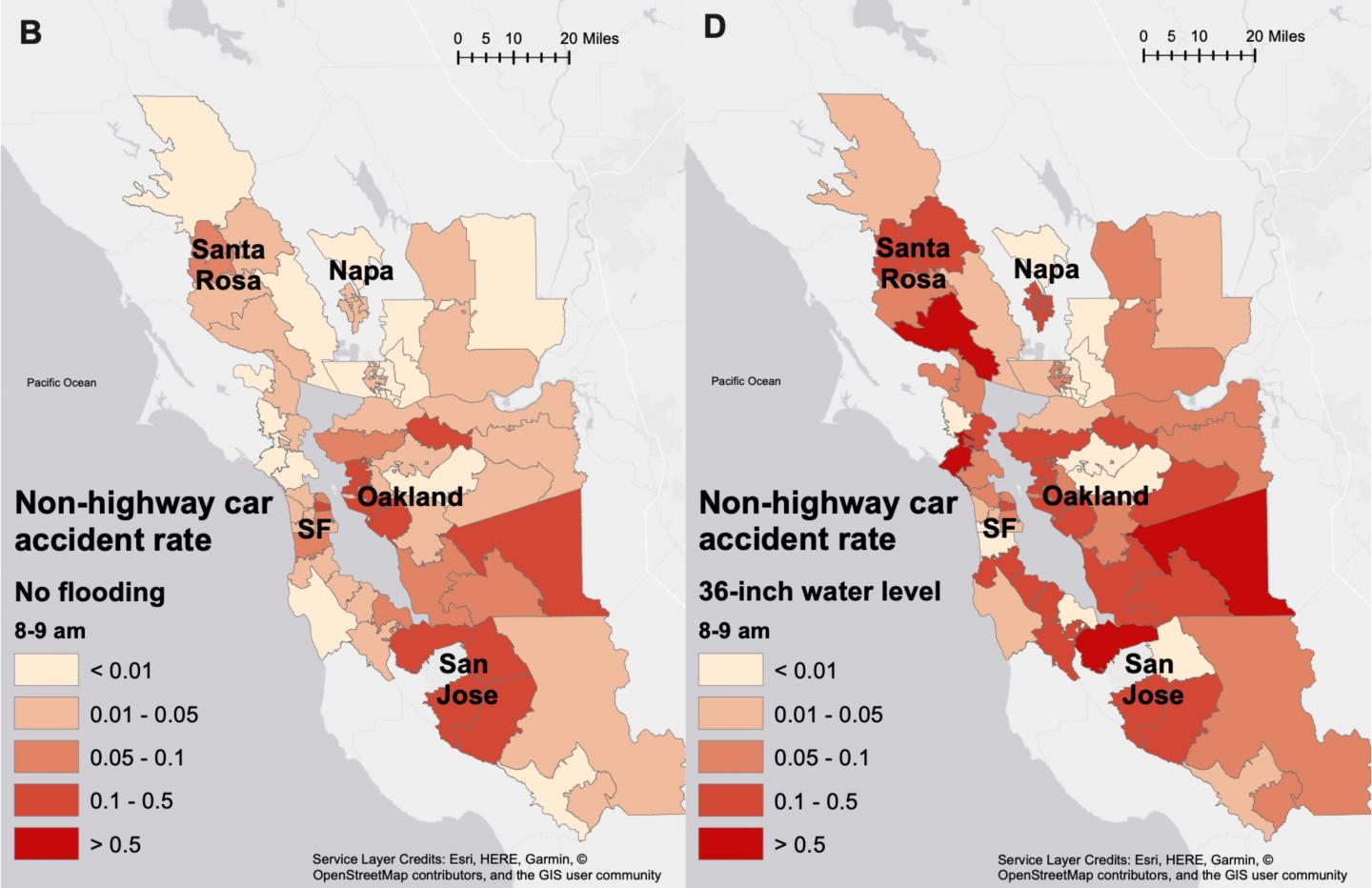 Almost half of the world’s population currently lives in cities and that number is projected to rise significantly in the near future. This rapid urbanization is contributing to increased flood risk due to the growing concentration of people and resources in cities and the clustering of cities along coastlines.

These urban shifts also result in more complex and interconnected systems on which people depend, such as transportation networks. Disruptions to urban traffic networks from flooding or other natural disasters can have serious socioeconomic consequences. In fact, what are defined as indirect impacts from these types of events, such as commute-related employee absences, travel time delays and increase in vehicular accident rates, could ultimately outweigh the more direct physical damage to roads and infrastructure caused by severe flooding.

Stanford researchers examined traffic networks in the San Francisco Bay Area (SF Bay Area) as a case study to quantify the indirect impacts of sea-level rise and intensifying coastal flood events on urban systems. Specifically, the researchers sought to identify the effects flooding would have on traffic delays and safety, particularly as road closures rerouted vehicles into adjacent streets and residential neighborhoods not designed to handle heavy vehicle flows. The research was published in the May issue of Urban Climate.

Similar to many other regions across the country, the SF Bay Area has dense urban development concentrated along its coastline and heavily congested traffic grids. Currently, even relatively minor instances of coastal flooding have the potential to inundate major traffic corridors and increase already lengthy commute times and traffic accidents.

“I think one of the key issues about traffic in the Bay is that we’re already pretty close to the limit,” said senior study author Jenny Suckale, an assistant professor of geophysics at Stanford University’s School of Earth, Energy & Environmental Sciences (Stanford Earth). “That’s also why some of the relatively minor degrees of water level we’re considering here can make quite a difference.”

For coastal flooding events, three types of flood impacts were identified: impassable commutes where the origin, destination or critical road connections are flooded and impede driving; travel time delays caused by commuters rerouting to avoid flooded roadways; and increases in car and pedestrian accident rates in communities that experience high inflows of traffic as commuters reroute onto local roads.

The study highlights the challenges of preparing the traffic network in the Bay Area for climate change. Increasing coastal flooding could lead to significant travel time delays across the entire Bay Area, including communities that do not encounter any flooding themselves. However, focusing exclusively on reducing travel time delays may be problematic as some communities will be impacted by coastal flooding primarily through an increase in accident rates.

The research is a followup to the team’s recent findings published in Science Advances that revealed commuters living outside the areas of flooding may experience some of the largest commute delays in the Bay Area due to the nature of road networks in the region.

“The two studies provide interesting contrasts on the resilience of communities to flood impacts,” Kasmalkar said.

While delays increase sharply at higher water levels, region-wide accident rates increase the most at low water levels, suggesting that accidents may be a greater concern than delays at low-to-moderate water levels. Using only the metric of travel time delay for estimating traffic resilience could impart a bias toward travel efficiency rather than road safety into planning efforts.

When flooding of highways forces commuters onto local roads which pass through residential communities a spike in accident rates occurs. This may especially impact lower income or historically disadvantaged communities that are more likely to be adjacent to highways and may have fewer road-safety provisions.

“Some communities might care a lot more about safety than traffic delays,” Suckale said. “The interconnectedness makes governance and decision making harder, and planners are not necessarily accounting for the negative consequences on neighbors.”

Suckale is also a fellow, by courtesy, of the Stanford Woods Institute for the Environment, an assistant professor, by courtesy, in Civil and Environmental Engineering and a member of ICME.

The research was supported by the UPS Endowment Fund for Transportation, Logistics, and Urban Issues, Stanford’s Bill Lane Center for the American West, the NSF through the Office of Polar Programs and Stanford University. The work is the product of the Stanford Future Bay Initiative, a research-education-practice partnership committed to co-production of actionable intelligence with San Francisco Bay Area communities, to shape a more equitable, resilient, and sustainable urban future.