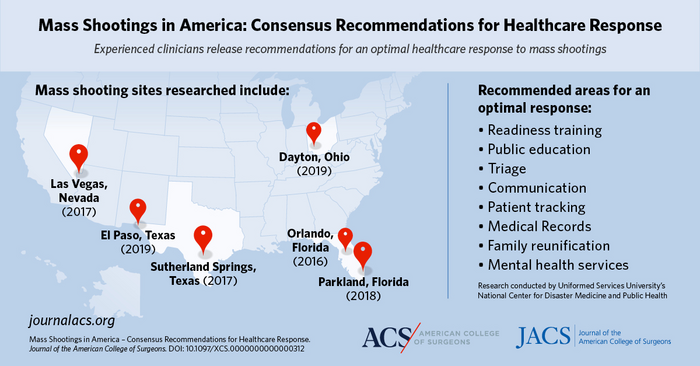 CHICAGO: The number of mass shooting incidents (MSI) has been increasing in recent years,1,2 rising nearly 40 percent from 2019 to 2021.3 Although research has been done to identify ways to prevent mass shootings and reduce death and injury, there have not been specific details about the medical system response to such events, according to study authors who recently published their findings as an “article in press” in the Journal of the American College of Surgeons.

Uniformed Services University’s National Center for Disaster Medicine and Public Health hosted a consensus conference in September 2021 to bring together clinicians from six sites where mass shootings occurred and more than 15 people were killed or injured. These locations were in Orlando, Fla. (2016); Las Vegas, Nev. (2017); Sutherland Springs, Texas (2017); Parkland, Fla. (2018); El Paso, Texas (2019); and Dayton, Ohio (2019). The recommendations from the conference will help healthcare facilities better respond when a mass shooting occurs nearby.

“We recognized that mass shootings are frequent events that occur in the United States and wondered if we could learn more about how to optimize response to these incidents,” said lead study author Craig Goolsby, MD, MEd, FACEP, a professor and the vice chair of USU’s Department of Military and Emergency Medicine, and the science director of the National Center for Disaster Medicine and Public Health. “We identified a group of recent mass shootings and then invited clinicians who participated in the healthcare response—EMS clinicians, emergency physicians, and surgeons—to participate in our conference.”

The final day of the conference consisted of breaking into subgroups based on expertise (EMS, emergency medicine, and surgery). Each subgroup was asked to create specific recommendations for each of the themes identified by the study team, and to generate any additional themes that the subgroups thought were missing. The emergency medicine and surgery groups did not add any other themes, and the EMS group added unified command, scene management, and EMS to hospital assistance.

After the conference, two of the study authors reviewed each group’s consensus statements to identify common themes. Through this review, the authors identified eight recommendations that were similar across all three groups:

Dr. Goolsby noted that many of these recommendations can be implemented fairly easily. A recommendation he thought was particularly important was a modified triage plan for mass shooting patients.

“The participants identified that for shootings, looking at anatomic considerations—where the bullet holes are on a patient—is really important in getting them to the right care as quickly as possible,” said Dr. Goolsby. “That could be a pretty easy recommendation for hospitals to implement.”

Getting patients the right care after a mass shooting

These recommendations can help any healthcare facility better respond if a mass shooting occurs nearby. However, preparing for a mass shooting and addressing firearm violence that happens on a daily basis require different plans to best care for patients. Study coauthor Deborah A. Kuhls, MD, FACS, FCCM, assistant dean for research and professor of surgery, Kirk Kerkorian School of Medicine, University of Nevada, Las Vegas, who was part of the response to the 2017 mass shooting in Las Vegas, said that while mass shootings make up a small percentage of the deaths occurring each year from firearms in the United States, they are horrific events. The more common causes of death and injury from firearms are individual homicides and suicides. But when a mass shooting occurs, it requires a different healthcare response to effectively care for the patients.

“What is really different is that with one gunshot wound patient coming in, I focus my attention on that patient. In a mass casualty event, there is a large number of people who appear at once and we have to decide who needs our attention the most, who has the greatest threat to life,” said Dr. Kuhls.

Importance of STOP THE BLEED®

The focus of the conference and recommendations was how healthcare clinicians and organizations, from point of injury to the hospital, can best respond once victims are injured in a mass shooting. Dr. Goolsby and Dr. Kuhls stressed the importance of prehospital care, such as training the pubic in bleeding control techniques through the STOP THE BLEED® program. Bleeding control training for the public came up during the conference as a way for the public to help save lives in a mass shooting situation.

“A number of participants in the conference talked about how patients arrived with tourniquets in place that they thought were probably lifesaving,” Dr. Goolsby said.

“While mass shooting incidents are a shockingly common occurrence nationally, they are still unlikely to affect a given community on any particular day. Information from this conference may help prehospital and health systems fill a preparedness gap for the unique challenges of a mass shooting,” the study authors wrote.

The inaugural episode of the Journal of the American College of Surgeons podcast, The Operative Word, features Dr. Goolsby discussing this research. The episode is available online now.

Journal of the American College of Surgeons