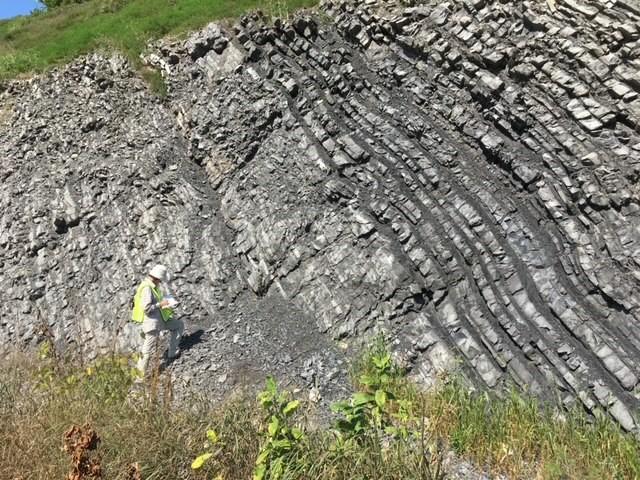 Earth’s climate was relatively stable for a long period of time. For three billion years, temperatures were mostly warm and carbon dioxide levels high – until a shift occurred about 400 million years ago. A new study suggests that the change at this time was accompanied by a fundamental alteration to the carbon-silicon cycle. “This transformation of what was a consistent status quo in the Precambrian era into the more unstable climate we see today was likely due to the emergence and spread of new life forms,” said Professor Philip Pogge von Strandmann, a geoscientist at Johannes Gutenberg University Mainz (JGU). Together with researchers from Yale University, notably Boriana Kalderon-Asael and Professor Noah Planavsky, he has traced the long-term evolution of the carbon-silicon cycle with the help of lithium isotopes in marine sediments. This cycle is regarded as a key mechanism controlling the Earth’s climate, as it regulates carbon dioxide levels and, with it, temperature. The researchers’ findings have been published recently in Nature.

The carbon-silicon cycle is the key regulator of climate

The carbon-silicon cycle has kept Earth’s climate stable over long periods of time, despite extensive variations in solar luminosity, in atmospheric oxygen concentrations, and the makeup of the Earth’s crust. Such a stable climate created the conditions for long-term colonization of the Earth by life and allowed initially simple and later complex life forms to develop over billions of years. The carbon-silicon cycle contributes to this by regulating the level of carbon dioxide in the atmosphere. Silicate rock is transformed into carbonate rock as a result of weathering and sedimentation, and carbonate rock is transformed back into silicate rock by, among other things, volcanism. When silicate rock is converted to carbonate rock, carbon dioxide is removed from the atmosphere, while the reverse process releases carbon dioxide once again. “We consider this to be the main mechanism by which Earth’s climate is stabilized over the long term,” explained Pogge von Strandmann.

To trace long-term carbon-silicon cycles back in time and gain a better understanding of the precise relationships governing Earth’s climate, the research team studied the ratio of lithium isotopes in marine carbonates. Lithium is present only in silicate rocks and their silicate and carbonate weathering products. The research team analyzed more than 600 samples deposited as sediments in shallow primeval marine waters and obtained from more than 100 different rock strata from around the world, including from Canada, Africa and China. “We used these samples to create a new database covering the past three billion years,” Pogge von Strandmann pointed out.

These data show that the ratio of lithium-7 to lithium-6 isotopes in the oceans was low from three billion years ago to 400 million years ago, and then suddenly increased. It was precisely at this time that land plants evolved, while simultaneously marine animals with skeletons composed of silicon, such as sponges and radiolarians, spread throughout the oceans. “Both played a role, but as yet we do not know exactly how the processes are coupled,” Professor Philip Pogge von Strandmann added.

Research findings suggest that there was a massive change to the extent of the formation of clay, a secondary silicate rock composed of very fine particles, in the Earth’s past – possibly due to an increase in clay formation on land and a decrease in the oceans. Clay formation is a crucial component of the carbon-silicon cycle and it influences the ratio of lithium isotopes. On land it is caused by the extensive weathering of silicate rocks, but in the oceans a range of different processes is involved. Increased continental clay formation is thought to have lowered carbon dioxide levels in the atmosphere. In contrast, oceanic clay formation, known as “reverse weathering”, releases CO2, so its decline will similarly have lowered atmospheric carbon dioxide levels.

According to the authors of the Nature paper, this suggests that the mode of climate regulation on Earth as well as the primary location where that process occurs has changed dramatically through time: “The shift from a Precambrian Earth state to the modern state can probably be attributed to major biological innovations – the radiation of sponges, radiolarians, diatoms and land plants.” The result of this modification of climate regulation has been apparent ever since in the form of the frequent alternation between cold glacial periods on the one hand and warmer periods on the other. However, this climate instability, in turn, helps to accelerate evolution.