Climate crisis and anthropic pressure are destabilizing the Pantanal

The Pantanal represents 1.8% of Brazil’s total area, occupying 150,000 square kilometers in Mato Grosso and Mato Grosso do Sul states. With a mixture of floodable and non-floodable savannas, meadows, pastures and forests, the macro-region contains the world’s largest floodplain. Together with the Chaco region, which lies further south, the Pantanal is a complex of wetlands with ample biodiversity that provides cultural and ecosystem services to Brazil, Bolivia and Paraguay. 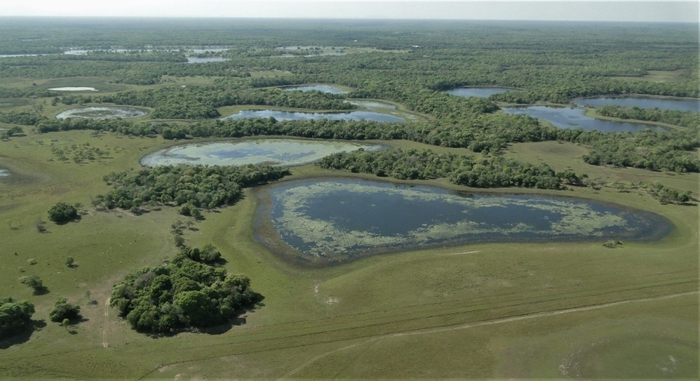 The Pantanal represents 1.8% of Brazil’s total area, occupying 150,000 square kilometers in Mato Grosso and Mato Grosso do Sul states. With a mixture of floodable and non-floodable savannas, meadows, pastures and forests, the macro-region contains the world’s largest floodplain. Together with the Chaco region, which lies further south, the Pantanal is a complex of wetlands with ample biodiversity that provides cultural and ecosystem services to Brazil, Bolivia and Paraguay.

As in the Amazon Rainforest and the Cerrado, agriculture and cattle raising are increasingly encroaching, and in recent years the Pantanal has seen an unprecedented number of fires, mostly set deliberately to clear areas for crops and pasture (read more at: revistapesquisa.fapesp.br/en/the-pantanal-pleads-for-rain/).

A new study aimed at encompassing the complexity of the natural processes that occur in the Pantanal and have become even more complex owing to the global climate crisis and anthropic activity is reported in an article published in the Journal of South American Earth Sciences. Its authors Ivan Bergier and Mario Luis Assine are veterans of scientific investigation in the region.

Bergier is a researcher with EMBRAPA Pantanal – one of the decentralized units of the Brazilian Agricultural Research Corporation (EMBRAPA) – in Corumbá, Mato Grosso do Sul, and has studied the region for 15 years. Assine is a professor at São Paulo State University (UNESP) in Rio Claro, where he has worked for over 30 years.

“In this new study, we divided the Pantanal into sections, which we call functional landforms, to show how these areas behave differently in terms of hydrology – some areas dry up more quickly, some only receive water in the form of rain, some contain rivers as well as floods caused by rain – and how this natural and recurring process is being intensified by global warming and human activity, both in the vicinity and in the Pantanal itself,” Assine told Agência FAPESP.

According to the article, summer rainfall and the number of dry days in autumn and winter have consistently increased, pointing to the likelihood of increased fluvial discharge and sediment load in the rainy season, and water deficits in the dry season.

“Such a scenario indicates extreme dry cycles over all self-affine functional landforms, particularly in abandoned lobes relying exclusively on rainwater, whereas extremes of rainfall intensity at headwaters may amplify the risks of large-scale avulsions at active lobes of the fluvial mega-fans,” the authors write in the Abstract.

To help readers with the technical terms (“self-affine”, “lobes”, “megafans” and so on), let us briefly describe the geomorphological peculiarities of the Pantanal. The Pantanal is often imagined as a homogeneous structure made up of marshes and swamps (pântanos), but this is mistaken. “The Pantanal is a very large floodable area. It’s actually a series of floodplains. Its geological features make it so. It’s a morphological depression, a sedimentary basin, subject to enormous flooding in some years, with less in other years, largely as a result of variations in rainfall. It isn’t low-lying only because of erosion. It’s also low-lying because of tectonic downwarping, and earthquakes still happen in the area. I call the Pantanal a geological gift,” Assine said.

Its geological history has created a vast tract of extremely flat land, with an average height above sea level of only 100 meters. The floodplains are susceptible to whatever happens nearby, to the east on the Maracaju Plateau, associated with the savanna-type vegetation of the Cerrado, and to the north on the Parecis Plateau, in the transition to the Amazon Rainforest. The rivers that run down from the uplands and bring sediments to the plain are unusual in that they are not confined to valleys but fan out, ramify and distribute their waters via smaller rivers or creeks that form vast descending structures termed “mega-fans” by Bergier and Assine.

“Mega-fans are avulsive river systems that constantly change position. They are what make the Pantanal a mutating landscape and explain its susceptibility to anthropic interference,” Assine said.

In sedimentary geology and fluvial geomorphology, avulsion occurs when a river channel switches location along part of its course. Avulsions are characteristic of fluvial and deltaic environments, including alluvial fans and rivers with multiple channels.

“Mega-fans are self-affine, meaning similar to each other,” Bergier explained. “They’re self-similar forms that are repeated on varying scales. In our study, we set out to understand how these forms originate and are repeated. There are several mega-fans in the area. The largest is the Taquari River mega-fan, which has high fluvial discharge and spreads more sediment over the plain, occupying much of the area. There are smaller rivers with mega-fans, too. One is called the Negro. The Pantanal was formed over millions of years from this competition among rivers, which is linked to the amount of sediment created on the plateaus and responsible for the functionalities seen at present, including active lobes where the river water spreads out and abandoned lobes where water no longer flows.”

A sedimentary or depositional lobe is a formation that builds up as a river empties into other water bodies, forcing the river outwards and away from its original channel.

The Paraguay River is the Pantanal’s backbone, capturing all the water that does not evaporate or infiltrate the subsoil. The southern portion of the Pantanal is lower than the northern part, and the altitude gradient makes the Paraguay flow slowly southward toward the La Plata Basin.

“The water intake from nearby plateaus is huge. Outflow is hindered by three bottlenecks along the Paraguay. The article shows how these bottlenecks limit the flow of water and cause flooding in the southern part of the Pantanal. The flow is so slow that in the area of the Nabileque, in the southern portion, the big floods occur only four to five months after the main rainy season. It’s a unique phenomenon,” Assine said.

All this makes the Pantanal a vast reservoir. At times of heavy rain, the amount of water entering the low-lying part of the system far exceeds the outflow via the rivers, leading to a build-up of water and flooding due to a rise in the water table. In dry period, the water level falls. Another peculiarity of the Pantanal is that it is actually located in a region with an overall water deficit. Evapotranspiration exceeds precipitation, so that water is lost to the atmosphere in dry periods, and lakes and rivers dry up as the water table falls.

This rising and falling, which is complex in itself, is made more complex by the climate crisis, which tends to produce extremes of rainfall and drought, and by human activity, whether it be deforestation of the Cerrado on adjacent plateaus or burning and clearing of land in the Pantanal, placing the entire system under massive pressure.

Bergier and Assine conducted a hydrological analysis to find out how wetter and drier periods in the Pantanal are influenced by variations in precipitation cycles, measured on the basis of the fluvial discharge from the Paraguay River, which captures all the water. They wanted to help forecasters predict which areas will suffer most from climate extremes.

The water table falls fastest in higher areas, which dry out first and are more subject to burning and other adverse events. Active lobes distribute sand across the flat area, but many lobes that were active in the past and have been abandoned by the rivers may also have areas of dry vegetation that can burn.

“The lobes distribute sand and other sediments, which fill the channels until they reach a critical state known to inhabitants of the Pantanal as ‘breaching’,” Bergier said. “The river bursts its banks and floods the surrounding land. Later the channel re-forms. With each multi-year flooding cycle, the rivers are reconstructed, reshaping the landscape. This is why there are areas of vegetation that were once gallery forests but are no longer near a river. We tried to study the Pantanal from this standpoint, focusing on its complexity and critical states that reach a threshold when the system changes suddenly. We wanted to find out how the Pantanal’s landscape resulted from these non-linearities and how it may evolve from now on.”

The Pantanal is widely considered one of Brazil’s six biomes, alongside the Amazon Rainforest, Cerrado, Caatinga (a semi-arid part of the Northeast), Pampa (grasslands in the South) and Atlantic Rainforest. However, the concept of a biome is associated with plant cover. The Pantanal is much more than that. Above all, it is a unique geological entity that divides, creates spaces and changes all the time.

For example, 30 years ago the Taquari ran down to a place called Porto da Manga. Its mouth is now dozens of kilometers farther north. “These changes are natural. In the long run, they are recurrent events, but anthropic interference accelerates all the processes involved, affecting not only the environment but also the economy, including cattle farming, which is the main economic activity in the region. Climate change is another accelerating factor,” Bergier said.

Taking all these aspects into account, the authors conclude by proposing a sustainable governance model for the Pantanal, with six pillars: recognition that self-affine functional landforms are ultimately associated with predominant types of ecosystem services; functional landforms evolve over time, and subtle environmental changes may substantially alter the nature, quality and quantity of the ecosystem services provided; changes are drastic in magnitude whenever fluvial discharge and sediment load equilibrium are far from their critical states; climate change, combined with unsustainable land-use practices, drives the system far from critical states over shorter periods of time and larger spaces; ecohydrology tools and integrated crop-livestock-forest systems can mitigate anthropic impacts on fluvial discharge and sediment load equilibrium, while positively contributing to atmospheric carbon sequestration; and external factors, such as climate change, influence the formation and evolution of the Pantanal’s
large-scale self-affine functional landforms. Other external factors, such as tectonics, may also play a role and deserve to be investigated in future.

The study was supported by FAPESP via the project “Paleohydrological changes, chronology of events and sediment dynamics in the quaternary of the Pantanal Wetland”, for which Assine was principal investigator.

Functional fluvial landforms of the Pantanal: Hydrologic trends and responses to climate changes