New estimates show that if greenhouse gases continue growing at current rates, large regions at risk of being pushed into climate conditions in which no food is grown today 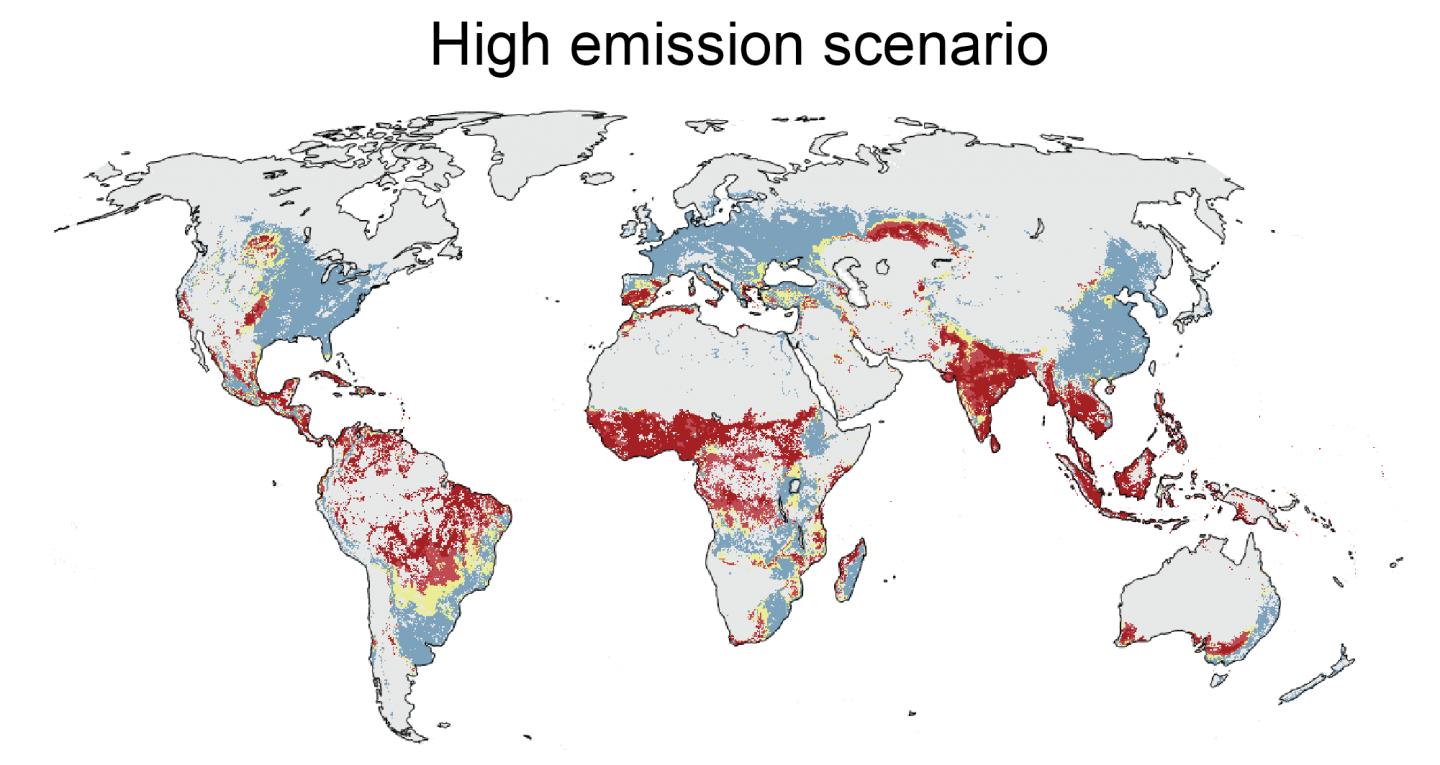 Climate change is known to negatively affect agriculture and livestock, but there has been little scientific knowledge on which regions of the planet would be touched or what the biggest risks may be. New research led by Aalto University assesses just how global food production will be affected if greenhouse gas emissions are left uncut. The study is published in the prestigious journal One Earth on Friday 14 May.

‘Our research shows that rapid, out-of-control growth of greenhouse gas emissions may, by the end of the century, lead to more than a third of current global food production falling into conditions in which no food is produced today – that is, out of safe climatic space,’ explains Matti Kummu, professor of global water and food issues at Aalto University.

According to the study, this scenario is likely to occur if carbon dioxide emissions continue growing at current rates. In the study, the researchers define the concept of safe climatic space as those areas where 95% of crop production currently takes place, thanks to a combination of three climate factors, rainfall, temperature and aridity.

‘The good news is that only a fraction of food production would face as-of-yet unseen conditions if we collectively reduce emissions, so that warming would be limited to 1.5 to 2 degrees Celsius,’ says Kummu.

Changes in rainfall and aridity as well as the warming climate are especially threatening to food production in South and Southeast Asia as well as the Sahel region of Africa. These are also areas that lack the capacity to adapt to changing conditions.

‘Food production as we know it developed under a fairly stable climate, during a period of slow warming that followed the last ice age. The continuous growth of greenhouse gas emissions may create new conditions, and food crop and livestock production just won’t have enough time to adapt,’ says Doctoral Candidate Matias Heino, the other main author of the publication.

Two future scenarios for climate change were used in the study: one in which carbon dioxide emissions are cut radically, limiting global warming to 1.5-2 degrees Celsius, and another in which emissions continue growing unhalted.

The researchers assessed how climate change would affect 27 of the most important food crops and seven different livestock, accounting for societies’ varying capacities to adapt to changes. The results show that threats affect countries and continents in different ways; in 52 of the 177 countries studied, the entire food production would remain in the safe climatic space in the future. These include Finland and most other European countries.

Already vulnerable countries such as Benin, Cambodia, Ghana, Guinea-Bissau, Guyana and Suriname will be hit hard if no changes are made; up to 95 percent of current food production would fall outside of safe climatic space. Alarmingly, these nations also have significantly less capacity to adapt to changes brought on by climate change when compared to rich Western countries. In all, 20% of the world’s crop production and 18% of livestock production under threat are located in countries with low resilience to adapt to changes.

Arctic tundra would be even worse off: it is estimated to disappear completely if climate change is not reined in. At the same time, the tropical dry forest and tropical desert zones are estimated to grow.

‘If we let emissions grow, the increase in desert areas is especially troubling because in these conditions barely anything can grow without irrigation. By the end of this century, we could see more than 4 million square kilometres of new desert around the globe,’ Kummu says.

While the study is the first to take a holistic look at the climatic conditions where food is grown today and how climate change will affect these areas in coming decades, its take-home message is by no means unique: the world needs urgent action.

‘We need to mitigate climate change and, at the same time, boost the resilience of our food systems and societies – we cannot leave the vulnerable behind. Food production must be sustainable,’ says Heino.