A novel genetic analysis performed by researchers at the University of Ottawa has shown melting glaciers increase the risk of viral spillover, suggesting the impact of climate change could lead viruses to infect new hosts in the Arctic. 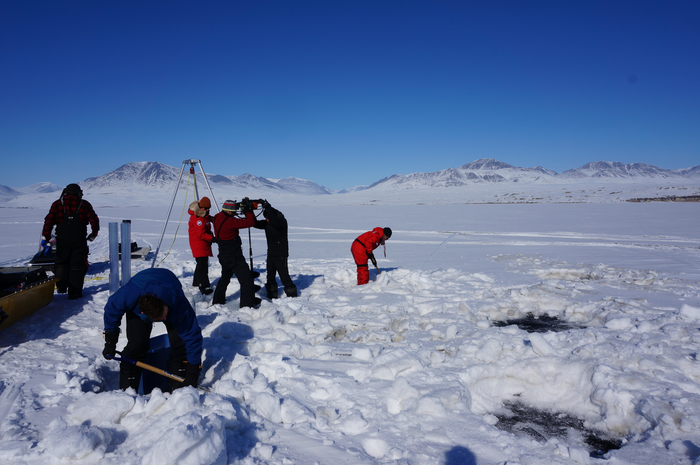 A novel genetic analysis performed by researchers at the University of Ottawa has shown melting glaciers increase the risk of viral spillover, suggesting the impact of climate change could lead viruses to infect new hosts in the Arctic.

Study co-authors Audrée Lemieux and Stéphane Aris-Brosou and their team at the Faculty of Science are the first to assess DNA and RNA sequencing data from this environment using a method developed in comparative biology. The team collected samples from Lake Hazen, the largest freshwater lake and ecosystem in the High Arctic to test how viral spillover risk is affected by glacier runoff. A viral spillover happens when a virus infects a new host for the first time.

“Resorting to a comparative analysis, we show that the risk of viral spillover increases with runoff from glacier melt – a proxy for the effect of climate change,” says Aris-Brosou, an Associate Professor in the Department of Biology. “Should climate change also shift species range of potential viral vectors and reservoirs northwards, the High Arctic could become fertile ground for emerging pandemics.”

Ms. Lemieux  developed an algorithm to determine the risk of viral spillover. Results suggested the risk was greater for lake samples taken from larger waterways, which contain more meltwater from glaciers. As global temperatures rise, glaciers in this area are expected to become larger, generating more meltwater, and hence increasing spillover risk.

“As we show that spillover risk increases in the lake sediments of a High Arctic lake, an environment already warming faster than the rest of the world, we believe that these types of analyses should be pursued with surveillance activities in order to mitigate any potential effects that spillovers could have in the future,” says Lemieux, who was an undergraduate Biology student at the time.

Professor Aris-Brosou says the findings could present a scenario akin to the emergence of Ebola and SARS-CoV-2 where “repeated exposure to new hosts, that lack immunity to these viruses” occurs. The twofold effect of climate change, both increasing spillover risk and leading to a northward shift in species ranges, could have dramatic effect in the area examined.

“As both climate change and pandemics are reshaping the world we live in, understanding how these two processes interact has become critical,” says Aris-Brosou, whose group is now developing a method to understand if the identified viruses differ from those known under our latitudes and from the databases.