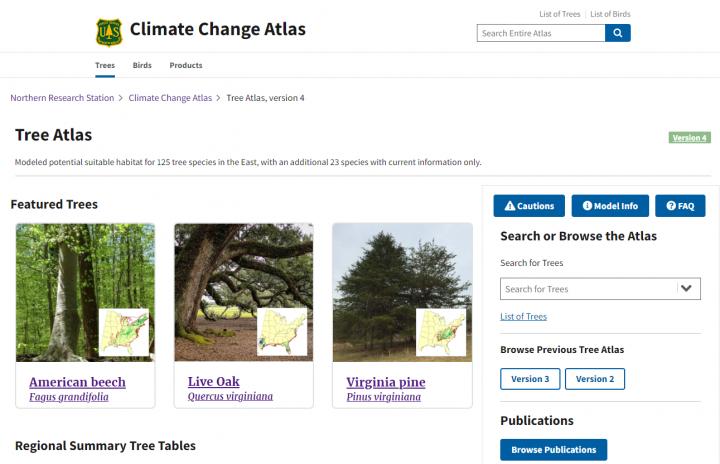 Delaware, Ohio, April 21, 2021– For 20 years, the USDA Forest Service’s Climate Change Atlas has been giving foresters in the Eastern United States insight into how future habitat conditions may affect tree species, from dramatic change (a big increase of cedar elm, for example, and a big loss in balsam poplar) to the fairly neutral (red maple). The Forest Service scientists who designed the Climate Change Atlas recently completed a major overhaul of the online tool, including new predictor variables, an updated modeling framework, updated data, information on potential migration, and a revised series of four tutorials on how to use the Atlas.

“Science-based forest management offers a natural solution to climate change in the United States, and our challenge is to not only develop that science but to package it in formats that are convenient, accurate, and useful to forest managers,” said Cynthia West, Director of the Northern Research Station and the Forest Products Laboratory. “The Climate Change Atlas exemplifies how Forest Service research serves land managers in our region.”

Updates to the Climate Change Atlas include place-based summaries of current tree species ranked in order of importance, potential tree species shifts within the area, and potential species to consider for planting for individual national forests, national parks, urban areas, ecoregions, watersheds as well as full coverage by 1×1 degree grids, across the Eastern United States.