A recent global study, with the participation of scholars from City University of Hong Kong (CityU), found broad contamination of common pharmaceuticals in many of the world’s rivers, including two Hong Kong rivers: the Kai Tak River and the Lam Tsuen River. This study revealed that more than a quarter of the 1,052 locations included in the study had pharmaceutical concentrations at potentially toxic levels for the environment and human health. Based on their findings, the authors call for new paradigms of environmental monitoring of different kinds of pollutants, across different environmental media, and under a global, inclusive and interconnected management. 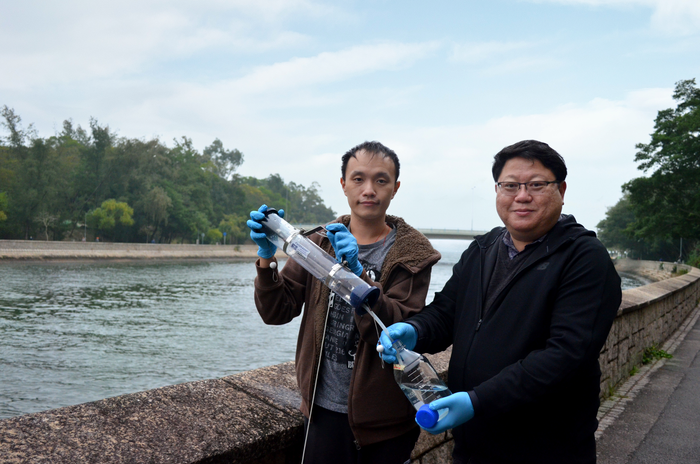 A recent global study, with the participation of scholars from City University of Hong Kong (CityU), found broad contamination of common pharmaceuticals in many of the world’s rivers, including two Hong Kong rivers: the Kai Tak River and the Lam Tsuen River. This study revealed that more than a quarter of the 1,052 locations included in the study had pharmaceutical concentrations at potentially toxic levels for the environment and human health. Based on their findings, the authors call for new paradigms of environmental monitoring of different kinds of pollutants, across different environmental media, and under a global, inclusive and interconnected management.

Professor Kenneth Mei Yee Leung (Director of the State Key Laboratory of Marine Pollution (SKLMP), and Acting Head and Chair Professor in the Department of Chemistry at CityU), and his postdoctoral fellow, Dr Racliffe Weng Seng Lai, participated in this global project co-led by Professor Alistair B.A. Boxall and Dr John L. Wilkinson from the University of York in the United Kingdom. Their findings were recently published in the respected science journal Proceedings of the National Academy of Sciences of the United States of America, entitled “Pharmaceutical Pollution of the World’s Rivers“.

The co-leader of the project, Dr John Wilkinson, explained: “We’ve known for over two decades now that pharmaceuticals make their way into the aquatic environment where they may affect the biology of living organisms. But one of the largest problems we have faced in tackling this issue is that we have not been very representative when monitoring these contaminants, with almost all of the data focused on a few selected areas in North America, Western Europe and China.”

Professor Kenneth Leung added: “This unique global project impressively mobilised 127 scientists and used standardised methods for collecting water samples from 258 rivers around the world and analysing 61 commonly used pharmaceuticals. This standardised method allowed a fair global comparison for the first time. We were delighted to play a part in this meaningful project, and contribute to sample collections in Hong Kong and Bhutan, and statistical analyses of the data.”

The previous related studies touched only on the ‘tip of the iceberg’, said Professor Leung. He explained that these previous studies employed different analytical methods and monitored different pharmaceuticals. Cumulatively, this has made it difficult to quantify the scale of the problem from a global perspective and leaves a substantial knowledge gap and uncertainty about the actual rate of pharmaceutical pollution around the world.

This first and most extensive monitoring covered all seven continents, 137 countries and regions, and 258 rivers. It included areas with a broad spectrum of anthropogenic activities, ranging from an Amazon Yanomami Village inhabited by only indigenous people, to megacities, such as Delhi, New York, Lagos, Manila, Hong Kong, and Guangzhou. Importantly, 36 sampled countries and regions in the study had not been previously monitored for pharmaceutical contamination. Most of them were in sub-Sahara Africa, South America and parts of southern Asia. Four rivers in these countries were ranked among the top 10 most polluted rivers. At least one pharmaceutical product out of the 61 evaluated was detected in each of the sampled rivers, except for the two rivers in Iceland and the one in the Amazon’s Yanomami Village. This implies that the previous research efforts largely overlooked many areas where there are higher risks from pharmaceuticals to the ecosystem and human health.

Four chemical compounds–caffeine, nicotine, cotinine and acetaminophen/paracetamol–were readily detected across all seven continents, and an additional 14 pharmaceuticals were detected in all continents except for Antarctica. Many of them also had a high measured concentration in the studied riverine systems. These pharmaceutical contaminants include analgesics, antibiotics, anticonvulsants, antihistamines, antihyperglycemics and stimulants, which are commonly used in our daily life.

Statistical analyses conducted by Professor Leung and Dr Lai identified a strong correlation between the socioeconomic status of a country and the level of pharmaceutical pollution in its rivers. Rivers in lower-middle income countries were found to be the most polluted. High levels of pharmaceutical pollution were most positively associated with regions with a relatively high median age and those with high local unemployment and poverty rates. Key activities most associated with the severe pharmaceutical pollution included rubbish dumping along riverbanks, inadequate wastewater infrastructure and pharmaceutical manufacturing, and the dumping of contents of residual septic tanks into rivers. Though the analysis was preliminary, it revealed that socioeconomic status and human health may be key predictors of local environmental pollution.

Many Asian countries and regions generally have less pharmaceutical contamination than other countries. Among the 258 sampled rivers, the two rivers in Hong Kong, the Kai Tak River and the Lam Tsuen River, were ranked as the 29th and 70th most polluted rivers, respectively. The Kai Tak River had the highest number of detectable pharmaceuticals in this global study; 34 different pharmaceuticals were detected at one of its sampled locations. Similarly, two tributaries of the Pearl River, sampled by Professor Ying Guangguo’s team from South China Normal University, also had high pharmaceutical contamination rankings. This has raised concerns and call for a more thorough understanding of pharmaceutical pollution in the aquatic environments of Hong Kong and the Greater Bay Area, including their riverine, estuarine and oceanic regions.

A warning on antimicrobial-resistant “Superbugs”

Antibiotics are broadly applied to deal with diseases related to bacterial infection but their release into the environment may perturb the natural bacterial community and affect beneficial bacteria that assist with carbon and nutrient recycling in the ecosystem. Also, when exposed to antibiotics, bacteria can evolve to become resistant to the antibiotics, thus reducing the efficiency of general antibiotic treatments and turning into “superbugs”. In Hong Kong, the Kai Tak River and the Lam Tsuen River were ranked as the 20th and 75th rivers most polluted with antibiotics out of 258 rivers in the study. Six different antibiotics out of the 13 monitored were detected in the Kai Tak River and two were found in the Lam Tsuen River. In particular, measured environmental concentrations of the antibiotics ciprofloxacin and clarithromycin in the Kai Tak River exceeded the safety threshold by 1.3 and 5.5 times, respectively, implying a high risk of these two antibiotics to induce antimicrobial resistance.

This study forms part of the Global Monitoring of Pharmaceuticals Project (https://www.globalpharms.org/) led by the University of York, which is the first truly global-scale investigation of medicinal contamination in the aquatic environment. 61 kinds of pharmaceuticals were studied and it covered all seven continents, 137 countries and regions, 258 rivers and 1,052 locations. The study produced around 130K data points and represented the potential anthropogenic influences from 471.4 million people living close to the catchment areas of the studied rivers.

“With 127 collaborators across 86 institutions worldwide, the Global Monitoring of Pharmaceuticals Project is an excellent example of how the global scientific community can come together to tackle large-scale environmental issues.” said Dr John Wilkinson.

“The study identified rivers with high pharmaceutical contamination and high-risk chemicals. With this information, it is possible to formulate practical and integrative strategies, from legislation to education and pollution control, to minimise the release of these chemicals and create cleaner rivers across the globe,” remarked by Professor Kenneth Leung.

Inspired by this study, a new global project, the Global Estuaries Monitoring (GEM) Programme, was recently launched and endorsed as an Ocean Decade Action under the United Nations Decade of Ocean Science for Sustainable Development (2021-2030). The GEM Programme, led by Professor Kenneth Leung from the SKLMP and the Department of Chemistry at CityU, will investigate pollutants in major estuaries around the world, including pharmaceutical residues. More information about the GEM Programme could be found at: https://www.globalestuaries.org/.

Dr John Wilkinson from the University of York is the first author and corresponding author of the study. Professor Alistair Boxall is his supervisor. Professor Kenneth Leung and Dr Racliffe Lai, his postdoctoral fellow, are co-authors of the paper. The study was conducted by a consortium of 127 collaborators, representing 86 institutions worldwide. The funding bodies include the Medical Research Council, the British Council Institutional Links STREAM programme, the Instituto Antartico Chileno Regular Funding Projects, ANID PIA Anillo INACH ACT192057, and ANID FONDECYT 1210946.

Pharmaceutical Pollution of the World’s Rivers