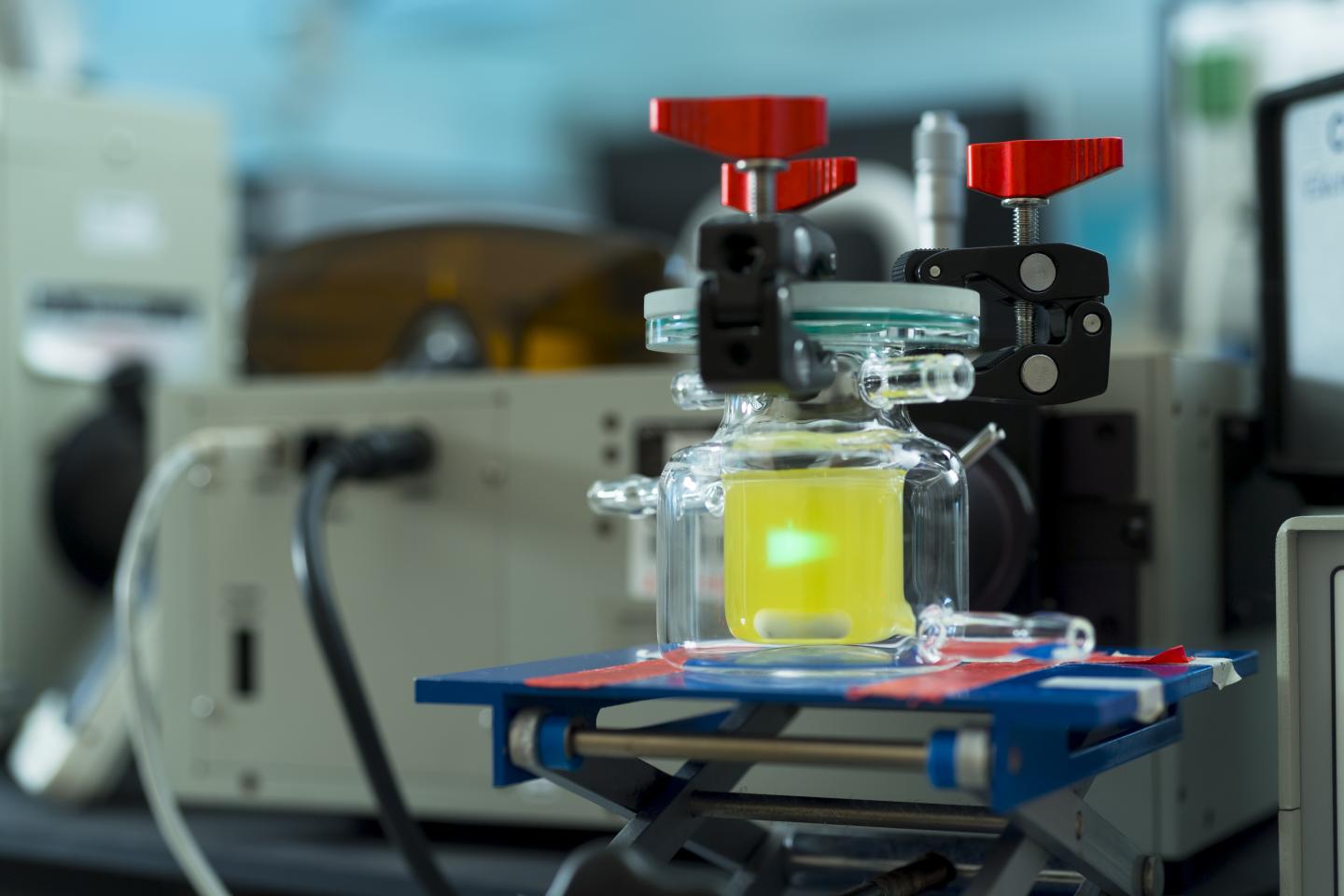 The contributions of an environmental scientist of City University of Hong Kong (CityU) to the field of photoelectrocatalysis have made him the only winner of the 2019 Asia-Pacific Economic Cooperation (APEC) Science Prize for Innovation, Research and Education (ASPIRE).

The award-winning research of Dr Ng Yun-hau, Associate Professor of the School of Energy and Environment at CityU, involves the application of a new zero-pollution technology that can help to resolve both issues of energy shortage and excessive carbon dioxide emissions.

He uses sunlight to split water into hydrogen which is regarded as clean renewable energy. And he applies photoelectrocatalysis to enhance the efficiency of converting solar energy into hydrogen fuel. No pollution is caused during the hydrogen production process.

Dr Ng received his award at the APEC Policy Partnership on Science, Technology and Innovation (PPSTI) Meeting held in Chile last month. “I feel very honoured to represent Hong Kong and CityU to receive this prize. It is a great encouragement to me and my research team. We will continue to work hard on our road for rigorous research, aiming to make more achievements to contribute to society,” he said.

This year, the theme of the award is “Natural Laboratories”, focusing on scientific developments through the discovery in nature, or “natural laboratories”. Splitting water into hydrogen has been regarded as one of the artificial photosynthesis approaches for converting solar energy into usable fuel and emitting oxygen, mimicking natural photosynthesis.

Improving the composition of semiconductor used for photoelectrocatalysis

Over the past ten years, Dr Ng has been focusing his research on improving the composition of semiconductor used for photoelectrocatalysis to enhance its conversion efficiency of solar energy during the water splitting process. He uses semiconductor in the form of powder, which does not require external energy source to kick start the chemical reaction. It is more environmental friendly yet more difficult to achieve.

“When using hydrogen to generate energy, the only by-product is water without any pollution. So it is regarded as clean energy. And the system we developed does not need any external energy to produce hydrogen. Hence it is pollution-free, either during the process of hydrogen generation or application. And it can help to resolve the crisis of energy shortage,” Dr Ng said.

In addition, titanium oxide, one of the materials for producing semiconductors, can be obtained from the sand in the sea or river bed. Oxidised or rusted copper and iron can also be used as materials to produce semiconductors for photoelectrocatalysis, which accords with the principles of environmental protection.

Dr Ng currently focuses his studies on the fundamental theory of photoelectrocatalysis, with the aim of making a breakthrough in improving the conversion efficiency. It is expected that when the technology can be transferred for commercialisation, it can be used for fuel cells for laptops and mobile phones, and can also be applied to fuel cell vehicles in the future.

“It is important for humans to resolve the problems of energy shortage and the greenhouse effect. As a researcher, I hope that I can contribute by developing renewable energy. And that’s the reason for me to focus my research in this discipline” he said.

Dr Ng joined CityU in 2018. Since starting his research on photoelectrocatalysis in 2006, he has published about 130 academic papers in leading journals. His work has been featured nine times as cover stories in prestigious scientific journals like Advanced Materials, Advanced Energy Materials, Journal of Materials Chemistry A and Nano Research. In addition, he has received numerous awards, including being the first non-Japanese to win the prestigious Honda-Fujishima Prize in 2013, and was presented the Distinguished Lectureship Award by the Chemical Society of Japan in 2018. His work has been cited 8100 times, H-index is 37 and has 11 ESI Top 1% highly cited papers. He is also one of the reviewers of Journal of the American Chemical Society and Angewandte Chemie International Edition.

The annual ASPIRE Prize aims to promote economic growth, trade, investment and sustainable development for member countries of APEC. The Prize recognises young scientists who are under the age of 40 and have demonstrated a commitment to both excellence in scientific research as shown by scholarly publications as well as co-operation with scientists from other APEC economies. The winner will receive a USD25,000 prize.

Scienmag Dec 16, 2019
Credit: Regenstrief Institute INDIANAPOLIS -- Most hospitals in the United States, but not all, have secure online…