Citizen scientists have discovered a new object orbiting a Sun-like star that had been missed by previous searches. The object is very distant from its host star—more than 1,600 times farther than the Earth is from the Sun—and is thought to be a large planet or a small brown dwarf, a type of object that is not massive enough to burn hydrogen like true stars. Details about the new world are published today in The Astrophysical Journal. 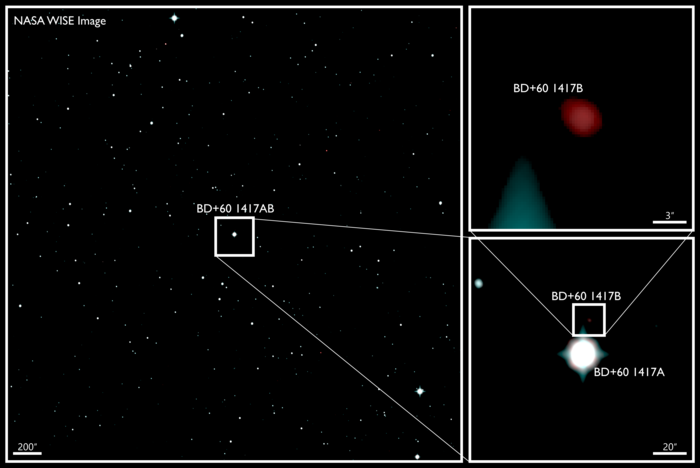 Citizen scientists have discovered a new object orbiting a Sun-like star that had been missed by previous searches. The object is very distant from its host star—more than 1,600 times farther than the Earth is from the Sun—and is thought to be a large planet or a small brown dwarf, a type of object that is not massive enough to burn hydrogen like true stars. Details about the new world are published today in The Astrophysical Journal.

“This star had been looked at by more than one campaign searching for exoplanet companions. But previous teams looked really tight, really close to the star,” said lead author Jackie Faherty, senior scientist in the American Museum of Natural History’s Department of Astrophysics and co-founder of the citizen science project Backyard Worlds: Planet 9, which led to the object’s discovery. “Because citizen scientists really liked the project, they found an object that many of these direct imaging surveys would have loved to have found, but they didn’t look far enough away from its host.”

The Backyard Worlds project lets volunteers search through nearly five years of digital images taken from NASA’s Wide-field Infrared Survey Explorer (WISE) mission to try to identify new worlds inside and outside of our solar system. If an object close to Earth is moving, it will appear to “jump” in the same part of the sky over the years, similar to an object “moving” in a flipbook. Users can then flag these objects for further study by scientists.

In 2018, Backyard Worlds participant Jörg Schümann, who lives in Germany, alerted scientists to a new co-moving system: an object that appeared to be moving with a star. After confirming the system’s motion, scientists used telescopes in California and Hawai’i to observe the star and object separately and were immediately excited by what they saw.

The new object is young and has a low mass, between 10 and 20 times the mass of Jupiter. This range overlaps with an important cutoff point—13 times the mass of Jupiter—which is sometimes used to distinguish planets from brown dwarfs. But scientists still aren’t sure how heavy planets can be, which can make relying on this cutoff challenging. “We don’t have a very good definition of the word ‘planet,’” said Faherty.

Another defining feature is how they form: planets form from material gathering in disks around stars, while brown dwarfs are born from the collapse of giant clouds of gas, similar to how stars form. But the physical properties of this new object do not provide any clues to its formation. “There are hints that maybe it’s more like an exoplanet, but there’s nothing conclusive yet. However, it is an outlier,” said Faherty.

What surprised the team the most is the new object’s relationship to its host star. The object is farther away from the star than expected based on its comparatively low mass—over 1,600 times farther than the Earth is from the Sun. Few objects with such different masses from their host star have been found this far apart.

Ultimately, this discovery may help scientists get a better sense of how solar systems form, which is crucial to understanding the origins of life in the universe. “You had an exoplanet community just staring so close to it,” said Faherty. “And we just pulled out a little, and we found an object. That makes me excited about what we might be missing in giant planets that might exist around these stars,” said Faherty. “Sometimes, you need to broaden your scope.”

The American Museum of Natural History, founded in 1869, is one of the world’s preeminent scientific, educational, and cultural institutions. The Museum encompasses more than 40 permanent exhibition halls, including those in the Rose Center for Earth and Space, and the Hayden Planetarium, as well as galleries for temporary exhibitions. The Museum’s scientists draw on a world-class permanent collection of more than 34 million specimens and artifacts, some of which are billions of years old, and on one of the largest natural history libraries in the world. Through its Richard Gilder Graduate School, the Museum grants the Ph.D. degree in Comparative Biology and the Master of Arts in Teaching (MAT) degree, the only such freestanding, degree-granting program at any museum in the United States. The Museum’s website, digital videos, and apps for mobile devices bring its collections, exhibitions, and educational programs to millions around the world. Visit amnh.org for more information.