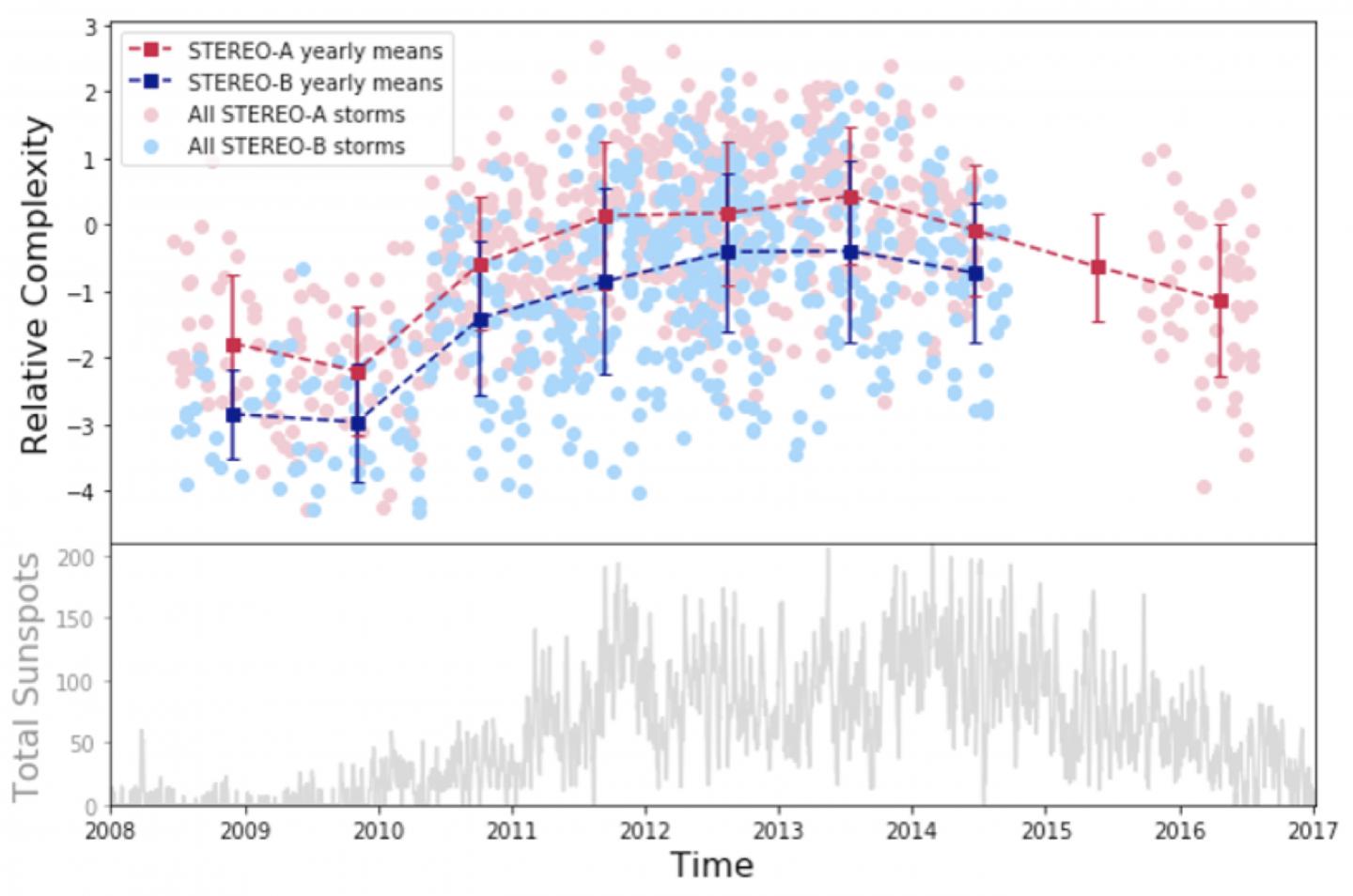 Citizen scientists have discovered that solar storms become more complex as the Sun’s 11-year activity cycle reaches its maximum – a finding which could help forecasters predict which space weather events could have potentially devastating consequences for modern technologies at Earth.

‘Protect our Planet from Solar Storms’, a research project launched by the University of Reading, the Science Museum Group and Zooniverse in May 2018, asked volunteers to evaluate pairs of images of Coronal Mass Ejections (CMEs) and decide which seemed the most visually complex.

Overall, the project ranked the complexity of 1100 observations of CMEs taken by the wide-angle Heliospheric Imagers on-board NASA’s twin STEREO spacecraft. The results will be presented at the RAS National Astronomy Meeting in Lancaster today (Tuesday, 2nd July) and will feature in the exhibition The Sun, which opens at the Science and Industry Museum, in Manchester, on 20th July.

“The STEREO spacecraft capture images of solar storms as they erupt from the Sun. Some CMEs look very simple, like bubbles, while others are far more complex, like shattered light bulbs. Surprisingly, we found that the annual average complexity values actually follow the solar activity cycle,” said Shannon Jones of the University of Reading.

CMEs are a key driver of hazardous space weather that, if directed at Earth, can cause serious damage to electricity grids, satellite navigation and communication infrastructure. Current prediction methods, based on the direction of the magnetic field within solar storms, are only really effective around an hour before the storm hits our planet. The complexity of an eruption could provide advanced warning about its likelihood of causing disruption.

“The most damaging storms have a magnetic field that is offset by 180 degrees to Earth’s. Because complex storms have a magnetic field that keep changing direction, they are more likely to move into this alignment at least for a short period of time. The link between complexity and the solar cycle is important because not only are there more storms during solar maximum, their variability makes them more likely to contain an orientation of magnetic field that may affect our modern technologies,” said Chris Scott of the University of Reading, who devised the study.

The Reading team has now launched a new phase of experiments on Zooniverse, where volunteers will assess the impact of brightness on complexity, weigh up how to quantify complexity, and study differences in the STEREO A and B cameras.

“Our results show that storms in the STEREO B camera were consistently ranked as less complex than in STEREO A, and that might be because the two cameras are not identical,” said Ms Jones. “As we know the size of an object each camera can resolve, this might give a clue to the size of structures that people interpret as complex. The input of the citizen science volunteers will be invaluable in helping us start to understand the structure of CMEs in more detail.”

The RAS National Astronomy Meeting is taking place at Lancaster University until 4th July. The Sun opens at the Science and Industry Museum, Manchester, on 20th July and runs until 5th January 2020.

Scienmag May 1, 2019
Discovery will help end 'diagnostic odyssey' for many familiesCredit: University of Sussex Researchers…