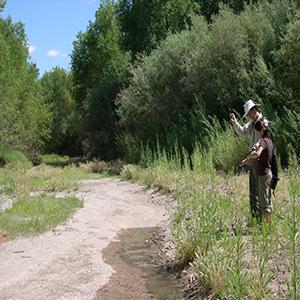 A University of Oklahoma-led project is showing how citizen science programs provide valuable data on rivers in southwestern United States. The datasets of ecological and hydrological data obtained from intermittent rivers (rivers that dry at some point in space or time) in Arizona are input into a nationwide network. Trained citizen scientists are mapping three rivers in Arizona: the San Pedro River, Cienega Creek and Agua Fria River. The wet and dry data collected yearly from these programs map information on how to best manage water resources under a changing climate.

“It is difficult to get good quality data about how much water is in intermittent rivers. Most of our existing infrastructure for measuring river flows in the United States is geared towards monitoring water levels of perennial rivers, which are those that always flow. Citizen science groups provide valuable contributions to the field of river science, as the data they produce would not be available otherwise. Without that data we wouldn’t be able to answer basic research questions like how the length of wet river reaches in these rivers has changed over time, and what these changes might mean for fish that live in these rivers,” said Daniel Allen, assistant professor in the Department of Biology, OU College of Arts and Sciences.

In this study, these three groups of citizen scientists divide up and measure the river using a simple method that includes measuring the river from where it begins to where it ends in places where there is at least 30 feet of water. The three long-term wet and dry datasets produced by citizen science river monitoring programs describe landscape drying patterns, examine how they vary over time and use models to quantify landscape drying patterns and temperature, precipitation, stream flow and drought metrics.

The data from these surveys is used to generate maps on long-term trends in the three rivers. Two of the rivers measured in this study, the Cienega Creek and the Agua Fria River, showed significant decline. The San Pedro is the only one of three rivers did not decline, which may be due to a groundwater management resource plan in effect. It may be that the declining rivers have no protection and groundwater use has increased during the recent droughts in the area, leading to surface water declines.

Changes in landscape drying patterns in intermittent rivers have strong implications for fish connectivity and bird migration. Drying patterns are likely to decrease connectivity for native fish who need long stretches of unbroken river to reproduce. Rivers in this region are important for the millions of birds that migrate from South America and stop in the region on their way north. The cottonwood and willow trees where they roost during resting periods are typically only found next to rivers where there is water year round. The southwestern United States has experienced large droughts over the past several decades, and the extent of river drying will likely continue as a result of climate change.

Citizen science programs focused on mapping wet and dry sections of rivers and streams are valuable and could be expanded unmonitored intermittent rivers. New technologies, such as smartphone applications, are being developed to improve efforts and aid in integrating data collected by different programs. This type of program could be expanded across the United States to study the variables impacting intermittent rivers in different climates and by different intensities of human water use.

This study is part of a larger effort to create an intermittent river research coordination network funded with a $500,000 grant from the National Science Foundation. A paper is available in the journal Freshwater Science at https://www.journals.uchicago.edu/doi/full/10.1086/701483. For more information, contact Professor Allen at [email protected]

Dr. Johan Auwerx to present at the 6th Aging Research for Drug Discovery Forum in Basel

Scientists examine how a gut infection may produce chronic symptoms

Scienmag Jan 10, 2020
Credit: Laboratory of Mucosal Immunology Sometimes the end of an intestinal infection is just the beginning of…