Cities of the future may be built with algae-grown limestone

Global cement production accounts for 7% of annual greenhouse gas emissions in large part through the burning of quarried limestone. Now, a CU Boulder-led research team has figured out a way to make cement production carbon neutral—and even carbon negative—by pulling carbon dioxide out of the air with the help of microalgae. 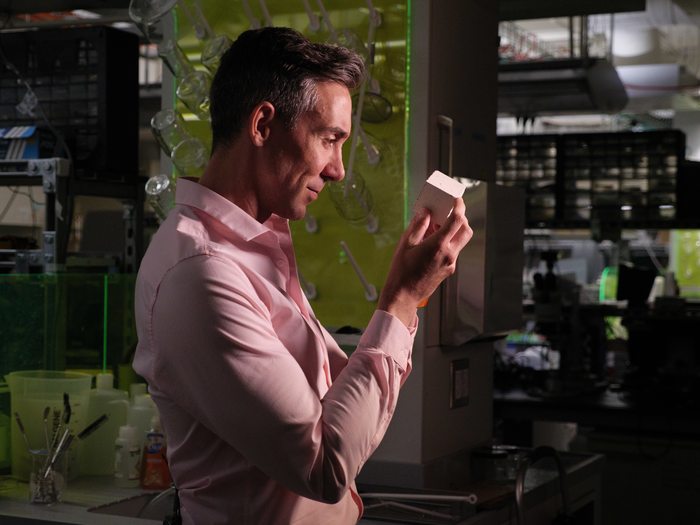 Global cement production accounts for 7% of annual greenhouse gas emissions in large part through the burning of quarried limestone. Now, a CU Boulder-led research team has figured out a way to make cement production carbon neutral—and even carbon negative—by pulling carbon dioxide out of the air with the help of microalgae.

The CU Boulder engineers and their colleagues at the Algal Resources Collection at the University of North Carolina Wilmington (UNCW) and the National Renewable Energy Laboratory (NREL) have been rewarded for their innovative work with a $3.2 million grant from the U.S. Department of Energy’s (DOE) Advanced Research Projects Agency – Energy (ARPA-E). The research team was recently selected by the HESTIA program (Harnessing Emissions into Structures Taking Inputs from the Atmosphere) to develop and scale up the manufacture of biogenic limestone-based portland cement and help build a zero-carbon future.

“This is a really exciting moment for our team,” said Wil Srubar, lead principal investigator on the project and associate professor in Civil, Environmental and Architectural Engineering and CU Boulder’s Materials Science and Engineering Program. “For the industry, now is the time to solve this very wicked problem. We believe that we have one of the best solutions, if not the best solution, for the cement and concrete industry to address its carbon problem.”

Concrete is one of the most ubiquitous materials on the planet, a staple of construction around the world. It starts as a mixture of water and portland cement, which forms a paste to which materials such as sand, gravel or crushed stone are added. The paste binds the aggregates together, and the mixture hardens into concrete.

To make portland cement, the most common type of cement, limestone is extracted from large quarries and burned at high temperatures, releasing large amounts of carbon dioxide. The research team found that replacing quarried limestone with biologically grown limestone, a natural process that some species of calcareous microalgae complete through photosynthesis (just like growing coral reefs), creates a net carbon neutral way to make portland cement. In short, the carbon dioxide released into the atmosphere equals what the microalgae already captured.

Ground limestone is also often used as a filler material in portland cement, typically replacing 15% of the mixture. By using biogenic limestone instead of quarried limestone as the filler, portland cement could become not only net neutral, but also carbon negative by pulling carbon dioxide out of the atmosphere and storing it permanently in concrete.

This could theoretically happen overnight, as biogenic limestone can “plug and play” with modern cement production processes, said Srubar.

“We see a world in which using concrete as we know it is a mechanism to heal the planet,” said Srubar. “We have the tools and the technology to do this today.”

Srubar, who leads the Living Materials Laboratory at CU Boulder, received a National Science Foundation CAREER award in 2020 to explore how to grow limestone particles using microalgae to produce concrete with positive environmental benefits. The idea came to him while snorkeling on his honeymoon in Thailand in 2017.

He saw firsthand in coral reefs how nature grows its own durable, long-lasting structures from calcium carbonate, a main component of limestone. If nature can grow limestone, why can’t we? he thought.

“There was a lot of clarity in what I had to pursue at that moment. And everything I’ve done since then has really been building up to this,” said Srubar.

He and his team began to cultivate coccolithophores, cloudy white microalgae that sequester and store carbon dioxide in mineral form through photosynthesis. The only difference between limestone and what these organisms create in real time is a few million years.

With only sunlight, seawater, and dissolved carbon dioxide, these tiny organisms produce the largest amounts of new calcium carbonate on the planet, and at a faster pace than coral reefs. Coccolithophore blooms in the world’s oceans are so big, they can be seen from space.

“On the surface, they create these very intricate, beautiful calcium carbonate shells. It’s basically an armor of limestone that surrounds the cells,” said Srubar.

These microalgae are hardy little creatures, living in both warm and cold, salt and fresh waters around the world, making them great candidates for cultivation almost anywhere—in cities, on land, or at sea. According to the team’s estimates, only 1 to 2 million acres of open ponds would be required to produce all of the cement that the U.S. needs—0.5% of all land area in the U.S. and only 1% of the land used to grow corn.

And limestone isn’t the only product microalgae can create: microalgae’s lipids, proteins, sugars and carbohydrates can be used to produce biofuels, food and cosmetics, meaning these microalgae could also be a source of other, more expensive co-products—helping to offset the costs of limestone production.

To create these co-products from algal biomass and to scale up limestone production as quickly as possible, the Algal Resources Collection at UNCW is assisting with strain selection and growth optimization of the microalgae. NREL is providing state-of-the art molecular and analytical tools for conducting biochemical conversion of algal biomass to biofuels and bio-based products.

There are companies interested in buying these materials, and the limestone is already available in limited quantities.

Minus Materials, Inc., a CU startup founded in 2021 and the team’s commercialization partner, is propelling the team’s research into the commercial space with financial support from investors and corporate partnerships, according to Srubar, a co-founder and acting CEO. Minus Materials previously won the university-wide Lab Venture Challenge pitch competition and secured $125,000 in seed funding for the enterprise.

The current pace of global construction is staggering, on track to build a new New York City every month for the next 40 years. To Srubar, this global growth is not just an opportunity to convert buildings into carbon sinks, but to clean up the construction industry. He hopes that replacing quarried limestone with a homegrown version can also improve air quality, reduce environmental damage, and increase equitable access to building materials around the world.

“We make more concrete than any other material on the planet, and that means it touches everybody’s life,” said Srubar. “It’s really important for us to remember that this material must be affordable and easy to produce, and the benefits must be shared on a global scale.”