Cinema in Flux | The Evolution of Motion Picture Technology 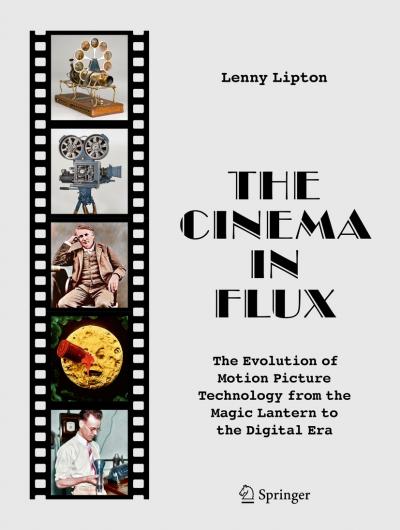 The new Springer book, The Cinema in Flux, by lifetime innovator Lenny Lipton, explores the history of cinema technology by upending the conception that the medium began at the end of the 19th century. A major thesis of the book is that cinema, the projection of motion, began with the invention of the magic lantern in the 17th century.

This book, and its more than 500 illustrations, many in colour, effectively visualizes the shift from real to apparent motion by means of an organization that divides cinema into historical epochs: The Glass Era, The Celluloid Era, and The Digital Era. This innovative classification system posits that designating the carrier of image information, which materially distinguishes that period’s technology, effectively conveys the structure of the evolution of motion pictures in its entirety. “The Cinema in Flux is on the trail of a vitally important nexus between the illusion of motion and the story contained within that illusion,” writes director and visual effects innovator, Douglas Trumball in the foreword.

“The book, while focused on cinema’s technology, does not ignore the personalities of those who were instrumental in its evolution. It further provides context to the development of cinema technology, societal, business, and intellectual property factors as they are likewise called to the reader’s attention in order to reflect the richness of cinema technology,” says Lenny Lipton.

The encyclopedic book elucidates the rich and varied aspects of the history of filmmaking’s technology. With this engaging, scientifically structured account, the author hopes to spark more widespread interest in the fascinating history of motion picture technology. The Cinema in Flux will appeal to anyone interested in the history and science of cinema, from movie buffs to academics to members of the industry. Cinema now takes its place as a legitimate subject area in the history of technology.

Lenny Lipton founded StereoGraphics Corporation in 1980 and was the Chief Technology Officer of RealD during the introduction of digital stereoscopic theatrical exhibition. He led the team that invented the ZScreen, used in more than 30,000 RealD 3-D theaters, and was the first to demonstrate the flickerless projection technique used on 80,000 3-D cinema screens. He has written four books, including Independent Filmmaking (1972) and Foundations of the Stereoscopic Cinema (1982). He is a Fellow of both the SMPTE and the SPIE, and a member of the Scientific Council of the Conservatoire des techniques of the Cinémathèque Française. He’s been granted 72 patents in the field of electronic stereoscopic displays and received a Smithsonian award for his invention of CrystalEyes, the original electronic stereoscopic eyewear product, and he received the Lumiere Lifetime Achievement Award from the Advanced Cinema Society. While majoring in physics at Cornell he wrote the lyrics of the song Puff the Magic Dragon. He produced and directed 25 independent films in the collection of the Pacific Film Archive.

The Cinema in Flux

Also available as an eBook