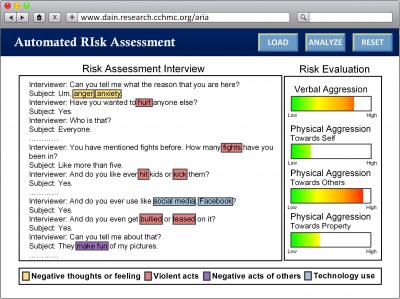 CINCINNATI – Scientists at Cincinnati Children’s have been awarded a five-year grant totaling $2.8 million from the National Institute of Child Health and Human Development to develop an automated risk assessment (ARIA) system, which is designed to detect and prevent school violence.

They say there is a critical need to develop a rapid and accurate approach to interview students, assess risk characteristics, and provide supportive evidence for prevention.

“Our goal is to prevent those strains of aggressive behaviors before they grow to some major problems like a school shooting,” Ni says. “We try to prevent that at the earliest stage so that it can prevent some sort of violence.”

The study is highly innovative. It will be among the first efforts that leverage natural language processing (NLP) and machine learning to analyze interviews, identify risk characteristics from student language, and predict violent outcomes.

As stress and dependence on digital media by adolescents continues to increase during the pandemic and its aftermath, this timely research will help improve safety as students return to full in-person study at schools.

The grant will enable the scientists to build off of a previous study and refine the artificial intelligence technology to predict potential future violent outcomes.

Acts of school violence have increased over the past decade, and more than 20% of students report being bullied at school, according to the Centers for Disease Control and Prevention. Violence has a far-reaching impact on the entire school population, including staff, students and families.

“Typically with school violence, there are red flags,” Barzman says. “There might be a threat or bullying. The victim may be at risk for becoming a school shooter or the bully (might become a shooter). There might be some other psychiatric concerns as well, so we’re looking … to help out before it escalates to the point that it becomes school violence or a school shooting.”

The goal is to help establish a nationwide solution for school violence risk assessment, which will benefit healthcare institutions, schools, and students.

In their research, Barzman and Ni are including all spectrums of violence: verbal threats, physical aggression and bullying. They plan to recruit 1,000 participants, from 10- to 17-years-old.

Barzman and Ni say using AI is like using a clinical-decision support tool. They ask participants a series of 28 questions. While the participants answer those questions, an automated, computerized system will analyze the responses, predict risk potentials, and improve prevention by helping inform recommendations.

“When we use the AI technology, the idea is to help our clinicians make more efficient and more effective decisions,” Ni says. “It’s not to replace our psychiatry. It’s to show that this is objective evidence we found from a student interview that might help you develop more effective strategies to mitigate their risk of violent behaviors.”

They use two scales in rating participants’ responses. Barzman and his team from Cincinnati Children’s created the Brief Rating of Aggression by CHildren and Adolescents (BRACHA). The School Safety Scale is a modified version from a gold standard risk assessment, the HCR-20 that was used in adult forensics. Cincinnati Children’s is serving as a national model in creating the BRACHA scale. Many hospitals have requested to use BRACHA.