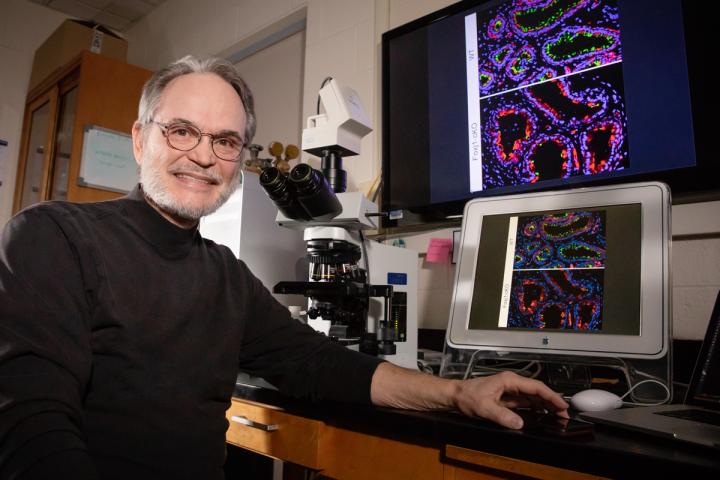 CHAMPAIGN, Ill. — Waves of undulating cilia drive several processes essential to life. They clear debris and mucus from the respiratory tract, move spinal fluid through the brain and transport embryos from the ovaries to the uterus for implantation. According to a new study in mice, however, cilia perform somewhat differently in the male reproductive tract.

The study, reported in the Proceedings of the National Academy of Sciences, reveals that cilia in the efferent ductules, which carry sperm away from the testes, don’t propel the sperm forward, as was once thought. Instead, the cilia agitate the sperm to keep them from aggregating and clogging the tubes so that they can reach their ultimate destination.

“Motile cilia are eyelashlike extensions of specific epithelial cells and have a beat that moves fluid over a surface,” said Rex Hess, a University of Illinois professor emeritus of comparative biosciences and a major collaborator on the study led by Dr. Wei Yan, a foundation professor of physiology and cell biology at the University of Nevada, Reno School of Medicine.

“For more than 150 years, most papers and books on the subject stated that motile cilia of the efferent ductules move sperm cells in one direction, like they do in the female fallopian tubes,” Hess said. “But we found that the cilia in this organ beat in an unusual manner that stirs and agitates the luminal fluid and sperm.

“The textbooks were wrong,” Hess said. “Cilia in the male don’t transport; they keep the sperm dancing.”

Contraction of smooth muscle lining the ductal walls moves the sperm into the epididymis.

“The research is also important because it focuses on microRNA, which is a product of a noncoding region of DNA,” Yan said. “In our study, we found that just two clusters of five microRNAs control the proper formation of motile cilia. That is amazing.”

When the Yan lab knocked out these microRNAs in mice, the researchers observed that the sperm aggregated into clumps that blocked the efferent ducts. This led to a backup of fluid in the testes, causing male infertility.

“Many infertile men may have clogged efferent ductules, but unfortunately this condition has been ignored due to a lack of knowledge on this important structure,” Yan said. “Our discovery has significant translational potential and may one day lead to new methods that can help patients.”

The paper “Motile cilia of the male reproductive system require miR-34/miR-449 for development and function to generate luminal turbulence” is available to members of the media from [email protected] and from the U. of I. News Bureau.