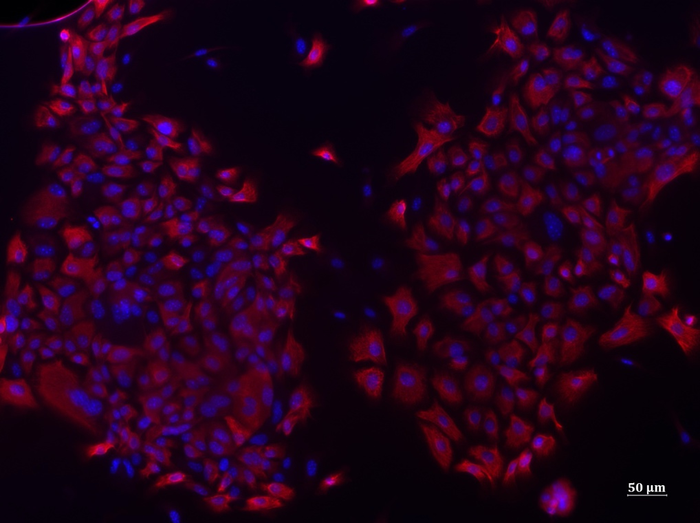 In 2019, the WHO positioned chronic obstructive pulmonary disease (COPD) third in the global ranking of causes of death. However, some mechanisms of this debilitating chronic respiratory disease are yet to be identified. Against this backdrop, scientists at the Institut Pasteur, Université de Paris, CNRS, Inserm, University of Reims Champagne-Ardenne, Reims University Hospital and the Institut Pasteur de Lille demonstrated that substituting a single nucleotide in the gene coding for the nicotinic acetylcholine receptor can lead to functional changes in airway cells and result in symptoms similar to COPD, independent of smoking. The scientists moreover identified the molecular mechanisms involved in this pathological phenomenon. The results of this research were published in the journal Nature Communications on November 4, 2021.

Chronic obstructive pulmonary disease (COPD) is a progressive chronic respiratory disease characterized by permanently obstructed airways. According to Santé publique France, it affects 5-10% of the French population aged over 45. Its symptoms include a chronic cough, sputum and breathing difficulties, which intensify over the course of several years and eventually become debilitating.

Previous genetic studies conducted in humans initially linked this disease to genes located on chromosome 15 coding for subunits of the nicotinic acetylcholine receptor (nAChR). In a new study, scientists at the Institut Pasteur, Université de Paris, CNRS, Inserm, University of Reims Champagne-Ardenne, Reims University Hospital and the Institut Pasteur de Lille focused their research on the variability of a single nucleotide (an adenine base rather than a guanine base) in the CHRNA5 gene, coding for the alpha5 subunit of the nAChR receptor, on chromosome 15. This version of the gene occurs in the genomes of 37% of the European population. The scientists examined the effects of this variation on airway cells.

In the animal model carrying this version of the gene, the study revealed the onset of emphysema destroying the pulmonary alveolar walls, a phenomenon observed in COPD patients. “We revealed the biological impact of a mutation in a gene linked to COPD,” comments Valérian Dormoy, a lecturer and researcher at the Pulmonary Pathologies and Cellular Plasticity Inserm laboratory at the University of Reims Champagne-Ardenne and study joint last author. The scientists established a connection between the expression of this gene version and airway epithelium inflammation and remodeling. Functional impairment was observed in progenitor airway basal cells located in the deep layer of the epithelium and responsible for epithelial renewal. The scientists observed this dysfunction particularly during scarring of the bronchial epithelium.

The study findings were subsequently confirmed in humans. Histological analysis of cells from samples of nasal polyps from 123 non-smoking patients at Reims University Hospital also revealed a link between epithelial remodeling and this gene mutation. “This gene version appears to be a genetic predisposing factor for the disease independent of smoking. COPD onset then occurs subsequent to repeated lesions of airway tissue caused by other molecules including atmospheric pollutants,” comments Philippe Birembaut, (former) Head of Department at Reims University Hospital (University of Reims Champagne-Ardenne, Inserm) and study joint last author.

Moreover, the signaling pathways involved were identified through in vitro analysis of animal cells expressing the modified version of the nicotinic receptor. This could provide a pharmacological target for the development of a future treatment. “One of our objectives is to define the characteristics of COPD patients carrying this mutation in order to develop personalized medicine,” concludes Uwe Maskos, Head of the Integrative Neurobiology of Cholinergic Systems Unit at the Institut Pasteur (Université de Paris, CNRS) and study joint last author.

The nicotinic acetylcholine receptor is located in the cell membrane. It is activated by acetylcholine or nicotine and controls the entry of various ions (calcium and sodium) into the cell.