A UNIGE team has identified important regulatory mechanisms of the protein responsible for chromosome separation during cell division. 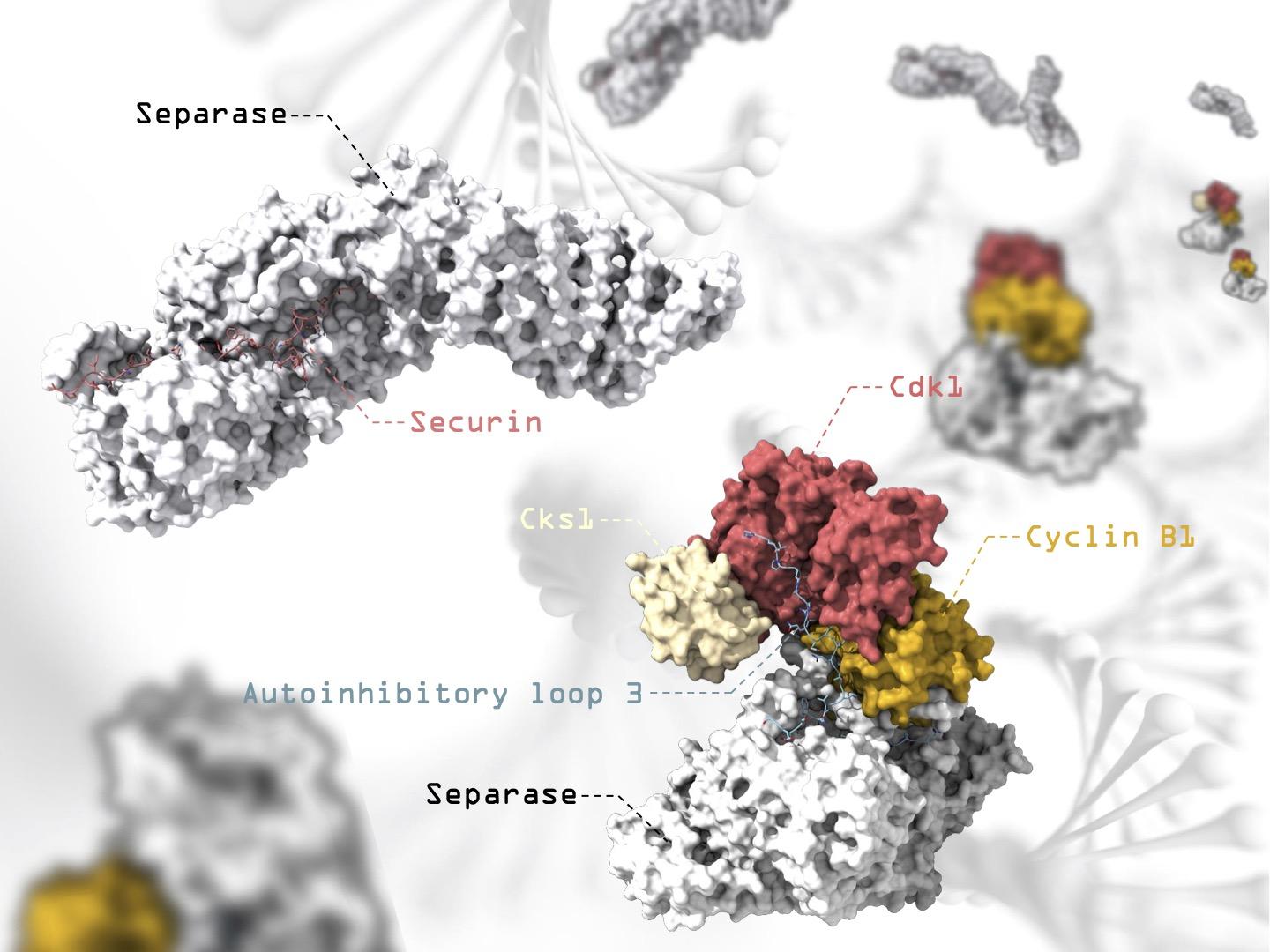 During cell division, chromosomes are duplicated and separated so that one copy of each chromosome is inherited by each of the two emerging daughter cells. Correct distribution of chromosomes requires high accuracy and defects in this process can cause aberrant distribution of chromosomes and facilitate cancer development. By analyzing the structure of the protein responsible for chromosome separation, an international team, led by scientists from the University of Geneva (UNIGE), has shed light on the mechanisms controlling this essential player in cell division. This work is published in the journal Nature.

Before dividing, the cell duplicates its DNA and goes from single chromosomes with one arm to double chromosomes with two identical arms linked together by a ring-shaped protein complex: cohesin. The two arms are then separated by the action of a molecular scissor – separase – which cuts a subunit of the cohesin complex to open up the ring. Once the chromosomes are separated, the cell divides and gives birth to two identical daughter cells. The cleavage of cohesin by separase is highly regulated and must occur only at a very specific time during the cell cycle. To achieve this, several inhibitory proteins independently block the activity of separase until the chromosomes have to be separated. However, up until now, the molecular mechanisms by which inhibitors control separase activity have remained elusive.

In this study led by the team of Andreas Boland, professor in the Department of Molecular Biology at the UNIGE Faculty of Science, the scientists used cryogenic electron microscopy (cryoEM). “This technique allows us to observe biological samples at very high resolution, while maintaining them in their natural state”, explains Jun Yu, researcher in the Department of Molecular Biology and first author of this study.

Using this method, they were able to determine several structures of human separase in complex with one of its inhibitors, revealing new regulatory mechanisms for the enzyme. “It turns out that these inhibitors occupy sites that also recognize the cohesin substrate, blocking the cleavage activity of the molecular scissors”, explains Andreas Boland.

Inhibiting a protein by changing its conformation

While one of the inhibitors, securin, binds directly to the molecular scissors to block its active site, another inhibitor – the CCC complex – acts through a more sophisticated mechanism. By binding to the periphery of separase, the CCC complex induces a conformational change in separase itself. As a result, loops in separase – usually flexible and disordered – are reorganized into a fixed position, leading to an auto-inhibition of the enzyme.

“Our work significantly contributes to the understanding of the mechanisms that regulate separase activation and could help design novel anti-cancer therapies”, concludes Andreas Boland.