Terrorist attacks are highly responsive to local funding availability, and financial counter-terrorism can, thus, be effective in reducing terrorism casualties, according to new research by Nicola Limodio (Department of Finance, Bocconi University) forthcoming in Econometrica. 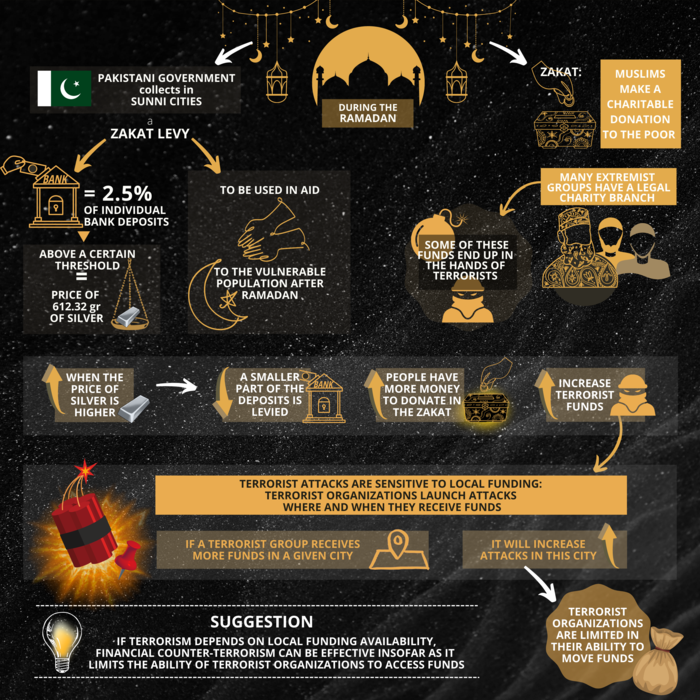 Terrorist attacks are highly responsive to local funding availability, and financial counter-terrorism can, thus, be effective in reducing terrorism casualties, according to new research by Nicola Limodio (Department of Finance, Bocconi University) forthcoming in Econometrica.

There has been a record number of terrorist attacks in the past decade. Many scholars agree that this might be driven by increases in the ability of terrorist organizations to secure funding and recruit new members. As a response, several financial counter-terrorism measures were launched. These are often efforts to ‘follow the money’ and freeze bank accounts of potential terrorists and their supporters. But financial counter-terrorism has been criticized as not only very costly but also ineffective, as terrorist organizations may be able to swiftly dissipate their funds through affiliates in several locations and to use it where and when they wish.

Nicola Limodio challenges the critics of financial counter-terrorism, offering evidence on the financial frictions faced by terrorist groups and the role of counterterrorism in further tightening these frictions. In his recent paper “Terrorism Financing, Recruitment and Attacks,” Prof. Limodio provides a pioneering quantitative assessment of terrorism, recruitment and financing. He shows that terrorist attacks are sensitive to local funding: terrorist organizations launch attacks where and when they receive funds. This is of clear policy relevance. If terrorism depends on local funding availability, financial counter-terrorism can be effective insofar as it limits the ability of terrorist organizations to access funds.

To arrive at this finding, Prof. Limodio studied the variation in funding to terrorist groups across time and place in Pakistan and the effects on the incidence of terrorist attacks. He did this via a rather unexpected channel: the Zakat, a practice whereby Muslims make a charitable donation to the poor during the period of the Ramadan. Unfortunately, lack of oversight and the fact that many extremist groups have a legal charity branch imply that some of these funds end up in the hands of terrorists.

In the same period, the Pakistani government collects, from Sunni Muslims, a Zakat levy (to be used in aid to the vulnerable population after Ramadan) equal to 2.5% of individual bank deposits above a certain threshold. Such a threshold corresponds to the price of 612.32 grams of silver. Therefore, when the price of silver is higher, a smaller part of the deposits is levied, and people have more money to donate in the Zakat. Indeed, Limodio finds that a higher price of silver leads to more donations. Thus, changes in the price of silver affect how much funding goes to terrorist organizations and allows us to observe how funding affects the decisions of terrorist groups to launch attacks.

Prof. Limodio finds that more funding driven by higher prices of silver leads to more terrorist attacks in cities with a Sunni majority (the group that is subject to the levy on deposits). Terrorist attacks are thus sensitive to funding: if a terrorist group receives more funds in a given city, it will increase attacks in this city. And this happens only for capital-intense terrorist activities such as bombs and heavily armed assaults. Terrorist events with low financing are not responsive to variations in funding.

Additionally, Prof. Limodio uses AI to obtain measures of terrorist recruiting in online forums and using this measure, he finds that in periods of strong terrorist recruitment, the effect of additional funding on attacks is even stronger.

These results give us an important insight about the role and importance of financing in terrorist organizations. If such organizations had no constraints in moving funds across time and space, more funding in a given place wouldn’t necessarily lead to more attacks there. Thus, Prof. Limodio’s research provides evidence that terrorist organizations are indeed limited in their ability to move funds. As Limodio mentions “showing the existence of financial frictions through data is crucial to understand the behaviour of terrorist groups and study the most effective policies to empower financial counterterror to lower attacks and casualties”.