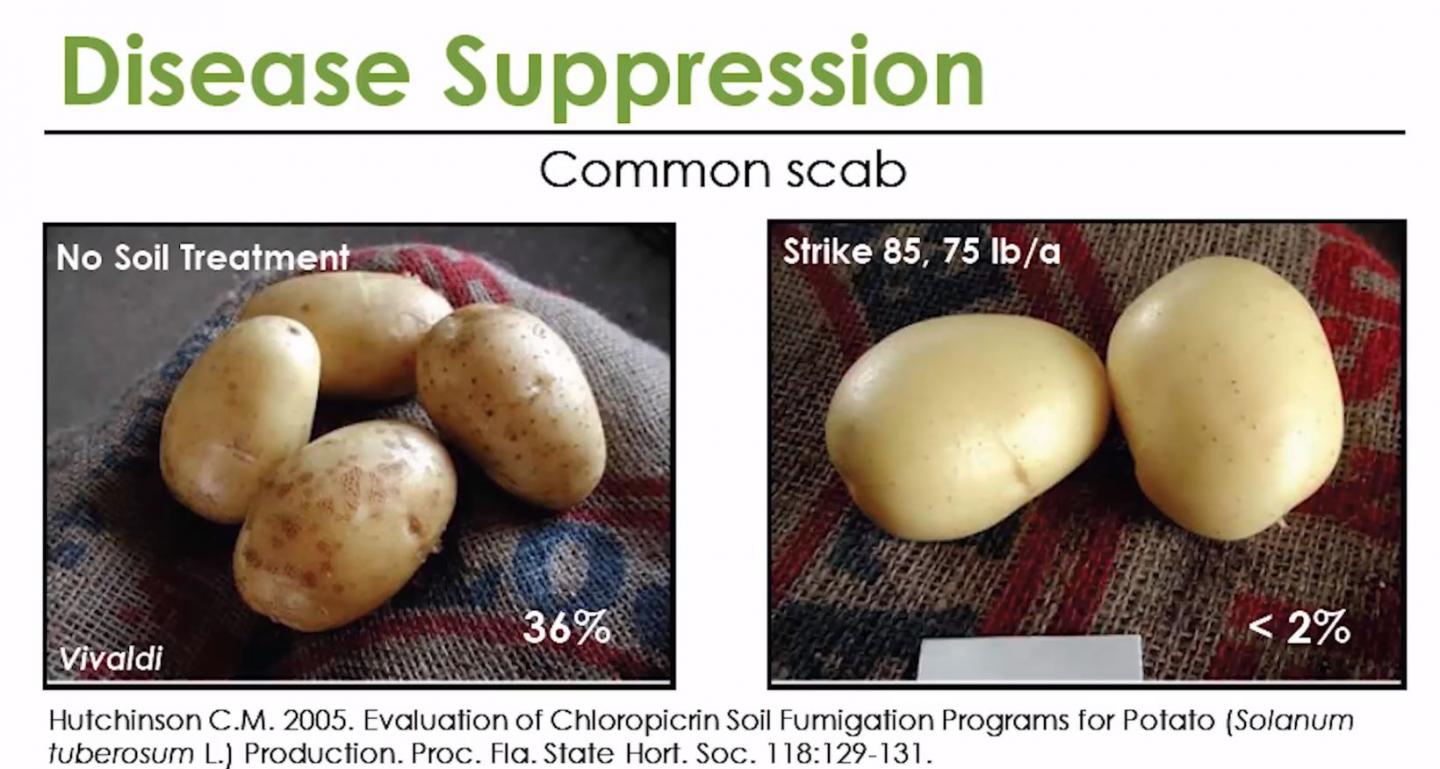 St. Paul, MN (May, 2019)–The chemical compound chloropicrin was first synthesized in 1848 by Scottish chemist John Stenhouse and first applied to agriculture in 1920, when it was used to cure tomato “soil sickness.” Over the next decade, it was used to restore pineapple productivity in Hawaii and to address soil fungal problems in California. Over time, it began to be widely used as a fungicide, herbicide, insecticide, and nematicide.

Chloropicrin was first used on potato in 1940 as a wireworm suppressant and then in 1965 as a verticillium suppressant. Farmers stopped using it on potato for many years, but over the last decade, it has seen a resurgence in popularity–and for good reason, according to Chad Hutchinson, director of research at TriEst Ag Group, Inc., in his webcast “Chloropicrin Soil Fumigation in Potato Production Systems.”

Used as a preplant soil treatment measure, chloropicrin suppresses soilborne pathogenic fungi and some nematodes and insects. With a half-life of hours to days, it is completely digested by soil organisms before the crop is planted, making it safe and efficient. Contrary to popular belief, chloropicrin does not sterilize soil and does not deplete the ozone layer, as the compound is destroyed by sunlight. Additionally, chloropicrin has never been found in groundwater, due to its low solubility.

According to Hutchinson, chloropicrin-treated soil has a healthier root system, improved water use, and more efficient fertilizer use. Applying chloropicrin to soil also results in greater crop yield and health. Hutchinson also comments on the compound’s ability to suppress many common pathogens, including the pathogen that causes common scab and species of Verticillium, Fusarium, and Phytophthora.

Hutchinson concludes that the use of chloropicrin not only increases production efficiency and profit potential for potato farmers, but it can also improve soil health, “the foundation of a positive crop production system.” His presentation “Chloropicrin Soil Fumigation in Potato Production Systems” is fully open access and available online.

This webcast, sponsored by TriEst, is part of the “Focus on Potato” series on the Plant Management Network (PMN). PMN is a cooperative, not-for-profit resource for the applied agricultural and horticultural sciences. Together with more than 80 partners, which include land-grant universities, scientific societies, and agribusinesses, PMN publishes quality, applied, and science-based information for practitioners.

Scienmag Oct 15, 2019
A new study shows medication, not surgery, can be a successful therapeutic option for severe chronic rhinosinusitis…

Acceptance and commitment therapy may ease fear of recurrence in…