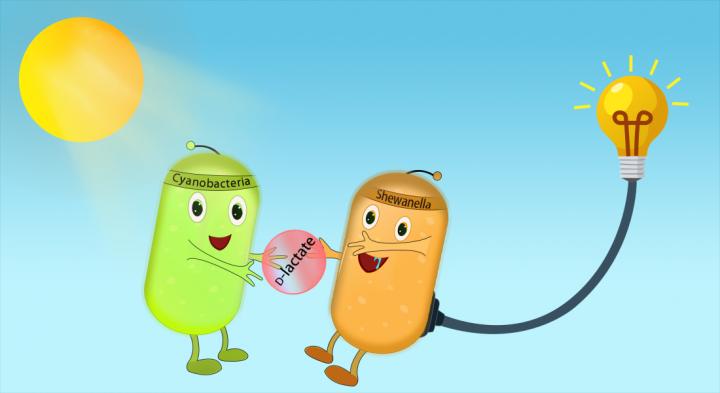 Researchers from the Institute of Microbiology of the Chinese Academy of Sciences have reported a novel biophotovoltaics (BPV) system based on a synthetic microbial consortium with constrained electron flow. This BPV system can stably operate for more than 40 days, setting a new BPV longevity milestone, according to a recent article in Nature Communications.

However, the power densities of BPV systems reported to date have been low, since photosynthetic microorganisms have a weak capacity to transfer electrons outside cells. To circumvent this problem, researchers have created a two-species microbial consortium.

In this microbial consortium, cyanobacteria capture solar energy and fix CO2 to synthesize D-lactate, while Shewanella produce electricity by oxidizing D-lactate, thus creating a constrained electron flow from photons to D-lactate, then to electricity.

Through genetic manipulation, as well as manipulation of the growth medium and device, the two very different microorganisms are able to work together effectively. This BPV system generates a power density of 150 mW·m-2 in a temporal separation setup, which is approximately one order of magnitude greater than mediator-less BPV devices with conventional configurations.

The researchers further demonstrated that this BPV system can stably operate for more than 40 days at an average power density of 135 mWm-2 in a spatial-temporal separation setup with medium replenishment. This represents the greatest longevity and power output per device of any BPV system reported to date.

The study, entitled “Development of a longevous two-species biophotovoltaics with constrained electron flow,” is the first report of a BPV system using a synthetic microbial consortium. Research was supported by the Key Research Program of the Chinese Academy of Sciences.

Scienmag Nov 6, 2019
Even within the limits established by the European Union, particulate matter is associated with a decrease in the…

Building a brighter way for capturing cancer during surgery