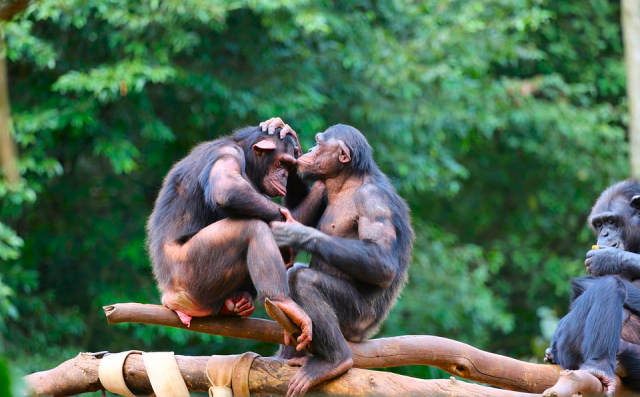 When given a choice between cooperating or competing, chimpanzees choose to cooperate five times more frequently Yerkes National Primate Research Center researchers have found. This, the researchers say, challenges the perceptions humans are unique in our ability to cooperate and chimpanzees are overly competitive, and suggests the roots of human cooperation are shared with other primates. The study results are reported in this week’s early online edition of the Proceedings of the National Academy of Sciences.

To determine if chimpanzees possess the same ability humans have to overcome competition, the researchers set up a cooperative task that closely mimicked chimpanzee natural conditions, for example, providing the 11 great apes that participated in this study with an open choice to select cooperation partners and giving them plenty of ways to compete. Working beside the chimpanzees’ grassy outdoor enclosure at the Yerkes Research Center Field Station, the researchers gave the great apes thousands of opportunities to pull cooperatively at an apparatus filled with rewards. In half of the test sessions, two chimpanzees needed to participate to succeed, and in the other half, three chimpanzees were needed.

While the set up provided ample opportunities for competition, aggression and freeloading, the chimpanzees overwhelmingly performed cooperative acts – 3,565 times across 94 hour-long test sessions.

The chimpanzees used a variety of enforcement strategies to overcome competition, displacement and freeloading, which the researchers measured by attempted thefts of rewards. These strategies included the chimpanzees directly protesting against others, refusing to work in the presence of a freeloader, which supports avoidance as an important component in managing competitive tendencies, and more dominant chimpanzees intervening to help others against freeloaders. Such third-party punishment occurred 14 times, primarily in response to aggression between the freeloader and the chimpanzee that was cooperatively working with others for the rewards.

“Previous statements in the literature describe human cooperation as a ‘huge anomaly’ and chimpanzees as preferring competition over collaboration,” says Malini Suchak, PhD, lead author of the study. “Studies have also suggested researchers have to ‘engineer cooperation’ during experiments rather than acknowledging chimpanzees are naturally cooperative. When we considered chimpanzees’ natural behaviors, we thought surely they must be able to manage competition on their own, so we gave them the freedom to employ their own enforcement strategies. And it turns out, they are really quite good at preventing competition and favoring cooperation. In fact, given the ratio of conflict to cooperation is quite similar in humans and chimpanzees, our study shows striking similarities across species and gives another insight into human evolution,” she continues. Suchak was a graduate student at the Yerkes Research Center at the time of the study and is now an Assistant Professor of Animal Behavior, Ecology and Conservation at Canisius College in Buffalo, NY.

Frans de Waal, PhD, director of the Living Links Center at the Yerkes Research Center, a C. H. Candler Professor of Psychology at Emory University and one of the study authors, adds, “It has become a popular claim in the literature that human cooperation is unique. This is especially curious because the best ideas we have about the evolution of cooperation come straight from animal studies. The natural world is full of cooperation, from ants to killer whales. Our study is the first to show that our closest relatives know very well how to discourage competition and freeloading. Cooperation wins!”

In the fields of microbiology and immunology, infectious diseases, pharmacology and drug discovery, transplantation, neurologic and psychiatric diseases, as well as behavioral, cognitive and developmental neuroscience, Yerkes scientists use innovative experimental models and cutting-edge technologies to explore and test transformative concepts aimed at: preventing and treating viral diseases such as AIDS; designing novel vaccines for infectious diseases such as malaria and tuberculosis; enhancing the potential of organ transplantation and regenerative medicine; discovering new drugs and drug classes through high-throughput screening; defining the basic neurobiology and genetics of social behavior and developing new therapies for disorders such as autism and drug addiction; understanding the biology of neurodegenerative diseases, such as Alzheimer’s and Parkinson’s diseases; and advancing knowledge about the evolutionary links between biology and behavior.