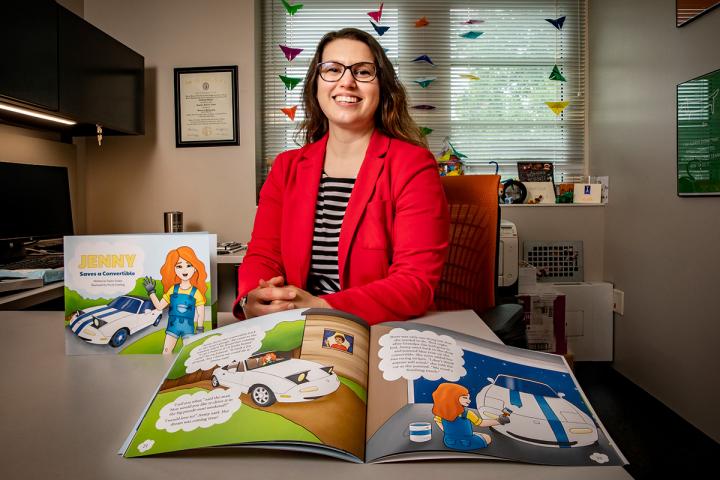 CHAMPAIGN, Ill. — A new book written and illustrated by two recent alumnae of the University of Illinois Urbana-Champaign introduces third graders to the nuts and bolts of automotive mechanics and engineering.

“Jenny Saves a Convertible” is the first book written and illustrated by U. of I. students to be published through a project with Illinois Engineering Ambassadors, a public outreach and professional development group for students in the Grainger College of Engineering.

The group reaches more than 1,000 schoolchildren each year, providing high-quality educational events and hands-on activities on the U. of I. campus and in elementary and secondary schools in the Champaign and Chicago areas.

Bioengineering professor Jennifer Amos, who co-founded and co-directs the group, said she intends for “Jenny” to be the inaugural volume in a series of children’s books that will pique young people’s interest in science, technology, engineering and mathematics.

“The book project started as a way to enhance the outreach that we’re doing in schools and get kids excited before we visit,” Amos said.

Amos raised the funds for the University of Illinois Press to publish 100 copies of “Jenny” and other stories written by engineering students who participate in the project. The “Jenny” book will be provided to schoolteachers this fall to read with their students and will complement learning activities led by Illinois Engineering Ambassadors during classroom visits or virtually.

Alumna Taylor Tucker is the author of “Jenny Saves a Convertible.”

The author, Taylor Tucker of Winnetka, Illinois, who graduated in May with a master’s degree in curriculum and instruction and also earned a bachelor’s degree in engineering mechanics in 2017, said writing the book fulfilled a longtime aspiration.

“I’ve always loved to write in any form, and I had thought several years ago about doing a children’s book because I wanted to reach that young audience somehow,” Tucker said. “But I knew I would need a good illustrator and the right opportunity to make something like that happen. I put that in the back of my mind and decided, when the time is right, I will do this.”

Opportunity knocked in 2019 when Amos discussed her book project idea at a meeting. Undergraduate students in engineering and graphic design would write and illustrate children’s stories with STEM themes for credit toward their degrees.

In “Jenny Saves a Convertible,” a young girl dreams of refurbishing her own car as she helps her grandfather in his auto repair shop. While Jenny and her grandfather work, they discuss how internal combustion engines operate, and by the end of the tale, Jenny has gained enough knowledge that she fixes up a convertible by herself and drives it in a parade.

While the story is fictional and employs bits of “magical realism,” Tucker said it was inspired by her family’s interest in cars.

Author Taylor Tucker, who based the story on her family’s interest in cars, hopes the character’s adventures will spark girls’ curiosity about how objects operate and empower them to create design improvements.

The story also involves female empowerment, another theme inspired by Tucker’s family. Her grandfather, an automotive engineer, and her grandmother encouraged Tucker’s mother and her three sisters to be independent and transcend societal gender expectations of the time.

Tucker said she hopes the story will spark girls’ curiosity about how objects work and empower them to think about design improvements they could make if they were to become engineers.

Tucker wrote “Jenny” during her first year in the College of Education’s Digital Environments for Learning, Teaching and Agency graduate program. Nicole Dowling of Louisville, Kentucky, her partner on the project and a senior at the time, created the illustrations for credit toward a bachelor’s degree in graphic design. She graduated in 2020.

Tucker will participate in future school visits with Illinois Engineering Ambassadors when she returns to the U. of I. in 2022 for a doctoral program in engineering.

Amos said learning how to explain their work to younger people benefits the engineering students too – something that Amos discovered when she taught seventh graders twice a week during graduate school.

“Being able to explain the research I was doing to my students changed the way I thought about it, and helped me focus on the impact and stay motivated,” she said.

“The engineering students who wrote the books had that same experience. Communicating what they do to younger people makes them better engineers.”

To make the “Jenny” book more broadly available, Tucker and Dowling also self-published it through Amazon and recently made it available in digital form. The two women found their collaboration on the book so rewarding that they decided to embark on a second book project on their own, Tucker said.

“The story uses weather science and a child’s fear of thunderstorms to teach methods for coping with anxiety, such as taking deep breaths to calm down,” Tucker said.

Amos is finalizing a second book in conjunction with Illinois Engineering Ambassadors that she expects to publish in the fall. Written by engineering alumna Samantha Park and illustrated by graphic design alumna Felicia Phillips, the story introduces children to computer science through the experiences of two girls who are curious about cellphone apps.

Even when schools allow in-person visits to resume, the group may continue providing some activities virtually to reach greater numbers of children. Accordingly, the group is working on a set of YouTube videos and creating a STEM-themed coloring book for very young children to broaden its audience, she said.