A paper published in the journal Psychological Medicine confirms the existence of neurobiological alterations in early stages of life in minors exposed to maltreatment. The study’s first author is the researcher Laia Marqués-Feixa, from the Faculty of Biology, the Institute of Biomedicine of the University of Barcelona (IBUB) and the CIBER Mental Health (CIBERSAM), and it has been carried out in collaboration with the CIBERSAM EPI-Young Stress Group. 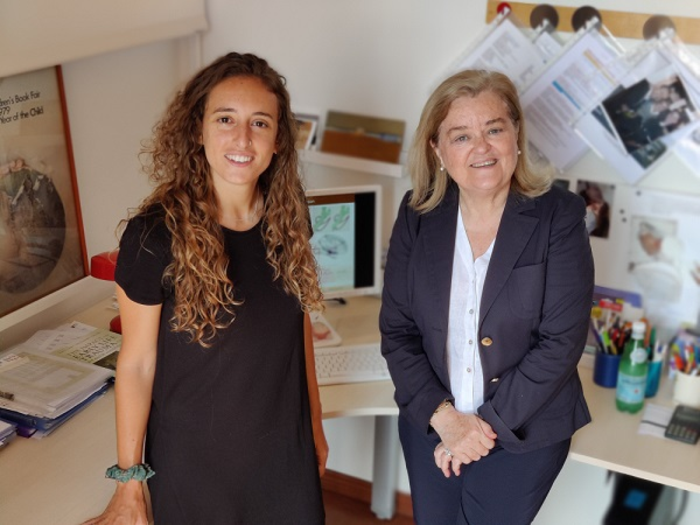 A paper published in the journal Psychological Medicine confirms the existence of neurobiological alterations in early stages of life in minors exposed to maltreatment. The study’s first author is the researcher Laia Marqués-Feixa, from the Faculty of Biology, the Institute of Biomedicine of the University of Barcelona (IBUB) and the CIBER Mental Health (CIBERSAM), and it has been carried out in collaboration with the CIBERSAM EPI-Young Stress Group.

“Those children and adolescents who have suffered child maltreatment by adults show alterations, in early stages of life, in the hypothalamic-pituitary-adrenal axis (HPA), one of the main biological mechanisms of stress regulation”, notes Laia Marques, member of the Research Group on Genes, Environment and Youth Development led by Professor Lourdes Fañanás Saura, from the Department of Evolutionary Biology, Ecology and Environmental Sciences of the Faculty of Biology of the UB. “Moreover –she adds–, we have observed a dose-response relationship, so that those children that have suffered serious maltreatment experiences show higher alterations in the functioning of this axis”.

Unlike other studies, this one also includes the frequency of exposure to maltreatment as a risk variable that needs to be considered. The study shows that, in those subjects who had been exposed to child maltreatment for a longer period of time, there was greater dysfunction in the HPA axis, regardless of the severity of the experiences they had suffered.

Experiences of maltreatment during childhood have traditionally been related to the development of mental disorders, both in the beginning of life and during adulthood. Likewise, those with a psychiatric diagnosis who report having suffered maltreatment during childhood build a clinically different subtype of patients with a worse prognosis. Specifically, they tend to have an earlier onset of mental disorder, more severe symptomatology, greater comorbidity, poorer response to psychological and pharmacological treatment, as well as more suicidal attempts and longer periods of hospitalisation.

“Previous research in adults shows a clear dose-response relationship between adverse experiences and the risk of mental disorder,” says Lourdes Fañanás Saura, principal researcher at the CIBERSAM Research Group. “However, studies in the child and youth population are scarcer and are only focused on the most severe cases, with children under the care of child protection services”. Moreover, the neurobiological mechanisms underlying this association remain largely undescribed.

The researchers note that “children and adolescents with a history of maltreatment express higher levels of anxiety and show hyperactivation in the basal daytime functioning of the HPA axis, with high cortisol levels at night”. Hypercortisolism is a well-known risk factor and, according to the authors, “could lead to hyperactivation of the vigilance state in these children and adolescents, causing dysfunctions in the sleep-wake cycle, among other effects”.

Children and adolescents with and without mental disorders, exposed and not exposed to child maltreatment, participated in this study. The participants were studied using the Trier social stress test for children (TSST-C), an acute stress test that explores the reactivity of the HPA axis to psychosocial stress. The researchers of UB and CIBERSAM say that “while participants without a history of maltreatment (with or without psychopathology) showed an increase in cortisol levels after the acute stressor (as expected), children and adolescents with a history of maltreatment showed a flattened and hyper-reactive HPA axis to the stressor”.

However, these children had high levels of anxiety, showing a clear dissociation between their subjective perception of stress and their biological response. “This lack of plasticity in biological systems could have important clinical implications that would hinder the ability to manage and activate internal processes to cope with future stressful situations in an optimal way and constitute a risk factor for developing behavioural disorders or different psychopathologies”, the researchers conclude.

A global health problem that should be considered in clinical records

Child maltreatment is a recognised global health problem that is also associated with many other medical problems. Experiences of maltreatment should be considered in the medical records of patients, especially in children and adolescents exposed to complex trauma, as this would explain key aspects of the response to the treatment and the course of the disease. Early detection and prevention of child maltreatment should be an objective in education and health systems, as well as a concern of society.

This study is part of a project funded by the Carlos III Health Institute and led by Professor Lourdes Fañanás Saura, from the University of Barcelona. It has been developed in collaboration with researchers from six units of child and adolescent psychiatry. Specifically, those of the Complejo Asistencial Benito Menni (Sant Boi del Llobregat), the Hospital Clínic de Barcelona, the University Hospital Gregorio Marañón (Madrid), the University Hospital Puerta de Hierro (Majadahonda), the Hospital Universitario de Araba – Santiago Apóstol (Vitoria) and the Day Hospital for Adolescents in Gavà, from the Orienta Foundation.