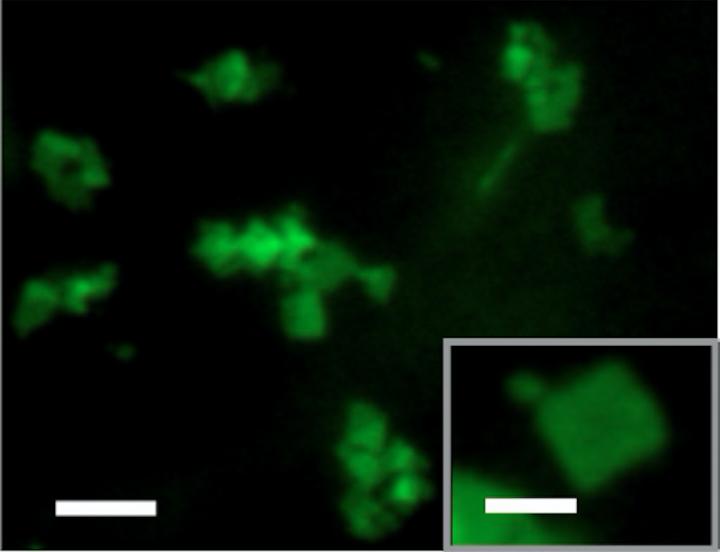 Chemists have developed a nanomaterial that they can trigger to shape shift — from flat sheets to tubes and back to sheets again — in a controllable fashion. The Journal of the American Chemical Society published a description of the nanomaterial, which was developed at Emory University and holds potential for a range of biomedical applications, from controlled-release drug delivery to tissue engineering.

The nanomaterial, which in sheet form is 10,000 times thinner than the width of a human hair, is made of synthetic collagen. Naturally occurring collagen is the most abundant protein in humans, making the new material intrinsically biocompatible.

“No one has previously made collagen with the shape-shifting properties of our nanomaterial,” says Vincent Conticello, senior author of the finding and Emory professor of biomolecular chemistry. “We can convert it from sheets to tubes and back simply by varying the pH, or acid concentration, in its environment.”

The Emory Office of Technology Transfer has applied for a provisional patent for the nanomaterial.

First authors of the finding are Andrea Merg, a former post-doctoral fellow in the Conticello lab who is now at the University of California Merced, and Gavin Touponse, who did the work as an Emory undergraduate and is now in medical school at Stanford. The work was a collaboration between Emory and scientists from the Argonne National Laboratory, the Paul Scherrer Institute in Villigen, Switzerland, and the Center for Cellular Imaging and NanoAnalytics at the University of Basel.

Collagen is the main structural protein in the body’s connective tissue, such as cartilage, bones, tendons, ligaments and skin. It is also abundant in blood vessels, the gut, muscles and in other parts of the body.

Collagen taken from other mammals, such as pigs, is sometimes used for wound healing and other medical applications in humans. Conticello’s lab is one of only about a few dozen around the world focused on developing synthetic collagen suitable for applications in biomedicine and other complex technologies. Such synthetic “designer” biomaterials can be controlled in ways that natural collagen cannot.

“As far back as 30 years ago, it became possible to control the sequence of collagen,” Conticello says. “The field has really picked up steam, however, during the past 15 years due to advances in crystallography and electron microscopy, which allows us to better analyze structures at the nano-scale.”

The development of the new shape-shifting nanomaterial at Emory was “a fortuitous accident,” Conticello says. “There was an element of luck to it and an element of design.”

The collagen protein is composed of a triple helix of fibers that wrap around one another like a three-stranded rope. The strands are not flexible, they’re stiff like pencils, and they pack together tightly in a crystalline array.

The Conticello lab has been working with collagen sheets that it developed for a decade. “A sheet is one large, two-dimensional crystal, but because of the way the peptides pack it’s like a whole bunch of pencils bundled together,” Conticello explains. “Half the pencils in the bundle have their leads pointing up and the other half have their eraser-end pointing up.”

Conticello wanted to try to refine the collagen sheets so that each side would be limited to one functionality. To take the pencil analogy further, one surface of the sheet would be all lead points and the other surface would be all erasers. The ultimate goal was to develop collagen sheets that could be integrated with a medical device by making one surface compatible with the device and the other surface compatible with functional proteins in the body.

When the researchers engineered these separate types of surfaces into single collagen sheets, however, they were surprised to learn that it caused the sheets to curl up like scrolls. They then found that the shape-shifting transition was reversible — they could control whether a sheet was flat or scrolled simply by changing the pH of the solution it was in. They also demonstrated that they could tune the sheets to shape shift at particular pH levels in a way that could be controlled at the molecular level through design.

“It’s particularly interesting that the condition around which the transition occurs is a physiological condition,” Conticello says. “That opens the potential to find a way to load a therapeutic into a collagen tube under controlled, laboratory conditions. The collagen tube could then be tuned to unfurl and release the drug molecules it contains after it enters the pH environment of a human cell.”

Co-authors from the Paul Scherrer Institute helped characterize the three-dimensional structure of the crystalline assemblies and further analyze the nanomaterial. They include Jan Pieter Abrahams, Thorsten Blum and Eric van Genderen. Xiaobing Zuo from the Argonne National Laboratory also contributed as a co-author of the project.