Danish schoolchildren and their teachers are working in an unknown cocktail of chemical substances during school hours. A new mapping of the chemicals in classrooms has found more than 450 different volatile organic compounds (VOCs) in the air. Many of these contribute to poor air in classrooms. 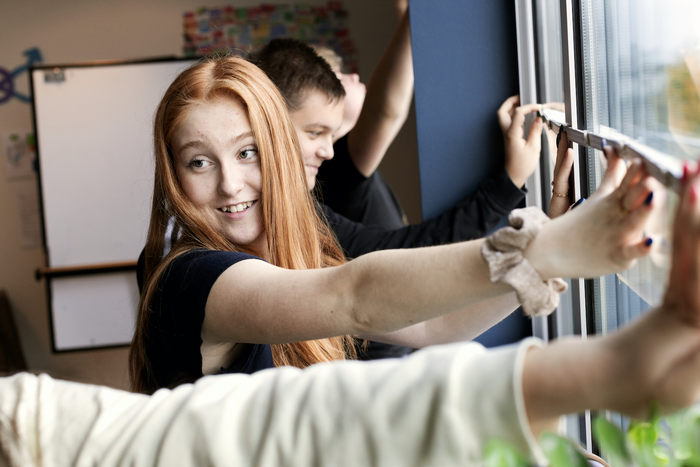 Danish schoolchildren and their teachers are working in an unknown cocktail of chemical substances during school hours. A new mapping of the chemicals in classrooms has found more than 450 different volatile organic compounds (VOCs) in the air. Many of these contribute to poor air in classrooms.

The chemical substances primarily come from the pupils themselves; sweat, exhaled air, perfume, deodorant, and not least from hand sanitizer and from eating packed lunches during breaks. However, the actual rooms themselves, and their contents, also add to the chemicals in the air. The substances have names like butanoic acid, toluene and acetaldehyde. 15 per cent of the most frequently occurring substances are potentially harmful.

“Everything indicates that we’re facing a challenge with the indoor climate in Danish primary and lower secondary schools. CO2 levels are high, and we have also found high concentrations of chemical substances in the air,” says Assistant Professor Kasper Vita Kristensen from the Department of Biological and Chemical Engineering at Aarhus University.

This is the first extensive examination of how much and what type of chemicals children and young people are exposed to in the air in Danish classrooms. This includes substances that smell and cause discomfort, and substances that are rarely noticed.

The study, called Chemicals in the Air (Kemi i luften) is part of the Danish research project Mass Experiment (Masseeksperimentet) and was conducted in 76 different classrooms in schools all over Denmark, at the same time as CO2 levels was studied during the Mass Experiment in 2021. The study was organised by the National Center for Science Education (ASTRA) and the Department of Biological and Chemical Engineering at Aarhus University. The study, Chemicals in the Air, is being funded by the philanthropic association Realdania and the VILLUM FOUNDATION.

The pupils in the 76 participating classes set up sensors in their classrooms to measure the total amount of chemicals in the air every ten minutes for four weeks. The results were sent for analysis by the researchers, and they show that 96 per cent of the classes experienced concentrations of chemical substances above the recommended maximum level, although there was considerable local variation. Half of the classes had concentrations above the recommended maximum for one hour every day.

According to Kasper Vita Kristensen, the mapping shows that there is a need for much more research in the area.

“As yet, we know very little about the so-called cocktail effect when chemical substances are mixed together. Neither do we know much about how chemicals affect well-being and health, particularly among the children and young people who are in the rooms: often for very long periods at a time,” he says.

Furthermore, Denmark still has no recommendations for the maximum number of chemical substances permitted in the air in classrooms. The recommendations stated therefore come from the German health authorities.

On the other hand, the Danish Working Environment Authority (WEA) has general threshold values for individual chemicals. The good news is that none of the potentially harmful substances found in the study exceeded these threshold values from WEA.

“Ventilation is an effective way to remove heavy and bad-smelling air. But unfortunately, not all classes air-out sufficiently, and with the current energy crisis, with lowered classroom temperatures, mechanical ventilation may even be avoided, so the problem could quickly become more widespread,” says Kasper Vita Kristensen.

“I fear that levels will increase this winter and air quality will fall in many Danish classrooms,” he adds.

The air contains most chemicals in the afternoon when the pupils have been in the room for a long time. In particular, chemicals from the pupils’ packed lunches are in high concentrations on days with no airing-out. And the substances do not necessarily disappear when the pupils go home. There is a constant background level of chemical substances from gases emitted from the room itself, and cleaning also adds chemicals in the evening. If rooms are not aired-out or ventilated, many of the chemicals will stay in the air until the next morning.

Realdania has funded the study, and for several years the organisation has been working to improve the indoor climate in schools. Anne Gade Iversen, project manager at Realdania, says that the first steps have now been taken to learn more about which chemicals require action at schools and how.

“Measurements of CO2 levels have long pointed to insufficient ventilation in many Danish classrooms. The results of the Mass Experiment mean that we are now beginning to understand the consequences and hopefully we will increase focus on and knowledge about the many chemicals we experience when we are indoors,” says Anne Gade Iversen.

Pupils themselves have helped

Pupils in primary and lower secondary schools have themselves helped to harvest the results by setting up sensors and collecting air samples. They have supplied a large amount of valuable data on the chemicals in the air in their classrooms.

“An important aim of Mass Experiment is for the pupils to try their hand at authentic scientific research methods so they can see what they have to do. Therefore, we also developed tools to guide pupils in their own behaviour. This means ensuring good habits regarding airing-out classrooms,” says Lene Christensen, Master of Science and programme director for the Mass Experiment.

Within the next six months, the Chemicals in the Air study will be published at international level.

Mass Experiment 2021: Chemicals in the air in educational environments

Results of the Mass Experiment: