Cheaper carbon capture is on the way 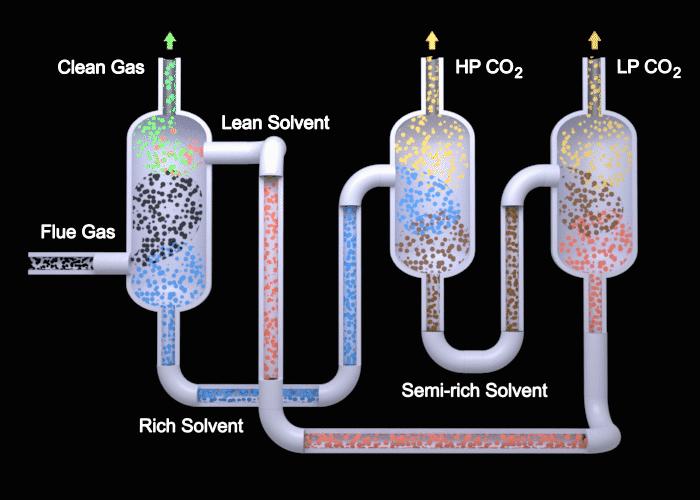 RICHLAND, Wash.–As part of a marathon research effort to lower the cost of carbon capture, chemists have now demonstrated a method to seize carbon dioxide (CO2) that reduces costs by 19 percent compared to current commercial technology. The new technology requires 17 percent less energy to accomplish the same task as its commercial counterparts, surpassing barriers that have kept other forms of carbon capture from widespread industrial use. And it can be easily applied in existing capture systems.

In a study published in the March 2021 edition of International Journal of Greenhouse Gas Control, researchers from the U.S. Department of Energy’s Pacific Northwest National Laboratory–along with collaborators from Fluor Corp. and the Electric Power Research Institute–describe properties of the solvent, known as EEMPA, that allow it to sidestep the energetically expensive demands incurred by traditional solvents.

“EEMPA has some promising qualities,” said chemical engineer Yuan Jiang, lead author of the study. “It can capture carbon dioxide without high water content, so it’s water-lean, and it’s much less viscous than other water-lean solvents.”

Current atmospheric CO2 levels have soared higher in recent years than at any point within the last 800,000 years, as a new record high of 409.8 parts per million was struck in 2019. CO2 is primarily released through human activities like fossil fuel combustion, and today’s atmospheric concentrations exceed pre-industrial levels by 47 percent.

At a cost of $400-$500 million per unit, commercial technology can capture carbon at roughly $58.30 per metric ton of CO2, according to a DOE analysis. EEMPA, according to Jiang’s study, can absorb CO2 from power plant flue gas and later release it as pure CO2 for as little as $47.10 per metric ton, offering an additional technology option for power plant operators to capture their CO2.

Jiang’s study described seven processes that power plants can adopt when using EEMPA, ranging from simple setups similar to those described in 1930s technology, to multi-stage configurations of greater complexity. Jiang modeled the energy and material costs to run such processes in a 550-megawatt coal power plant, finding that each method coalesces near the $47.10 per metric ton mark.

One of the first known patents for solvent-based carbon capture technology cropped up in 1930, filed by Robert Bottoms.

“I kid you not,” said green chemist David Heldebrant, coauthor of the new study. “Ninety-one years ago, Bottoms used almost the same process design and chemistry to address what we now know as a 21st century problem.”

The chemical process for extracting CO2 from post-combustion gas remains largely unchanged: water-rich amines mix with flue gas, absorb CO2 and are later stripped of the gas, which is then compressed and stored. But aqueous amines have limitations. Because they’re water-rich, they must be boiled at high temperatures to remove CO2 and then cooled before they can be reused, driving costs upward.

“We wanted to hit it from the other side and ask, why are we not using 21st century chemistry for this?” Heldebrant said. So, in 2009, he and his colleagues began designing water-lean solvents as an alternative. The first few solvents were too viscous to be usable.

“‘Look,'” he recalled industry partners saying, “‘your solvent is freezing and turning into glass. We can’t work with this.’ So, we said, OK. Challenge accepted.”

Over the next decade, the PNNL team refined the solvent’s chemistry with the explicit aim to overcome the “viscosity barrier.” The key, it turned out, was to use molecules that aligned in a way that promoted internal hydrogen bonding, leaving fewer hydrogen atoms to interact with neighboring molecules.

Heldebrant draws a comparison to children running through a ball pit: if two kids hold each other’s hands while passing through, they move slowly. But if they hold their own hands instead, they pass as two smaller, faster-moving objects. Internal hydrogen bonding also leaves fewer hydrogen atoms to interact with overall, akin to removing balls from the pit.

Where the team’s solvent was once viscous like honey, it now flowed like water from the kettle. EEMPA is 99 percent less viscous than PNNL’s previous water-lean formulations, now nearly on par with commercial solvents, allowing them to be utilized in existing infrastructure, which is largely built from steel. Pivoting to plastic in place of steel, the team found, can further reduce equipment costs.

Steel is expensive to produce, costly to ship and tends to corrode over time in contact with solvents. At one tenth the weight, substituting plastic for steel can drive the overall cost down another $5 per metric ton, according to a study led by Jiang in 2019.

Pairing with plastic offers another advantage to EEMPA, whose reactive surface area is boosted in plastic systems. Because traditional aqueous amines can’t “wet” plastic as well (think of water beading on Teflon), this advantage is unique to the new solvent.

The PNNL team plans to produce 4,000 gallons of EEMPA in 2022 to analyze at a 0.5-megawatt scale inside testing facilities at the National Carbon Capture Center in Shelby County, Alabama, in a project led by the Electric Power Research Institute in partnership with Research Triangle Institute International. They will continue testing at increasing scales and further refine the solvent’s chemistry, with the aim to reach the U.S. Department of Energy’s goal of deploying commercially available technology that can capture CO2 at a cost of $30 per metric ton by 2035.

This study, “Techno-economic comparison of various process configurations for post-combustion carbon capture using a single-component water-lean solvent,” was funded by the U.S. Department of Energy Office of Fossil Energy.

Pacific Northwest National Laboratory draws on its distinguishing strengths in chemistry, Earth sciences, biology and data science to advance scientific knowledge and address challenges in sustainable energy and national security. Founded in 1965, PNNL is operated by Battelle for the U.S. Department of Energy’s Office of Science, which is the single largest supporter of basic research in the physical sciences in the United States. DOE’s Office of Science is working to address some of the most pressing challenges of our time. For more information, visit PNNL’s News Center. Follow us on Twitter, Facebook, LinkedIn and Instagram.