Cheap but desirable: Generic drugs a great alternative to the brand-names for hypertension

For hypertension, generic drugs could be as good an option as brand-name drugs while costing only half as much, study suggests 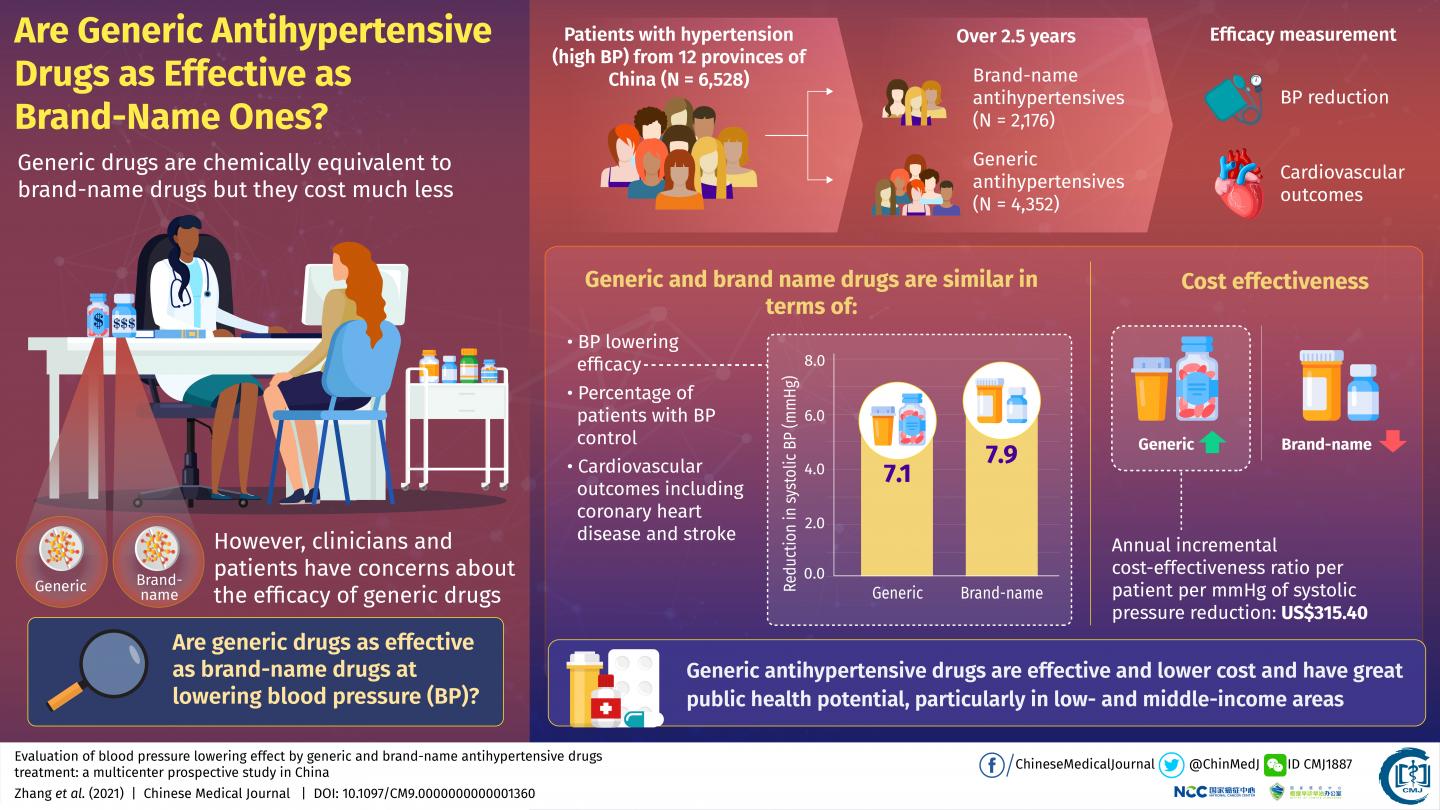 Hypertension is a common medical condition and a primary cause of cardiovascular diseases and stroke worldwide. Unfortunately, as Professor Wei-Li Zhang of the Chinese National Center for Cardiovascular Diseases notes, “the unaffordability of drugs is a major barrier to medication adherence among patients living in low- and middle-income areas.”

One of the countries where hypertension is becoming a major problem is China where, researchers estimate, between 244 million and 300 million adults are living with hypertension. But true to Prof. Zhang’s words, most cases of hypertension in China are not adequately controlled, and patients who do seek treatment for hypertension must pay for outpatient clinic visits and bear medication costs out-of-pocket.

An emerging option for controlling the costs of antihypertensive pharmacotherapy is to prescribe generic drugs, which have the same active ingredients as their brand-name counterparts but cost substantially less. Several countries have taken steps to encourage the prescription of generic drugs as a way of reducing healthcare spending and enabling more patients, but some clinicians have reservations about prescribing generics due to concerns that such drugs may not be as effective as their brand-name counterparts. A team of researchers led by Prof. Zhang therefore decided to conduct an investigation to determine whether generic antihypertensive drugs are as effective as brand-name drugs at controlling blood pressure over the long term. Their results appear in a paper recently published in Chinese Medical Journal.

In their study, they analyzed data from a cohort study of patients with hypertension conducted across 18 hospitals in 12 Chinese provinces. Baseline screenings occurred between 2013 and 2015, and follow-up assessments continued until August 1, 2017. The researchers focused on 2,176 study participants who used brand-name antihypertensive drugs and 4,352 participants who used generic drugs. They conducted statistical analyses to compare the two groups in terms of changes in blood pressure over the follow-up period.

However, some differences in outcomes did emerge when the researchers examined specific participant subgroups. Among participants who were younger than 60 years old, those who took brand-name drugs were more likely to achieve well-controlled blood pressure levels than their counterparts who took generic drugs were. A similar difference between brand-name drugs and generic drugs emerged when the investigators restricted their analyses to men with hypertension.

Despite the differences observed in the subgroup analyses, the results provide strong evidence overall for generic drugs being just as effective as brand-name ones at lowering blood pressure levels. Importantly, the generic drugs achieve these effects at a much lower cost; a 1-mmHg reduction in systolic blood pressure turned out to be US$315.40 cheaper with generic drugs than with brand-name ones. This cost difference means that treatment with generic drugs is only half as expensive as treatment with brand-name drugs, and this will doubtless mean a great deal to the many people in China and beyond who live on low-to-medium incomes.

That’s why Prof. Zhang expresses hope that these findings will provide “an impetus for physicians and patients to preferentially use generic drugs instead of expensive brand-name drugs to lower blood pressure levels.” By expanding access to antihypertensive treatment, the use of generic drugs will provide important benefits to public health within China and other developing countries.