Changing your mind based on information, or simply to conform? Brain activity differentiates between types of social influence

Researchers led by Ali Mahmoodi at the University of Freiburg in Germany have characterized brain activity that occurs when we are socially influenced to change our minds. Publishing in PLOS Biology on March 3rd, the study shows how the brain distinguishes between different types of social conformity when revising one’s opinions. 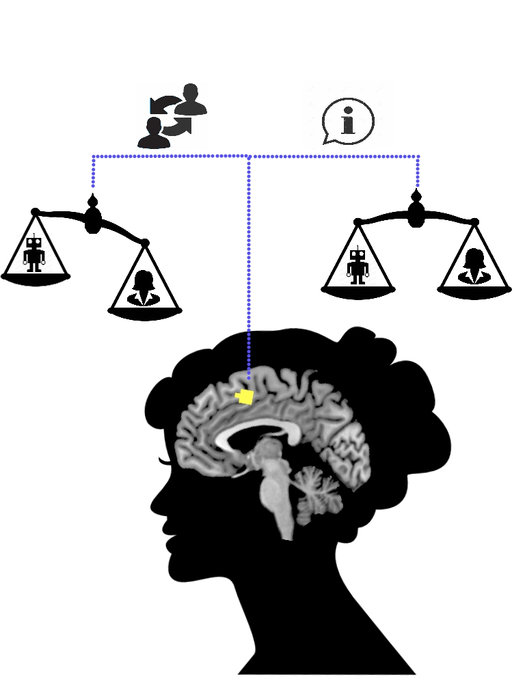 Researchers led by Ali Mahmoodi at the University of Freiburg in Germany have characterized brain activity that occurs when we are socially influenced to change our minds. Publishing in PLOS Biology on March 3rd, the study shows how the brain distinguishes between different types of social conformity when revising one’s opinions.

Changing one’s mind after learning additional information from another person is an example of informational social influence. On the other hand, if it’s because of the desire to be socially accepted, it’s an example of normative social influence. Until now, no study of the underlying brain mechanisms has differentiated between these two situations.

The current study used a computer-based game in which people tried to remember the location of a dot presented on the screen. The participants provided confidence ratings for their responses and were then allowed to revise their estimations after seeing a computer’s response or the response of a “partner” whom they had met before the experiment. In reality, all the responses were made by computers. Brain activity was measured using functional magnetic resonance imaging (fMRI) while people played the game.

People conformed more when their confidence was low, regardless of whether they thought their partner was human or not. This informational influence was tracked by activity in the dorsal anterior cingulate cortex (dACC) of the brain. The participants also conformed more when conformity was reciprocated by their partner. This normative influence only occurred when participants thought that their partners were human, as did the correlation with dACC activity. Additionally, normative influence, but not informational influence, was associated with stronger functional connections to the dACC from other social processing regions of the brain.

Reciprocal conformity is a behavior indicative of the desire for social acceptance, and understanding its neural basis is crucial when confronting instances of excessive conformity. Future studies should explore the limits of normative conformity with respect to non-human machines.

Mahmoodi adds, “Human dorsal anterior cingulate cortex tracks the weight of others’ opinion in social interaction. This brain signal treats advice from humans and from artificial intelligence similarly in matters of information. In matters of social norms such as reciprocity, however, this brain area gives no weight to AI.”

In your coverage, please use this URL to provide access to the freely available paper in PLOS Biology:   http://journals.plos.org/plosbiology/article?id=10.1371/journal.pbio.3001565

Funding: A.M. was supported by a PhD scholarship from the Graduate School Scholarship Program of the German Academic Exchange Service (DAAD). D.B. was supported by a Sir Henry Wellcome Postdoctoral Fellowship funded by the Wellcome Trust (213630/Z/18/Z). B.B. was supported by the Humboldt Foundation, the NOMIS Foundation, and the European Research Council under the European Union’s Horizon 2020 research and innovation programme (grant agreement No. 819040 – acronym: rid-O). The funders had no role in study design, data collection and analysis, decision to publish, or preparation of the manuscript.