Changing beliefs is critical to sustaining high levels of vaccination

The rise of the BA.2 Omicron variant — first in Europe and East Asia and now in the U.S. — makes it clear that the pandemic isn’t done with us, and it isn’t likely to be anytime soon — unless we achieve very high vaccination levels with recurring boosters. But so far, too few people are volunteering. In the U.S., for instance, less than a third of the population is boosted. 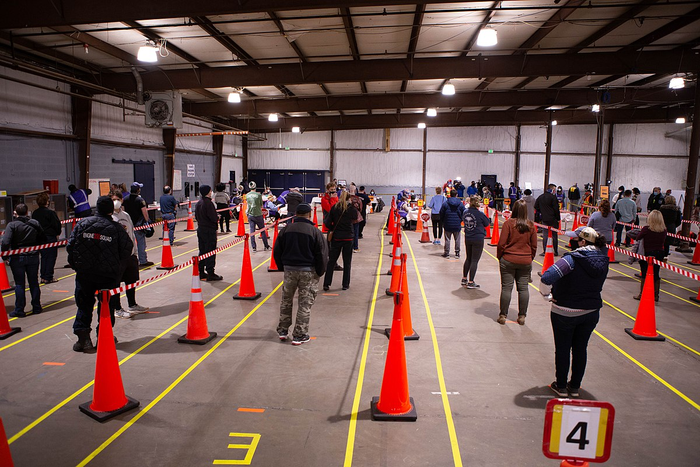 The rise of the BA.2 Omicron variant — first in Europe and East Asia and now in the U.S. — makes it clear that the pandemic isn’t done with us, and it isn’t likely to be anytime soon — unless we achieve very high vaccination levels with recurring boosters. But so far, too few people are volunteering. In the U.S., for instance, less than a third of the population is boosted.

Are vaccination mandates the answer? If so, how can they be effective, given the resistance they can stir up?

A new study in the Proceedings of the National Academy of Sciences by Santa Fe Institute researchers Katrin Schmelz and Samuel Bowles offers guidance. First, they put solid numbers to the resistance provoked by mandates. Without mandates, people’s opposition to vaccines was softer than one might guess; in a series of three surveys between April 2020 and May 2021 — coinciding with the first three pandemic waves — only 3.3 percent of people were consistently opposed to getting vaccinated if it is voluntary. But if vaccines are mandated, resistance quintupled, to 16.5 percent.

Second, Schmelz and Bowles found that, over time, many respondents switched from anti-vaccination to pro, even if vaccination was mandated. What convinced people to change? Those who became more willing to be vaccinated had become more convinced of the vaccines’ effectiveness, more trusting in public institutions, and less concerned that a mandate would compromise their freedom. Demographic factors like age, gender, and educational levels were irrelevant to who switched.

“What matters is how people think and what they believe. So, to increase and sustain vaccination rates, change people’s beliefs, and build trust,” says incoming Santa Fe Institute postdoctoral fellow Katrin Schmelz, a psychologist and economist at the University of Konstanz. “People have to feel that the guidance they’re getting from the government makes sense and is reliable. And it’s key to get the word out that the vaccines really work.”

“Looking beyond Covid,” said Bowles, an economist and professor at the Santa Fe Institute, “we might have to take on board that some of the standard tools of public policy — mandates — will backfire if they are experienced as a limit on a person’s freedom rather than a necessity for expanding the freedom of all to lead a more normal life in pandemic times.”

The study is based on a series of three surveys that were conducted on the same representative sample of just over 2,000 German residents. “Vaccination attitudes among Germans are not so different from Americans” remarks Bowles. “Opposition is widespread, vocal, organized and identified with political beliefs. It just does not line up with the major political parties like our Republican-Democrat split.” To assess the effects of different upbringing and cultures, the researchers looked at people who, like Schmelz, grew up under Communist Party rule in East Germany rather than in democratic West Germany. They found that there was little difference in the dynamics of their vaccination attitudes, suggesting that their results may be informative about a variety of cultures.

Despite the resistance they provoke, mandates may still be needed, the researchers say. They may even contribute to sustaining trust in public institutions, particularly if a still-worse variant emerges. “Failing to adopt aggressive policies against the pandemic when it is surging is not a way to win trust from the majority who are already vaccinated,” said Bowles.

With or without mandates, policymakers need to stay focused on building and maintaining trust. “Mandates do not cancel the need to change hearts and minds,” Schmelz says. “If mandates are implemented, then enforcement by governments and persuasion by trusted medical professionals should be deployed not as alternatives but as complements, each contributing synergistically to the effectiveness of the other.”

Opposition to voluntary and mandated Covid-19 vaccination as a dynamic process: Evidence and policy implications of changing beliefs

No conflict of interest.