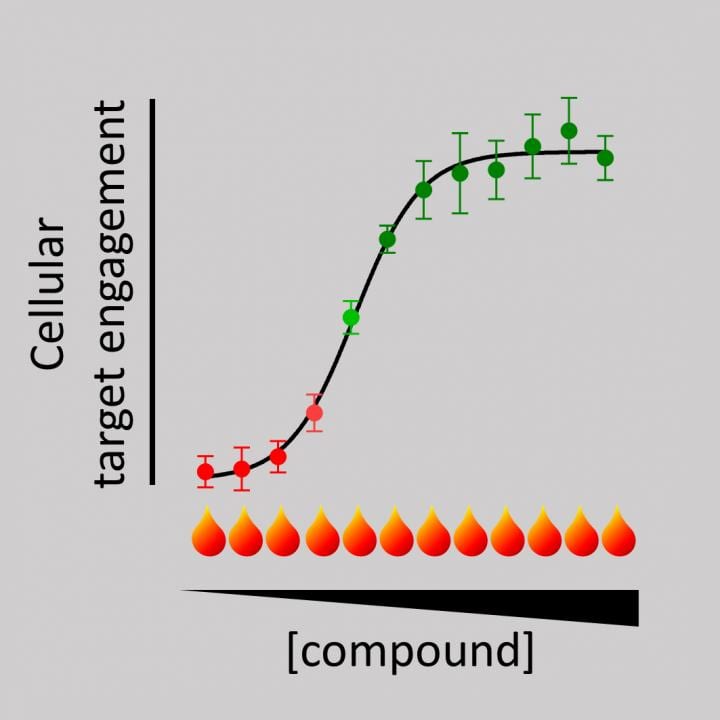 The CETSA is a technology that measures intracellular compound target engagement by quantifying changes in the thermal stability of the target protein in live cells. The technology has a number of advantages over alternative methods including the ability to detect binding to the intended target in cellular models without requiring any overexpression or tagging of the target protein, or any chemical modifications or probe compounds.

Novel CETSA HT assays are described for two important oncology targets, B-Raf and PARP1, and applied to both primary screening for hit identification and SAR screening for lead optimization. Comparisons are performed with conventional drug discovery assay technologies including a biochemical probe-displacement binding assay and a cellular imaging assay.

The findings demonstrate that CETSA HT shows good correlations to other assay formats, but can also highlight different compound responses that allow for a more thorough understanding of cellular effects. CETSA HT can be reliably applied throughout various stages of early drug discovery to quantify intracellular binding to the desired target, providing a better understanding of the action of small molecules which may help advance novel therapeutic drugs.

“Positioning High-Throughput CETSA in Early Drug Discovery through Screening against B-Raf and PARP1” can be accessed for free at https://journals.sagepub.com/doi/full/10.1177/2472555218813332. For more information about SLAS and its journals, visit http://www.slas.org/journals.

A PDF of this article is available to credentialed media outlets upon request. Contact jhronek@slas.org.

About our Society and Journals

SLAS (Society for Laboratory Automation and Screening) is an international community of nearly 20,000 professionals and students dedicated to life sciences discovery and technology. The SLAS mission is to bring together researchers in academia, industry and government to advance life sciences discovery and technology via education, knowledge exchange and global community building.

An energy-efficient way to stay warm: Sew high-tech heating patches to your clothes

A question of time