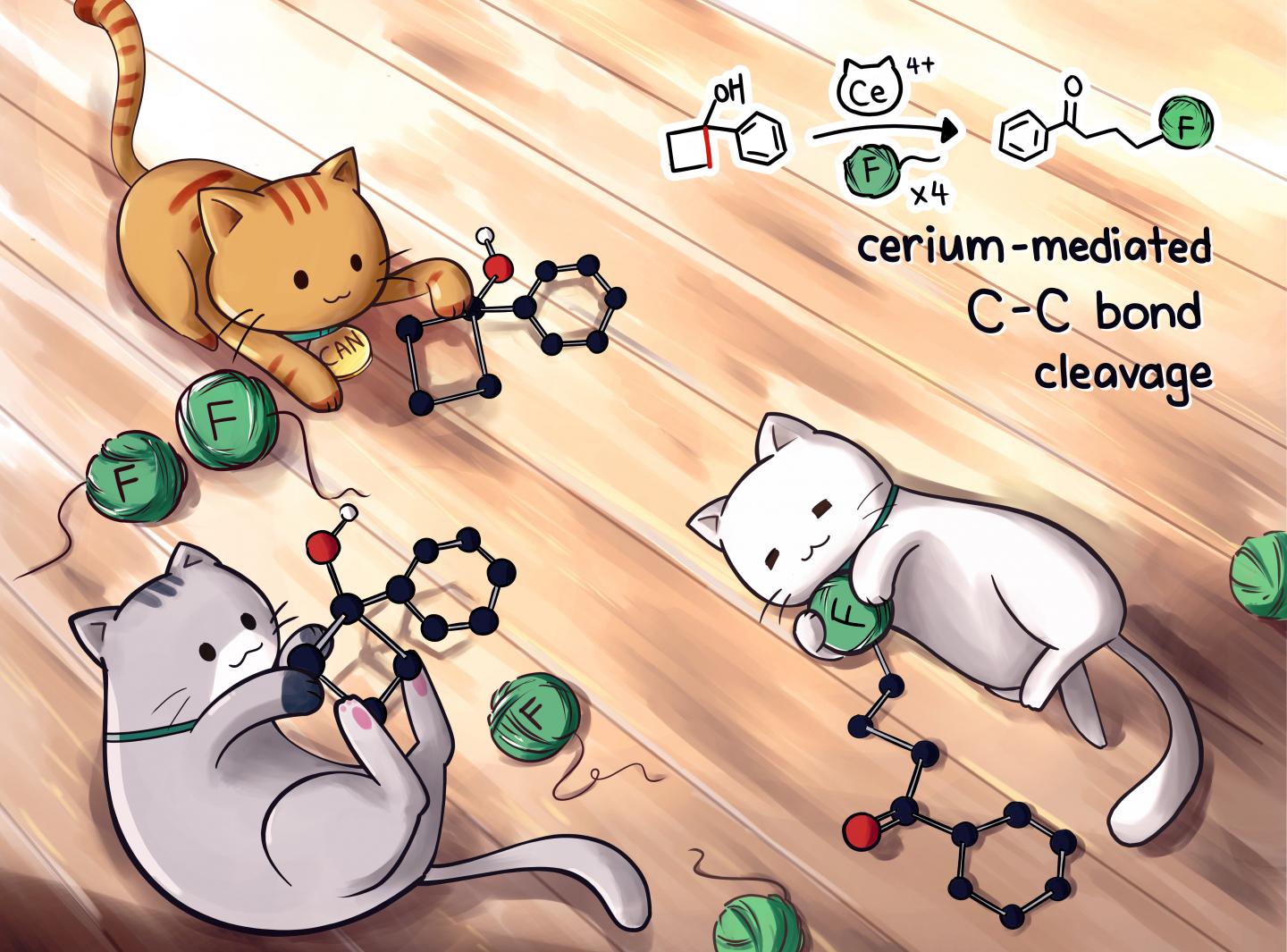 Rice chemist Julian West and graduate students Yen-Chu Lu and Helen Jordan introduced a process for the rapid and scalable synthesis of fluoroketones that have until now been challenging and expensive to make.

Their open-access work graces the cover of the Feb. 21 issue of the Royal Society of Chemistry journal ChemComm.

The lab’s new process replaces silver with cerium-based ceric ammonium nitrate (CAN), which produces functional precursors under mild conditions in about 30 minutes.

“We could make batches of this in a bathtub,” West said.

Cerium has demonstrated such potential in other labs, and the fact that it’s 800 times more abundant in the Earth’s crust than silver made it of great interest to the Rice team.

“Ketones are a gateway functional group in molecules that you can use to make different things, like anti-cancer compounds,” said West, who came to Rice in 2019 with funding from the Cancer Prevention and Research Institute of Texas and was named a Forbes 30 Under 30 science “game changer” last year.

“They’re a great foothold to turn into an alkene or an aromatic ring,” he said. “The important part of this paper is that we’re incorporating fluorine into these fragments. Fluorine is an interesting element and quite abundant, but it’s barely used in biology.

“Fluorine has some extreme properties: It’s incredibly electronegative, so it holds onto its electrons,” West said. “That makes it hard for enzymes in biological processes to deal with them in pharmaceuticals like anti-cancer molecules.”

Hydrogen atoms in drug molecules are easy for the liver to process, but replacing them with fluorines “is like armor plating at that position,” he said. “That helps drugs last far longer in the body, so you don’t have to take as much. That’s desirable for chemotherapeutics.” He noted that atorvastatin (aka Lipitor), one of the most commonly prescribed drugs in the United States, incorporates fluorine for the same purpose.

“We want to put fluorine in specific places in the molecule where we know it will make a difference, and this ketone functional group allows us to do it,” West said. “People have been using a silver catalyst, but the process requires a lot of silver, it takes a long time at high temperature and it has to be done under a carefully controlled nitrogen or argon atmosphere.

“Our process is cheap bucket chemistry, and we think the reaction is done in about five minutes,” he said. “But we leave it for 30, just to be safe.”

The process is highly scalable. “When Yen-Chu tripled the initial recipe, he got the exact same result,” West said. “That’s rare in these kinds of reactions.”

Read the paper at https://pubs.rsc.org/en/content/articlelanding/2021/cc/d0cc08183c#!divAbstract.

This news release can be found online at https://news.rice.edu/2021/02/26/cerium-sidelines-silver-to-make-drug-precursor/

A mild process discovered by Rice University chemists could replace difficult, silver-based catalysis to create valuable fluoroketones, a precursor in the design and manufacture of drugs. (Credit: Illustration by Renee Man/@chemkitty)