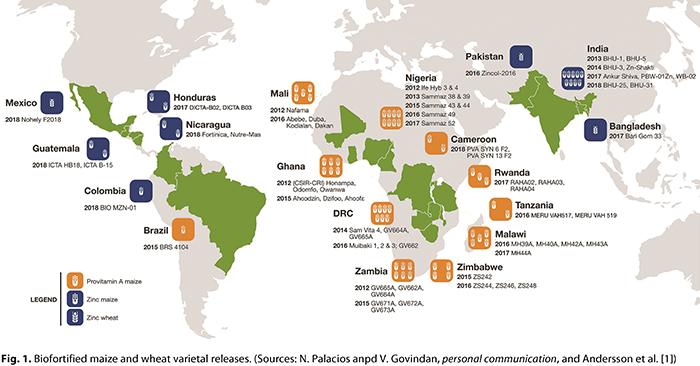 After a prolonged decline, global hunger is on the rise–affecting more than 820 million individuals in 2017. Additionally, more than 2 billion people suffer from “hidden hunger,” which occurs when individuals eat foods that don’t provide the nutrients they need to lead healthy, productive lives. Children who suffer from hidden hunger have more difficulty developing to their full mental and physical potential.

Hidden hunger is more prevalent in developing countries that rely heavily on staple crops like wheat, maize, and rice. These populations often do not have access to nutrient-rich foods, such as fruits, vegetables, and fish, and tend to suffer from vitamin A and zinc deficiencies. Vitamin A deficiencies can lead to vision-related disorders, such as corneal scarring and blindness, while zinc deficiencies increase the risk of diarrheal diseases, pneumonia, malaria, and even mortality.

Global demand for staple crops like maize, wheat, and rice is on the rise–making these crops ideal targets for improving nutrition through biofortification. Biofortification is the process of developing micronutrient-dense staple crops by combining traditional breeding practices with modern biotechnology.

Biofortification crop systems are highly sustainable one-time investments–the varieties developed and released will continue to grow annually, even without government attention or external funding, and breeding for higher levels of vitamin A and zinc does not penalize yield. There are currently 290 varieties of 12 biofortified crops, including rice, wheat, maize, that target the low-income households who rely on these staple crops and may suffer from hidden hunger.

“Maize and wheat are excellent targets for biofortification because they are widely cultivated, have wide agroecosystem coverage, are important in diets and trade, have useful native genetic variation for improving micronutrient density in the grain, and have a long history as subjects of breeding and genetic research,” according to the authors of “Improving Nutrition through Biofortification: Preharvest and Postharvest Technologies,” published in Cereal Foods World.

Organizations such as the International Maize and Wheat Improvement Center (CIMMYT), HarvestPlus, and the International Institute of Tropical Agriculture have worked to develop provitamin A-enriched maize varieties and zinc-enriched maize varieties, which have been released in South America and Africa. These organizations have also worked on enhancing levels of iron and zinc in wheat grain, releasing six biofortified wheat varieties in Pakistan and India in recent years.

Biofortification is one way to address hidden hunger, but it is not without challenges. According to the Cereal Foods World article, “To realize their full potential, biofortified maize and wheat varieties must be integrated as a core products in research, policy, and food value chains for these crops, which implies that all participants in the value chain, particularly farmers and consumers, must be convinced of their value.”