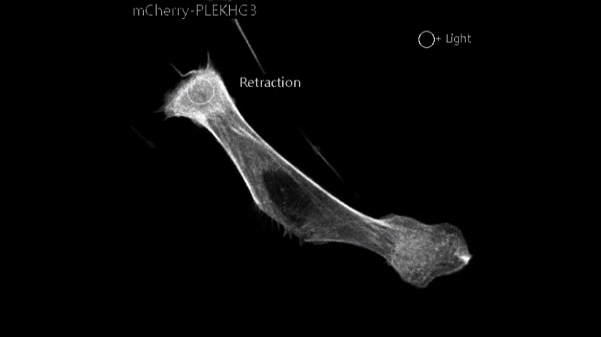 Similarly to cars, cells need a steering mechanism that guides them towards a certain target or direction. Scientists at the Center for Cognition and Sociality (Institute for Basic Science, IBS), and KAIST, led by Prof. HEO Won Do, have discovered the function of a key protein involved in cells’ movement and clarified how cells migrate. These findings recently published in PNAS provide a deeper understanding of cells’ movement and can benefit several biological fields, such as cancer, immunological and neurological research.

Development, tissue repair, immunity, among others require cells to migrate. For example, in the case of wounds, fibroblasts, the main cells of the connective tissue, need to crawl towards the wound in order to deposit molecules that give structure and support to the new tissue. By studying fibroblasts’ short journey, IBS scientists discovered that a protein called PLEKHG3 (PI3K-regulated RhoGEF), whose function was previously unclear, plays a key role in cell migration. Indeed, while cars have steering wheels and rear gears to control direction, a cell, before moving, needs to determine which is its front and rear at any given time. This is called cell polarity and it is obtained by the collection of certain molecules in one side of the cell. Some molecules are needed mainly at the front of the cell, while others are concentrated at the rear. Once polarity is established, the front side moves forward and the rear is pulled on. IBS scientists induced fibroblasts to overproduce PLEKHG3 and then observed an accumulation of this protein at the front edge of the fibroblasts that helps cells move forward twice as fast as fibroblasts that do not overproduce this protein.

The appearance of moving fibroblasts has a characteristic fan-like shape where the larger side represents the front edge. In order to confirm that PLEKHG3 is needed for cell polarity, scientists from the Center for Cognition and Sociality removed PLEKHG3 from some fibroblasts and observed their behavior. Cells lacking PLEKHG3 lost the fan-like shape and moved slower. Moreover, using an optogenetic technique called LARIAT previously developed by the same lab, the researchers were able to control the function of PLEKHG3 using light. When cells are illuminated with a blue light, PLEKHG3 proteins, coupled with a blue light receptor, cluster together and stop functioning. Removing this light brings cells back to their normal shape and polarity. In addition, scientists have also used another optogenetic tool to change the location of PLEKHG3 within the cells and can manipulate their direction of migration.

“PLEKHG3 is unique because it promotes cell migration by inducing cell polarity. Because PLEKHG3 is very important for cell movement, we want to continue to study it in other types of cell, including neurons. We predict that this protein may play a role in neuronal plasticity during learning and memory processes,” concludes Prof. Heo.