New research by a City College of New York team has uncovered a novel way to combine two different states of matter. For one of the first times, topological photons—light—has been combined with lattice vibrations, also known as phonons, to manipulate their propagation in a robust and controllable way. 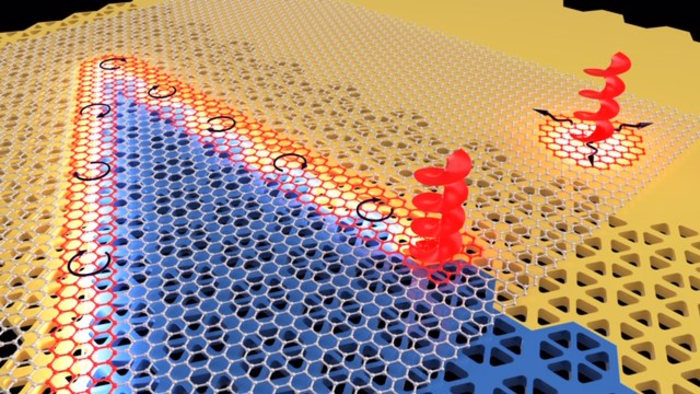 New research by a City College of New York team has uncovered a novel way to combine two different states of matter. For one of the first times, topological photons—light—has been combined with lattice vibrations, also known as phonons, to manipulate their propagation in a robust and controllable way.

The study utilized topological photonics, an emergent direction in photonics which leverages fundamental ideas of the mathematical field of topology about conserved quantities—topological invariants—that remain constant when altering parts of a geometric object under continuous deformations. One of the simplest examples of such invariants is number of holes, which, for instance, makes donut and mug equivalent from the topological point of view. The topological properties endow photons with helicity, when photons spin as they propagate, leading to unique and unexpected characteristics, such as robustness to defects and unidirectional propagation along interfaces between topologically distinct materials. Thanks to interactions with vibrations in crystals, these helical photons can then be used to channel infrared light along with vibrations.

The implications of this work are broad, in particular allowing researchers to advance Raman spectroscopy, which is used to determine vibrational modes of molecules. The research also holds promise for vibrational spectroscopy—also known as infrared spectroscopy—which measures the interaction of infrared radiation with matter through absorption, emission, or reflection. This can then be utilized to study and identify and characterize chemical substances.

“We coupled helical photons with lattice vibrations in hexagonal boron nitride, creating a new hybrid matter referred to as phonon-polaritons,” said Alexander Khanikaev, lead author and physicist with affiliation in CCNY’s Grove School of Engineering. “It is half light and half vibrations. Since infrared light and lattice vibrations are associated with heat, we created new channels for propagation of light and heat together. Typically, lattice vibrations are very hard to control, and guiding them around defects and sharp corners was impossible before.”

The new methodology can also implement directional radiative heat transfer, a form of energy transfer during which heat is dissipated through electromagnetic waves.

“We can create channels of arbitrary shape for this form of hybrid light and matter excitations to be guided along within a two-dimensional material we created,” added Dr. Sriram Guddala, postdoctoral researcher in Prof. Khanikaev’s group and the first author of the manuscript. “This method also allows us to switch the direction of propagation of vibrations along these channels, forward or backward, simply by switching polarizations handedness of the incident laser beam. Interestingly, as the phonon-polaritons propagate, the vibrations also rotate along with the electric field. This is an entirely novel way of guiding and rotating lattice vibrations, which also makes them helical.”