Researchers led by Osaka University show that collagen maturation regulates the availability of PEDF, a secreted protein that influences whether a cell lives or dies 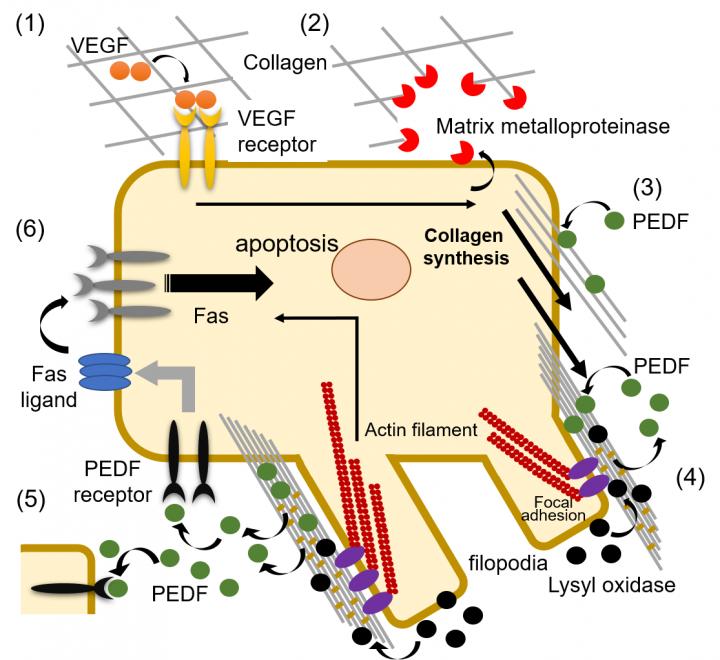 Osaka, Japan – Cells are like tiny self-contained machines that are constantly fine-tuned in response to both internal and external signals. Some of these signals are induced by extracellular ligands, specialized proteins that bind to specific receptors on the cell surface, stimulating signaling pathways and altering gene expression.

One such ligand, called pigment epithelium-derived factor, or PEDF for short, is involved in multiple biological functions. Depending on which of its many cellular receptors it binds to, and even the timing of the binding, PEDF can either promote cell survival or trigger cell death. But until recently, researchers had no idea how PEDF itself was regulated.

In a study published in scientific journal PNAS, a research team led by Osaka University finally explain how cells make sure PEDF is in the right place at the right time.

Collagen is one of the most abundant proteins in the web-like structure called the extra-cellular matrix that surrounds human cells. This tangle of proteins and carbohydrates not only helps hold cells together, but also allows them to communicate with one another. As cells mature, the collagen matrix undergoes remodeling, characterized by tighter binding between collagen fibrils.

“The crystal structure revealed that PEDF binds to a cryptic site on the surface of type I collagen, where it is sequestered away from the cellular receptors,” says Kawahara.

However, the researchers also found that a lysine residue in the binding site is involved in the crosslinking of collagen chains during collagen remodeling.

“We showed that PEDF binds to newly synthesized collagen but is gradually displaced as crosslinking increases,” says senior author Yuji Kobayashi. “In this way, collagen controls the spatiotemporal accessibility of PEDF, regulating its interaction with target cell surface receptors.”

PEDF has known anti-tumor and anti-angiogenic activities. Interestingly, the researchers found that PEDF selectively destroys developing vessels by binding to the newly synthesized collagen that is abundant on endothelial cells, which may then allow interaction with cellular receptors. This activity likely helps maintain homeostasis during tissue remodeling.

The researchers hope that this new information on the spatiotemporal control of PEDF will help in the development of novel therapies for cancer and vascular disease, as well as in the design of therapeutic biomaterials that target angiogenesis.

The article, “Spatiotemporal regulation of PEDF signaling by type I collagen remodeling,” was published in Proceedings of the National Academy of Sciences of the United States of America at DOI: https://doi.org/10.1073/pnas.2004034117.