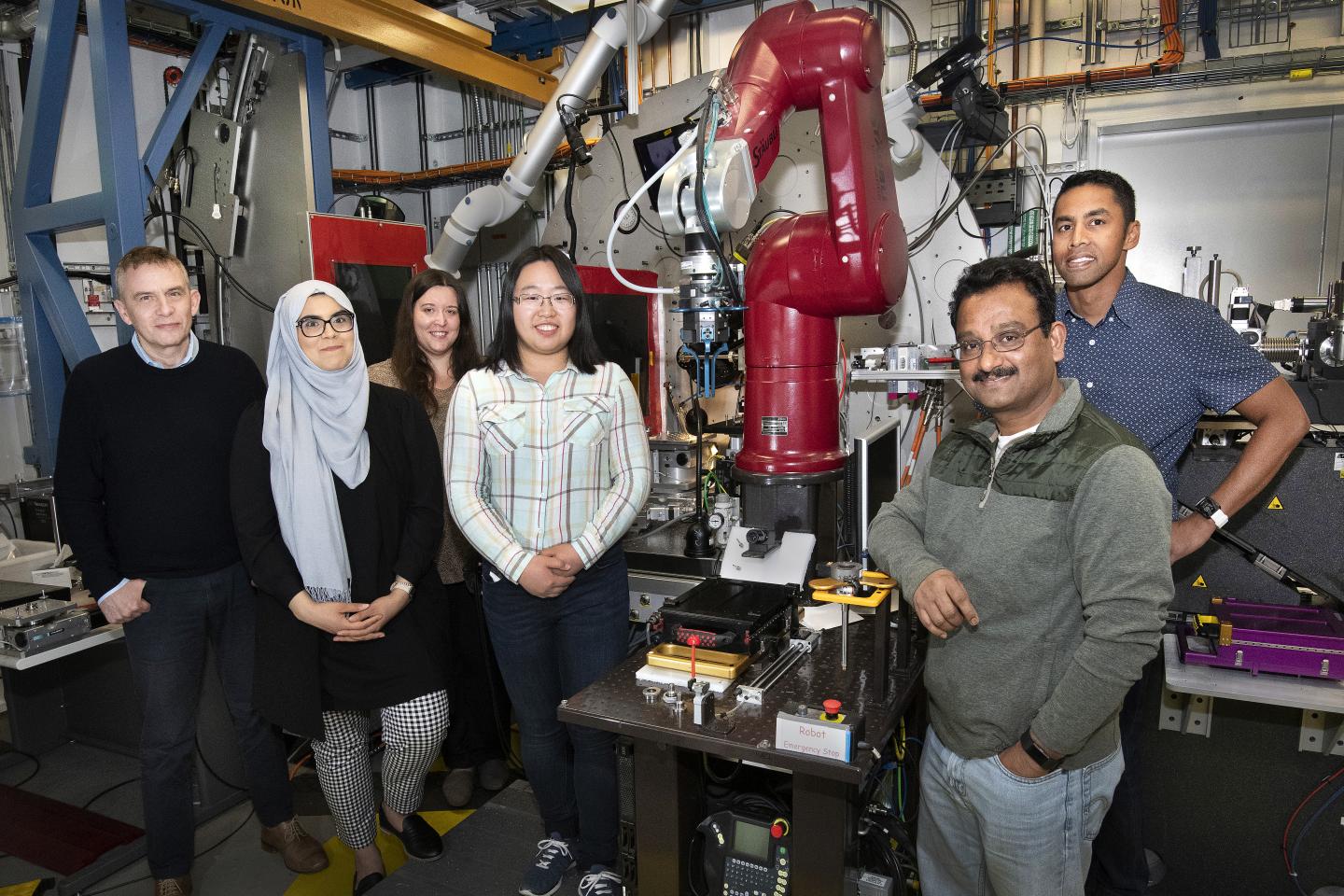 A team of scientists including researchers at the U.S. Department of Energy’s (DOE) Brookhaven National Laboratory has studied a catalyst that decomposes nerve agents, eliminating their harmful and lethal effects. The research was published Friday, April 19, in the Journal of Physical Chemistry Letters.

“Our work is part of an ongoing, multiagency effort to protect soldiers and civilians from chemical warfare agents (CWAs),” said Anatoly Frenkel, a physicist with a joint appointment at Brookhaven Lab and Stony Brook University and the lead author on the paper. “The research requires us to understand molecular interactions on a very small scale, and to develop special characterization methods that are capable of observing those interactions. It is a very complex set of problems that also has a very immediate societal impact.”

Finding the best method of decontamination

Since CWAs were first used in World War I, scientists have been testing multiple methods of mitigating their toxic effects. One of the most common methods is filtration–using an absorbent material, like a sponge, that would prevent the chemicals from spreading.

“The usefulness of the filtration method is limited, because once a filter reaches its capacity, it needs to be regenerated, removed, or replaced,” Frenkel said. “We believe a better approach would be to decompose the CWA with a catalyst, making the chemical harmless, while reusing the catalyst afterwards.”

To dive deeper into this approach, the research team focused on the decontamination of sarin, a nerve agent that prevents muscles from contracting and relaxing. Sarin inhibits an important enzyme in the body that plays a critical role in transmitting neuronal signals to the muscles. If those signals are compromised, muscles remain in the contracted form, which becomes fatal as key muscles, such as the heart, are unable to move.

“Our focus is to develop smart air filters that destroy sarin before the molecules even reach an individual,” said Virginia Tech scientist John Morris, who assembled the research team. “New catalysts that actively decompose toxins in the air would be used to protect both soldiers and civilians from the devastating effects of chemical warfare.”

To make the decomposition method effective, the researchers needed to identify a catalyst that could break down sarin efficiently, but also one that has longevity–a catalyst that would not be inhibited too quickly or create a reaction product that would block active sites and render the catalyst ineffective.

In previous studies, chemists identified a group of materials called polyoxometalates (POMs) as a good candidate for decomposing nerve agents. Now, Frenkel and his team have tested a unique material, prepared by team members from Emory University, that has zirconium atoms connecting two POM molecules together.

“To identify why a catalyst works, you have to find its active site,” Frenkel said. “We hypothesized that the isolated zirconium atoms were the active sites for this catalyst. To test that theory, we analyzed the material not just by one method, but by many characterization techniques–a multimodal approach that enabled us to isolate the active molecules from ones that are not changing during the reaction.”

Additionally, their experiments were conducted under the real-life conditions in which sarin would be found–the gas phase. Previous research on POM catalysts for CWA decontamination had only been conducted in the liquid phase.

All the experiments were conducted using a harmless sarin gas simulant. “It is important to recognize that hazardous materials like nerve gases cannot be easily studied in conventional research facilities, such as Brookhaven Lab,” Frenkel said. “So, in the field of CWA decontamination research, scientists do not work with real nerve agents but with simulants that mimic their activity without causing harm.”

To confirm their simulant behaved in the same manner as sarin, the research team’s experiments were repeated with actual sarin by the U.S. Army’s CCDC Chemical Biological Center (CBC) at Aberdeen Proving Ground.

“Coupling our measurements with the ability to perform agent testing under identical environmental conditions enabled us to validate the simulant work and fully understand how the POM adsorbs and reacts with chemical warfare agents,” said Wesley Gordon, a co-author of the paper.

Studying the catalyst from a multimodal approach

For the first study at Brookhaven, the researchers conducted x-ray photoelectron spectroscopy (XPS)–a research technique that uses ultrabright x-rays to measure the elemental composition of a sample.

“XPS is a technique that is sensitive to the kinetic energy of a photoelectron that is expelled from a material when it is hit by the ultrabright x-rays,” said Frenkel. “Using this technique, we observed a change in the charge state of the zirconium atom in the molecule, which tells us that it is the zirconium in the catalyst that reacts with the nerve agent.”

“At NSLS-II, we used a technique called in situ x-ray diffraction to reveal long-range ordering or disordering in the atomic structures,” said Sanjit Ghose, beamline scientist at NSLS-II’s X-ray Powder Diffraction (XPD) beamline, where the research was conducted. “Comparing the diffraction patterns clearly showed the disordering of the zirconium-POM crystal lattice with the adsorption of the simulant molecules.”

At SSRL, a technique called x-ray absorption fine structure spectroscopy was used to identify changes in the local atomic environment around zirconium at different stages of the chemical reaction.

After correlating results from their suite of experimental techniques, the scientists discovered something surprising.

“Usually, a catalyst is a rigid structure that remains stable,” Frenkel said. “Initially, this catalyst was a dimer–two big molecules connected by two bridging bonds. It looked like a bicycle with two wheels and a frame connecting them. What we understood after looking at the catalyst with all these techniques is that the bicycle broke into two ‘wheels’ and the ‘frame’ was cut.”

Using computer models of the catalyst, the team’s computational chemists at Virginia Tech and Emory University determined that the structural changes exposed zirconium atoms to sarin, and the sarin-zirconium interactions were found to be responsible for the decomposition of the nerve agent.

“The process of breaking the dimer was equivalent to activating the catalyst,” Frenkel said.

At the next stage of research, the team will build on their results to design and optimize catalysts with isolated zirconium sites, based on other porous materials that have enhanced activity for decomposing CWAs.

Strawberries: The tasty fruit with a tainted environmental legacy and an uncertain…